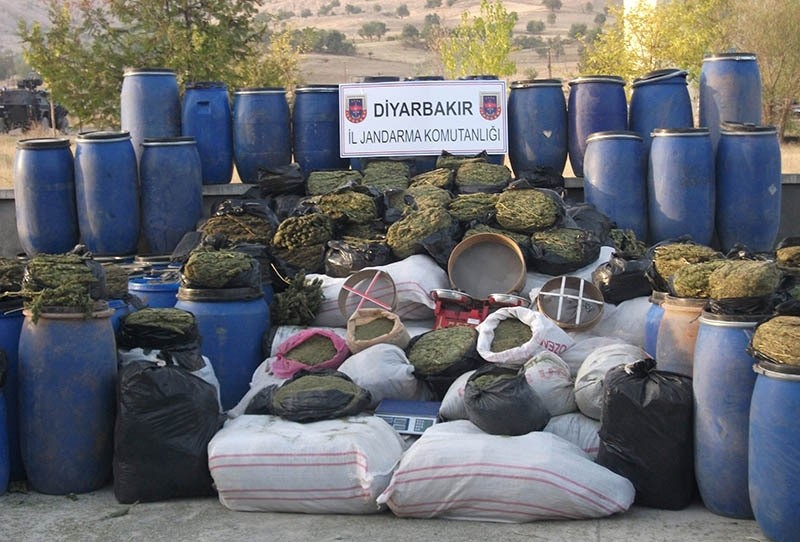 A report from the Interior Ministry revealed that the PKK terrorist organization rakes in more than $1.5 billion annually from drug production and trafficking. The report was announced while ongoing crackdown on group’s drug operations in the southeast intensifies

Lice, a town in the southeastern city of Diyarbakır, has seen heavy military presence this week. Flanked by helicopters, troops swept through acres of cannabis fields hidden in plain sight in secluded areas of the district.

The operations shed light on how the PKK terrorist organization rakes in profit from drug cultivation in Lice, and now an Interior Ministry report revealed that the organization earns more than $1.5 billion a year from the cultivation and smuggling of narcotics.

The terrorist organization has escalated attacks against the army, police and civilians since last summer, after it unilaterally ended a fragile two-year cease-fire which saw militants withdraw from the Turkish territories, although they covertly stored weapons across Turkey. Following a string of brutal attacks in the southeast and big cities, attention turned to how the small faction, whose leaders hide out in Northern Iraq, finances such bloody operations.

A report from Anadolu Agency based on Interior Ministry sources shows that the terrorist group is heavily involved in the drug trade, from the production of narcotics to their delivery, distribution and sales. This "narco-terrorism" brings in massive revenues for the PKK, particularly cannabis production in the southeast, where PKK activities are concentrated.

The army announced yesterday that during operations in Lice, troops found over 6 million cannabis plants, hidden in the fields where they were blocked from prying eyes by being planted between other plants.

Lice has long been at the center of local drug production in Turkey. The PKK has been accused of controlling drug production and trade in the region. In July 2013, security forces destroyed around 2 million cannabis plants in Lice in a major counter-narcotics operation. According to intelligence reports detailing the drug trade, Lice is the main base for the terrorist organization's cultivation of cannabis for the production of hashish, one source of income for the group. Counter-narcotics operations and tightened security measures have led to a decline in profits from the drug trade.

Experts say Lice and the southeastern region is favored for cultivation of cannabis, because its climate is favorable and because the mountainous terrain hinders easy access by security forces. Although no concrete numbers are available, authorities believe about two-thirds of the illegal cannabis cultivated in Turkey is grown around Diyarbakır.

Yesterday's report says the PKK produces heroin in laboratories in the camps in Northern Iraq and sells the heroin in Europe through supporters on the continent.

The annual revenue from cannabis production and sales is around 500 million TL ($170 million), and another $1.5 billion is raked in from drug trafficking.

The report reveals that the testimony of people arrested in anti-drug operations across Turkey, the documents and drugs seized during such operations "clearly showed links from the PKK to narcotic crimes."

Police have arrested 1,283 suspects and found six drug manufacturing plants in over 350 "narco-terrorism" operations held across the country between 1984 and 2015, according to the report.

The PKK is engaged in a campaign of terror since last summer after unilaterally breaking a truce with Turkey, following decades of violence. Hundreds of troops, police officers and civilians were killed, while Turkey responded by pounding PKK targets in Northern Iraq and large-scale operations in southeastern and eastern Turkey where the PKK has concentrated attacks, which have killed hundreds of militants.