Coup attempt brings thousands onto streets in Europe, US 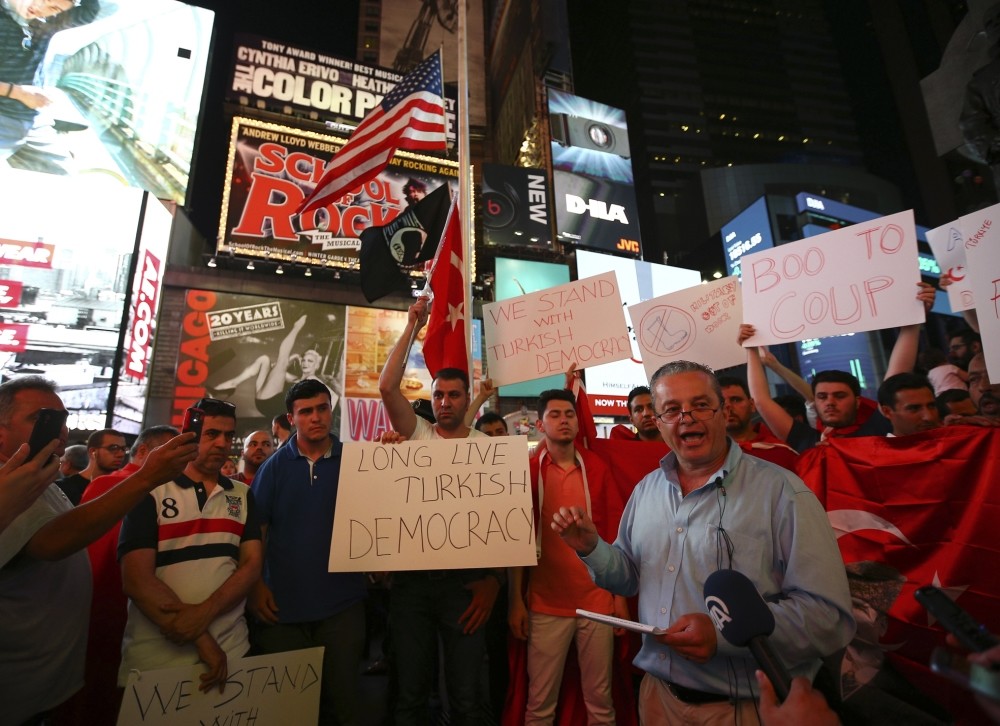 Hours after an attemted coup that was quelled by the government, demonstrators took to the streets in European and U.S. cities to protest and show support for Turkey's elected government

Thousands gathered in Europe and in the U.S. early Saturday to protest against a coup attempt in Turkey and to show their support to the government that quelled it.

Some 3,000 demonstrators gathered in front of the Turkish embassy in Berlin at night, waving Turkish flags and wearing T-shirts emblazoned with "Türkiye" (Turkey). Germany is home to large Turkish communities.

"This is not about politics, this is about the country," one of the participants in Berlin said. Demonstrators started leaving the gathering when news came that the coup attempt by parts of the army against President Recep Tayyip Erdoğan had failed.

In Vienna, 4,000 Erdoğan supporters came together at the Turkish embassy and marched through the city center.

Hundreds of Turkish Americans alongside American Muslims also converged on the White House on Friday to protest a coup attempt in Turkey.

Chanting slogans in support of Turkey's democratically elected government and Erdoğan, the group urged respect for democracy in the country.

"We are here to stand against the uprising against democracy in Turkey. We stand with our people of Turkey," said Yaşar Çolak, president of the Diyanet Center of America that was inaugurated by Erdoğan in April.

A minority group controlling some military assets, including helicopters and fighters jets, tried to wrest control of the country. A helicopter controlled by coup plotters fired at civilians and threw bombs onto the grounds of Parliament in Ankara. Çolak said those responsible for bombing the Parliament will suffer the consequences.

Muslims Americans with origins from Syria, Palestine, Egypt and other countries also joined the group. Speaking to the press, Executive Director of Council on American Islamic Relations (CAIR) Nihad Awad said he joined the group to send a message to the junta that he condemned any attempt to topple a democratically elected government. "This coup is not an assault only on democracy, it is an assault on the national sovereignty of Turkey," Awad said.

A similar scene played out in New York's Time Square where hundreds of Turks were joined by Muslims from Egypt, Syria, Palestine, Azerbaijan, Tajikistan and Americans to protest the attempted overthrow of the government in Ankara.

The group waved Turkish flags while they chanted patriotic slogans in solidarity with Erdoğan, and sang the Turkish national anthem.

"They use their guns not to protect their people, but to kill their people," Samy Ahmed, 31, an Egyptian graduate student at City University of New York told Anadolu Agency. "They tried to make a coup against the elected president of Turkey, Recep Tayyip Erdogan," he said, adding "All people who stand for freedom, democracy, social justice and human rights came here to support Turkey and stand behind it."

Turkish national Ahmet Yiğit, 28, who owns a consultancy firm focused on business and trade and condemned the coup, said he was shocked when he first heard.

"As a person who graduated from an American University, I see that people in the U.S. are trying to improve themselves by studying science. Those soldiers who attempted the coup have to change their mindset," he said. "Turkey is the only safe haven in the Middle East, where there is bloodshed. We, the Turkish people who live abroad, are behind our government and nation," he added.

Forty-seven-year-old community activist Ibrahim Kurtuluş, 47, read a prepared statement in front of the group of protesters and promoted democracy, the will of the people and called for the U.S. to stand with its NATO ally. "We are against any kind of coup ... we feel the Turkish military has been hijacked ... [we] will not allow the freely elected government of Turkey to be taken over," he said. Kurtuluş called on the U.S. to stand with the elected government of people, and stressed "we firmly believe that the best foundation for lasting stability in our NATO ally of Turkey is a democratic political order."

He concluded by emphasizing that the voices of people who protest peacefully must be heard.

The coup attempt was also protested in London, the U.K., Sarajevo, and Toronto. Meanwhile, Turks in the U.S. were also reportedly set to hold a protest in front of Fetullah Gülen's mansion in Pennsylvania.

Prime Minister Binali Yıldırım acknowledged late Friday a group within Turkey's military was engaged in what appeared to be an attempted coup, as army units blocked entrances to the Bosporus and Fatih Sultan Mehmet bridges connecting Istanbul's European and Asian sides, while military jets were flying over the capital Ankara.

Erdoğan slammed United States-based preacher Fetullah Gülen, who is accused of leading a terrorist organization and attempting to infiltrate and overthrow the democratically-elected government.

"It is enough the betrayal you have done to this nation," Erdoğan said, without mentioning Gülen's name, and calling on him to return to Turkey to face trial.

Acting Chief of Staff Ümit Dündar said on Saturday that the Turkish Armed Forces have immediately brought down the coup attempt by the Gülenist Terror Organization. Speaking in a press conference in Istanbul, newly appointed acting Chief of Staff Dündar said that the commanders seized by coup plotters have been taken to an unknown location and that coup attempt was largely by troops from the Turkish Air Forces. ''Turkey has shown the world its commitment to democracy,'' Dündar said and added that the Turkish people who sided with democracy and rule of law thwarted the attempt, while saying those who took part in the betrayal will not go unpunished.
RELATED TOPICS