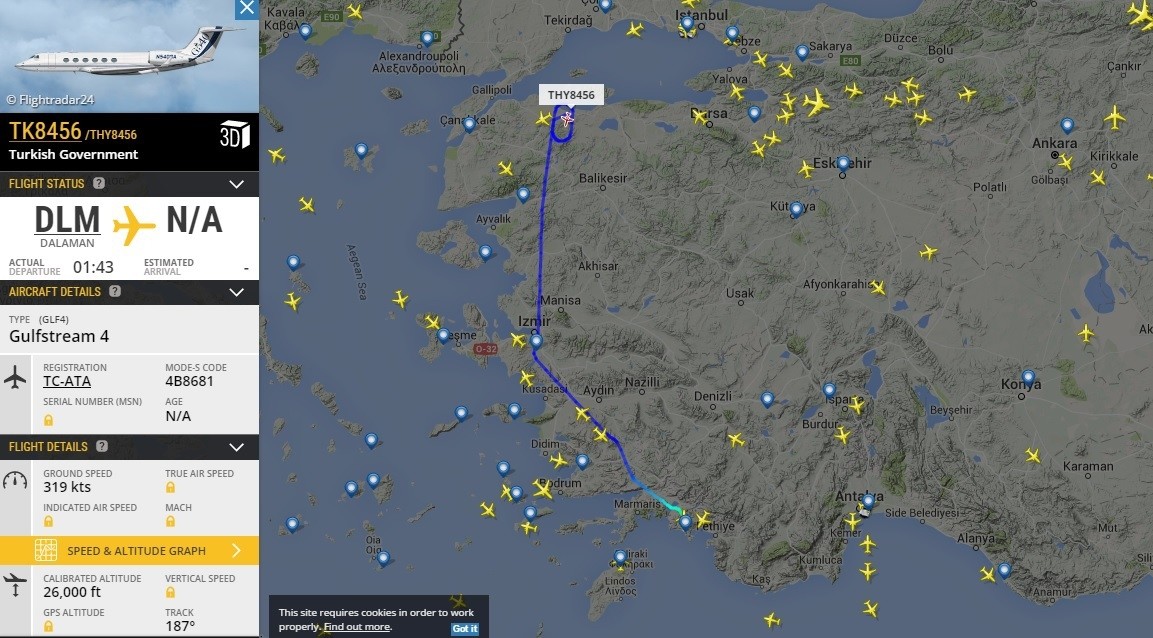 | DHA Photo
by Daily Sabah with Reuters Jul 17, 2016 12:00 am
At the height of the attempt to overthrow Turkish President Tayyip Erdoğan, the pro-coup pilots of two F-16 fighter jets had Erdoğan's plane in their sights. And yet he was able to fly on.

The Turkish leader was returning to Istanbul from a holiday near the coastal resort of Marmaris after a faction in the military launched the coup attempt on Friday night, sealing off a bridge across the Bosphorus, trying to capture Istanbul's main airport and sending tanks to parliament in Ankara.

"At least two F-16s harassed Erdoğan's plane while it was in the air and en route to Istanbul. They locked their radars on his plane and on two other F-16s protecting him," a former military officer with knowledge of the events told Reuters.

A senior Turkish official confirmed to Reuters that Erdoğan's business jet had been harassed while flying from the airport that serves Marmaris by two F-16s commandeered by the coup plotters but that he had managed to reach Istanbul safely.

A second senior official also said the presidential jet had been "in trouble in the air" but gave no details.

Turkey's Justice Minister Bekir Bozdağ also gave details about the most heated moments of the attempt to overthrow President Erdoğan, saying the president risked death after ordering his pilot to land in Istanbul secretly.

Speaking in a televised interview, Bozdağ said Erdoğan decided to go to Istanbul to meet Turkish people flocked to the streets to resist coup even though the Atatürk Airport was largely under the control of the coup soldiers.

"Erdoğan asked the pilot of his business plane whether he can make a landing by only using the plane's lights and without a permission to taxi from tower," Bozdağ said.

Bozdağ continued: "Pilot said the landing can be conducted but warned Erdoğan of possible risks. The president then ordered the pilot to fly to Istanbul, meanwhile the Turkish people recaptured the airport from coup soldiers,"

Erdoğan said as the coup unfolded that the plotters had tried to attack him in the resort town of Marmaris and had bombed places he had been at shortly after he left. He "evaded death by minutes", the second official said.

Around 25 soldiers in helicopters descended on a hotel in Marmaris on ropes, shooting, just after Erdoğan had left in an apparent attempt to seize him, broadcaster CNN Turk said.

Prime Minister Binali Yıldırım had also been directly targeted in Istanbul during the coup bid and had narrowly escaped, the official said, without giving details.

Flight tracker websites showed a Gulfstream IV aircraft, a type of business jet owned by the Turkish government, take off from Dalaman airport, which is about an hour and a quarter's drive from Marmaris, at about 2240 GMT on Friday.

It later circled in what appeared to be a holding pattern just south of Istanbul, around the time when a Reuters witness in the airport was still hearing bursts of gunfire, before finally coming in to land.

Gunfire and explosions rocked both Istanbul and Ankara through Friday night, as the armed faction which tried to seize power strafed the headquarters of Turkish intelligence and parliament in the capital. At one point it ordered state television to read out a statement declaring a nationwide curfew.

But the attempt crumbled as forces loyal to Erdoğan pushed the rebels back and as the Turkish leader, at one point appearing on broadcaster CNN Turk in a video call from a mobile phone, urged people to take to the streets to support him.

More than 290 people were killed in the violence, 104 of them coup supporters, the rest largely civilians and police officers.

The aerial aspect of the plot appears to have centred on the Akinci air base around 50 km (30 miles) northwest of Ankara, with at least 15 pilots involved under the orders of a rebel commander, according to the former military officer.

The head of the armed forces, Hulusi Akar, was held hostage at the base during the coup attempt but was eventually rescued. Jets from Akıncı, piloted by the coup plotters roared low over Istanbul and Ankara repeatedly during the chaos of Friday night, shattering windows and terrifying civilians with sonic booms.

Fighter jets taking off from another air base at Eskişehir, west of Ankara, were scrambled to bomb Akinci and try to stop the pro-coup soldiers. However, the rogue aircraft were able to keep flying through the night by refuelling mid-air after a tanker plane was commandeered, the first senior official said.

The tanker aircraft was taken from the Incirlik air base in southern Turkey, which is used by the U.S.-led coalition to bomb Daesh in Syria and Iraq. The commander of Incirlik was detained on Sunday for complicity, the official said.
Last Update: Jul 17, 2016 9:30 pm
RELATED TOPICS