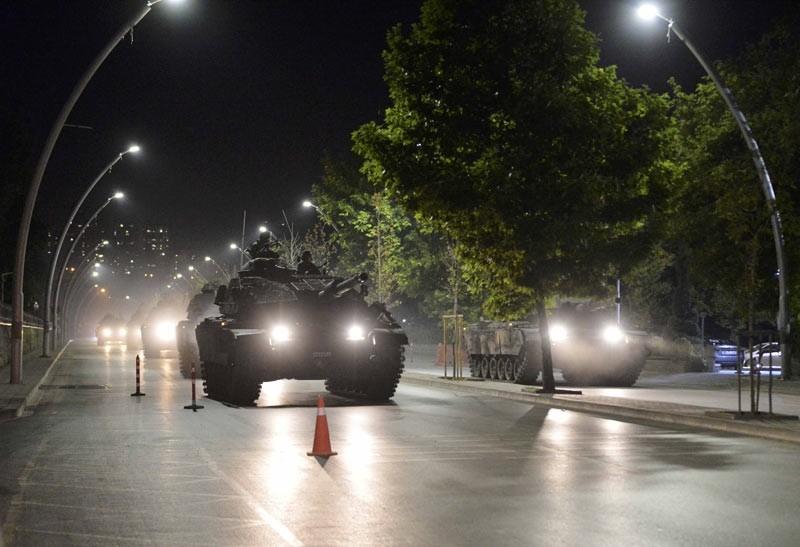 The United States called on all parties in Turkey to support President Tayyip Erdogan's government against a coup attempt as world leaders expressed concern about the upheaval in a NATO member country that bridges Europe and the Middle East. President Barack Obama and Secretary of State John Kerry spoke by phone and gave their support to Erdoğan after Turkey's military said it had seized power on Friday.

"The President and Secretary agreed that all parties in Turkey should support the democratically-elected government of Turkey, show restraint, and avoid any violence or bloodshed," the White House said in a statement.

"I call for calm and restraint, and full respect for Turkey's democratic institutions and its constitution. Turkey is a valued NATO Ally," Stoltenberg said in a statement. "I have just spoken to the Turkish Foreign Minister Mevlüt Çavuşoğlu. I am following events in Turkey closely and with concern," he said.

U.N. chief Ban Ki-moon meanwhile lashed out against the attempted coup, as he called for civilian rule to be maintained. "Military interference in the affairs of any state is unacceptable," Ban said in a statement.

"The tensions in and challenges for Turkey cannot be solved with guns," EU President Tusk told reporters during an Asia-Europe summit in Mongolia.

"Military coups have no place in modern Turkey. There is no alternative to democracy and the rule of law."

"Turkey is a key partner for the European Union. The EU fully supports the democratically elected government, the institutions of the country and the rule of law," it added.

EU representatives at the gathering met earlier in the day to discuss the unfolding situation.

German Chancellor Angela Merkel meanwhile called for the "democratic order" in Turkey to be respected, her spokesman said.

"The democratic order in Turkey must be respected. Everything needs to be done to protect human lives," Merkel's spokesman Steffen Seibert said on Twitter. He said Merkel was in close contact with Foreign Minister Frank-Walter Steinmeier and Economy Minister Sigmar Gabriel and that Berlin supported Turkey's elected government.

"We are deeply concerned about the recent developments in Turkey," Steinmeier said. "I condemn in the strongest terms any attempts to change the democratic order in Turkey by force."

Steinmeier said all those responsible in Turkey must adhere to the democratic and constitutional rules and ensure that further bloodshed was avoided. "It is encouraging that the parties represented in the Turkish parliament declared their support for the democratic principles," Steinmeier said.

French Foreign Minister Jean-Marc Ayrault on Saturday condemned an attempted coup in Turkey and said he hoped its "democracy will emerge strengthened."

"The Turkish population showed its maturity and courage by committing to the respect of its institutions. It paid the price with many victims," he said in a statement.

"France hopes that calm can return quickly. It hopes that Turkish democracy will emerge reinforced by this test and that fundamental liberties will be fully respected," the statement said.

He said "without a doubt we support respecting the constitution and democratically elected institutions, and we condemn all coups without reservation."

Iran also said on Friday it was deeply concerned about the crisis in the neighboring country.

Afghan President Ashraf Ghani expressed support for Turkey's elected government, saying in a statement that "democratic elections are the most effective means for peaceful transfer of power."

"Militaristic options will only undermine democratic institutions, stability and development in the country," the statement from Ghani's office said.

"The source expressed the kingdom's welcome that things are returned to normal led by his Excellency President Tayyip Erdoğan and his elected government and in line with the constitutional legitimacy and the will of the Turkish people," SPA said.

Qatar congratulated Erdoğan on Saturday on apparently foiling a deadly coup attempt by the military against his rule.

In a telephone call with the Turkish leader, Qatari emir Sheikh Tamim bin Hamad al-Thani "congratulated (Erdoğan) on the support of the people of Turkey on his rule against the failed military coup," the official QNA news agency reported.

Sheikh Tamim "strongly condemned this failed attempt and voiced... (Qatar's) solidarity with Turkey... in all measures it takes to protect constitutional legitimacy, enforce the rule of law and preserve its security and stability."

Foreign Minister Peter Szijjarto said Hungary condemns the attempted coup "in the firmest way." "Based on the number of deaths and the way it was carried out, this attempted coup can be also called an act of terror," he said.

The Kremlin said it was gravely concerned about events in Turkey, and that it had instructed officials to help Russian nationals in Turkey return home at the earliest opportunity.

Kremlin spokesman Dmitry Peskov told reporters on a conference call that President Vladimir Putin was being kept constantly updated on the situation in Turkey.

"Moscow is most concerned at the latest events in Turkey," the foreign ministry said in a statement. Moscow confirmed its "readiness to work constructively with the legally elected leadership of Turkey in the interest of promoting bilateral relations," saying this particularly applied to "fighting the threat of terrorism."

British Foreign Minister Boris Johnson said on Saturday he had spoken to his counterpart in Turkey to underline the UK's support for the country's democratically elected government following an attempted military coup there.

The former mayor of London, who became foreign minister under the new government of Prime Minister Theresa May this week, also called for calm after monitoring the situation through the night.

"(We) remain very concerned about what's been going on there," he told broadcasters on Saturday. "First thing to say obviously is we want to urge calm, the avoidance of any further bloodshed and it is crucial that we support the democratic institutions of Turkey."

Johnson said he had spoken to his counterpart in Turkey, Mevlüt Çavuşoğlu, to reassure him of Britain's support for the government and the country's institutions. "He was very grateful for U.K.support at the U.N. and elsewhere," Johnson said.

Pakistan condemned the attempt to undermine democracy and rule of law and China's Foreign Ministry called on Turkey to restore order and stability as soon as possible.

The Japanese Prime Minister Shinzo Abe said Turkey's democracy must be respected, according to the Kyodo news agency.

China called on Turkey to restore order and stability as soon as possible after a coup attempt, state television cited China's foreign ministry as saying on Saturday. The ministry has so far not received any reports of Chinese citizens being injured there, state TV said, and has activated emergency mechanisms.

The only job of the army is to protect the country, the Chairman of Bosnia-Herzegovina's Presidency, Bakir Izetbegovic, said amid a coup attempt in Turkey late Friday.

"The army has no right to take over control," Izetbegovic told Anadolu Agency. "Those are threats to block Turkey's development and democracy."

"I believe that this attempt will not be successful this time. I want to say that my brother [President] Recep Tayyip Erdoğan and the Turkish people have strong support of Bosnia and Herzegovina," he said.

Izetbegovic urged Turks to stand by their president and government for democracy and the right to vote.

"The only way [way to get past this is] that people react to what happens," he said. "These people [soldiers] has to see what people want and how they feel," he added. "In any country, military taking control did not result in a good way. They should return to the barracks and obey the civil government."

Tsipras' diplomatic advisor sent the "message of support for democracy in Turkey" to his counterpart in neighboring Turkey, the source said. The two leaders were set to speak by telephone later Saturday, the source added.

Bulgaria is following developments in neighboring Turkey with concern and hopes that the situation there will be resolved in a lawful and democratic way, Bulgarian Prime Minister Boiko Borisov said.

The Balkan country has beefed up patrols along the border with Turkey after a coup attempt there. Turkey has closed the border crossings with Bulgaria and the foreign ministry appealed to Bulgarians to cancel their travel plans to Turkey.

"We are following what is happening at our neighbors with concern," Borisov told reporters at an emergency meeting with the defense and foreign ministers, as well as intelligence and security officials.

"Let's hope it will regularize in a lawful and democratic manner... There are ways to topple a government and that in the democratic world happens through elections," he said.

Bulgarian Foreign Minister Daniel Mitov spoke on the telephone with his Turkish counterpart and contacts were made by the special services, Borisov added.

The border crossings with Turkey on the Bulgarian side are open. A witness told private national BTV channel that entrance at Kapikule border crossing into Turkey is allowed, but exit towards Bulgaria is not and several cars with Bulgarians were blocked on Turkish territory.

Indonesian lawmakers have voiced support for democracy in Turkey after an attempted military coup. Indonesia's foreign ministry expressed concern Saturday over the situation in Turkey, as well as hope that the principles of democracy would be upheld.

"Indonesia emphasizes the importance of respect for the constitution and the principle of democratization," it said in a statement quoted by detik.com.

Leaders of Malaysia's opposition pact expressed "shock" at the attempted coup late Friday. "This military attempt to force regime change in Turkey is a blatant disregard for the democratic process and totally undermines the will of the Turkish people," the Hope Pact said in a statement, underlining its solidarity with Turkey's president and people. "We pray for the safety of the Turkish people who are now amassing on the streets as a show of support for democracy," it underlined. "We also call for a swift end to this attempted military coup, and a calm and restrained response by all sides."

Earlier, when the coup was underway, U.S. Secretary of State John Kerry said he hoped for stability and continuity in Turkey. Speaking at a news conference in Moscow after a day of talks on Syria with Russian Foreign Minister Sergei Lavrov, Kerry said he could not comment further on Turkey because he did not have the latest details of what was happening there.

However, after the coup was quelled, Kerry asserted the United States' "absolute support" for Turkey's democratically elected, civilian government and democratic institutions in a telephone call to Foreign Minister Mevlüt Çavuşoğlu. Kerry said he urged all parties to ensure the safety and well-being of diplomatic missions, personnel and civilians across Turkey. The U.S. State Department told U.S. citizens in Turkey to "shelter in place and stay indoors."