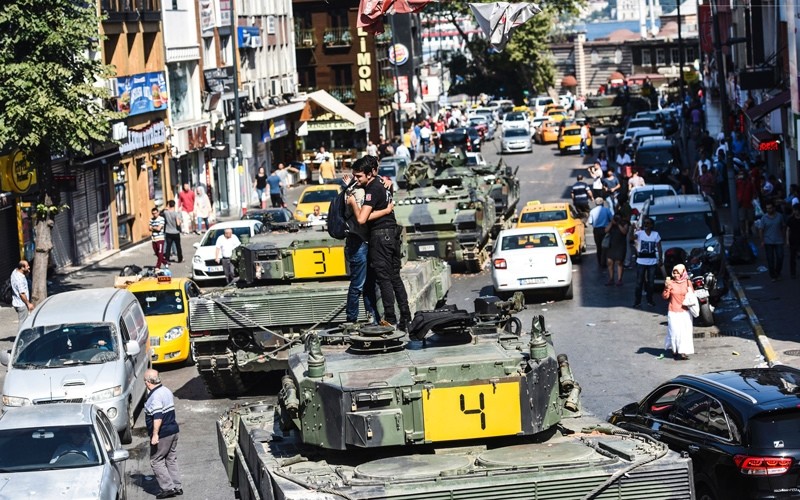 As heroic tales of civilians continue to emerge since the failed coup attempt in Turkey, one story in particular is drawing a lot of attention, anti-coup protesters managed to stop military tanks heading to Istanbul's Ataturk Airport on July 15, the day of the coup, by filling the vehicles' exhaust outlets with their clothes, according to the protestors themselves.

A chef at a restaurant in Istanbul, Danyal Şimşek, and the restaurant owner, Mehmet Şükrü Kintaş, told Anadolu Agency in Istanbul Thursday that they stopped almost 10 tanks this way.

The duo firstly set up a barricade with their cars to halt the tanks, and then stuffed the exhausts with their clothes.

Civilians brought many soldiers who were in the tanks to the police, as the soldiers had to leave after the exhaust gases filled the interior.

Kintaş added that the pro-coup soldiers had been headed to the airport.

"How can we stop this tank?" he said he asked the chef. A nearby mechanic then told them, "If you fill these exhausts, the tanks will stop."

Kintaş continued, "We took our clothes off. Everyone gave us their clothes and t-shirts. We plugged the exhausts with them and covered the top of the filters. So the tanks had to stop in two or three minutes."

Kintaş added that any security personnel can eat free in his 12 restaurants in Istanbul.

"The military personnel and police officers against the coup can visit any branch of my restaurants and eat as much as they want. Our brothers paid their checks on July 15 and 16," he added.

The chef said only one tank was able to evade them and go on to Ataturk Airport.

On the people who fought the coup, he said, "May God bless them all. There were hundreds of people there. We were only one of them."

Turkey's government has said the attempted coup was organized by followers of U.S.-based cleric Fetullah Gülen, who is accused of a long-running campaign to overthrow the state through infiltrating Turkish institutions, particularly the military, police, and judiciary, forming a "parallel state."

On July 15, a small military junta linked to the Gülenist Terror Organization (FETÖ) attempted to topple the democratically elected government in Turkey and bring martial law in effect.

The attempt was prevented by the military loyal to the government along with police units and millions of people in favor of democracy. A total of 264 people, mostly civilians, were killed and over 1,500 people were injured. Opposition parties have united in condemnation of the coup attempt, denouncing it in the harshest terms and underscoring their determination to preserve democracy and rule of law in Turkey.