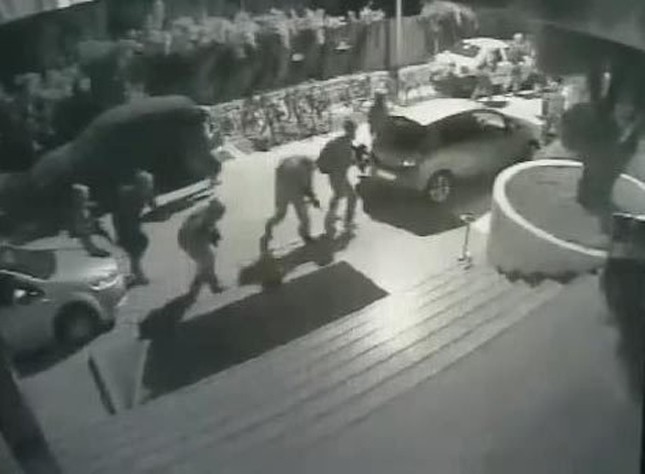 Coup soldiers caught on securtiy camera storming the hotel President Erdou011fan was staying at during the nu0131ght of the failed coup attempt on July 15.
by Daily Sabah Jul 22, 2016 12:00 am

The owner of the hotel in the resort town of Marmaris that President Recep Tayyip Erdoğan was staying at during the night of July 15, Serkan Yazıcı, spoke on Friday about what took place in the last 6 hours of the president's stay during the Gülenists' failed coup attempt.

15 coup officers from the Special Forces Command, 12 soldiers from the Search and Rescue Team, two from Underwater Offence (SAT) commandos went to the resort town of Marmaris and bombed locations the president had been at shortly after he left.

Around 30 soldiers in helicopters descended on the hotel on ropes, shooting in an apparent attempt to seize the president.

At least 246 people, including members of the security forces and civilians, were killed in Istanbul and Ankara and more than 1,530 others wounded as they protested against the coup.

The government has said the attempted coup was organized by followers of U.S.-based preacher Fetullah Gülen, who is accused of a long-running campaign to overthrow the state through supporters within the Turkish institutions, particularly the military, police and judiciary, forming the parallel state.