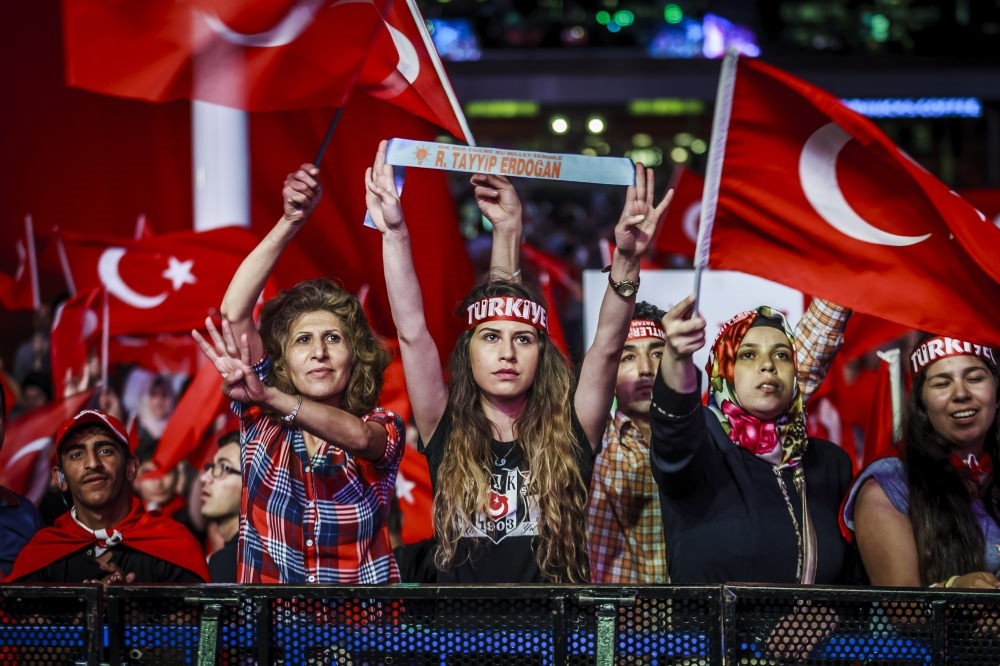 People stood together against coup soldiers on the night of July 15, but women confronting soldiers who were injured or killed in the process left their mark in the history of Turkey's democracy with their heroic stories

In a country proud of female combatants in the War of Independence, it was only natural that women would take center stage in any all-out defense of their country. Their stories of fighting and survival underline how they were instrumental in the fight for democracy in Turkey's male-dominated society.

When tanks rolled through the streets on July 15, people knew a coup attempt was unfolding. Unlike the previous coups when people were scared to confront the juntas, the public, yearning for democracy, rushed to defend it at the cost of their lives, often by simply standing in front of tanks or trying to persuade soldiers to lay down their weapons.

Safiye Bayat, a 34-year-old mother of two, was armed with only a thought, that the soldiers would not kill an unarmed woman, when she fearlessly walked up to soldiers taking over the Bosporus Bridge in Istanbul. The bridge was one of the first places soldiers seized in Istanbul, and coup troops blocked the crossing between the Asian and European sides of the city effectively when they parked tanks and trucks on the busy road. Bayat is the woman in widely circulated security camera footage that shows a woman wearing a headscarf and backpack walk alone up to a legion of soldiers confronting a crowd of anti-coup activists. Bayat is seen arguing with the soldiers who repeatedly try to keep her away. A soldier hits her with the butt of his rifle, and in the end, one of them shoots in her direction. Fortunately, a bullet only grazed her leg.

Safiye Bayat stood up against soldiers on Istanbul's Bosporus Bridge and was injured when soldiers opened fire.

Bayat left home around midnight, a few hours after the coup attempt broke out and people were hearing from the media that coup soldiers were trying to take over strategic locations from the Presidential Palace to Parliament. She joined others heading to the closest location where coup troops were. "The greatest jihad is to stand against the oppressor. This is what Hussein said," she told Anadolu Agency (AA), in reference to Hussein, a grandson of Prophet Muhammad who died in a battle against unjust rule. "I was there to support my brothers and sisters, my nation, my country," she said from the hospital bed while receiving treatment. She walked for nearly one hour to reach the bridge where police officers and civilians gathered to confront the soldiers. Tensions were high and clashes could have erupted at any moment. Police did not allow her when she told them she would try to talk to the commander of the coup troops. She did not listen and started walking anyway. "They could have killed a man, but I thought they would only try to intimidate a woman. That was what I thought when I walked toward them. I spoke to them, but the commander told me to leave. I told him not to do this. 'You are soldiers of this country. Please don't do that,' I told them." 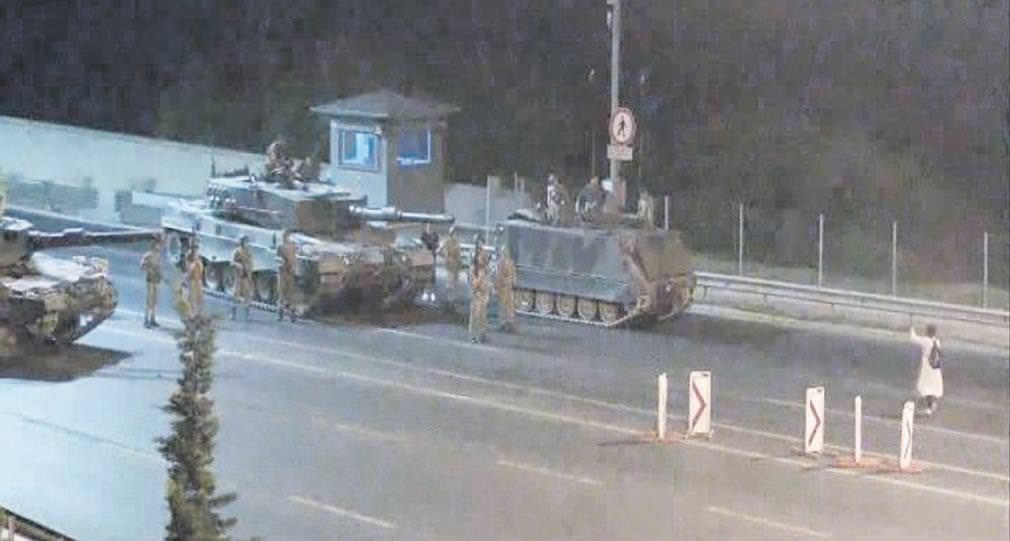 The commander grabbed her arm and moved his rifle near Bayat's cheek. "He then pulled the trigger. I felt my whole face was burning. But I was determined and was not scared. I told them I was not armed and was there only to speak to them. They asked me to leave again. I turned back when I saw they would not budge. Then a clash broke out. They first opened fire into the air, but people were running toward them. Many people were injured there," she recounted. Her thoughts were mixed and she even thought about leaving the bridge before she saw a doctor among the anti-coup activists running to help the injured. "I stayed. I helped them carry the injured, but unfortunately many who were injured there died later at the hospital," Bayat said. Some 246 people were killed and hundreds others injured in confrontations with coup forces that night. Bayat was trying to carry an injured person when a bullet grazed her leg. "It went through my leg. Other people tried to cover me. There wasn't any ambulance. A car took me to the hospital," she said. "God did not take my life. I could be a 'martyr' while helping the injured, but it did not happen. I am fine now, but I am sorry for the people who died there," she said.

Derya Ovacıklı, a teacher, went through a similar struggle in Ankara. A resident of the Kazan district, she joined locals heading to the military base there to prevent the coup attempt. Kazan is home to Akıncı Air Base where military chiefs were held hostage by coup plotters and where fighter jets took off to hit government buildings. She knew something strange was happening when F-16s started flying low. She then saw President Recep Tayyip Erdoğan's call to the public on TV to take to the streets for democracy. "It was about 10 at night. There were soldiers near the base pointing their guns at the crowd. They told us that martial law was declared and they would shoot anyone who came closer," she told AA at the hospital where she is being treated for her injuries. "We then heard aircraft bombing Parliament and ran to the gate of the base. Some people were carrying megaphones and called soldiers to stop the coup. We were there for hours. At about three in the morning a group of gunmen from the base approached the gate. They did not look like soldiers. I heard one of them shout 'fire!' They started firing. One of the attackers shouted: 'Shoot the one with blue shirt.' He was talking about a man next to me. I jumped on the guy to protect him. A bullet hit my leg and I collapsed," she said. Soldiers continued firing on civilians and warned the survivors that they would kill them if they moved. "I moved my head and told one of them that I was injured. He pushed the barrel of his rifle on my leg and pulled the trigger," she said, showing her leg. After the second bullet, she passed out. Ovacıklı was at the hospital when she woke up, and the first thing she asked was if the coup had succeeded. "Thank God, they failed. The Turkish nation showed once again that no power could stop the nation's free will. I am honored if I really contributed to this struggle," she added.

Adviyye Gül İsmailoğlu is among the youngest injured in the coup attempt. The 14-year-old girl, born 22 years after the last major coup in the country, did not think the soldiers would fire on innocent people. İsmailoğlu was among anti-coup protesters who gathered outside Istanbul City Hall with her family. A bullet hit her in the arm, piercing her body, but she did not die. "I was shocked when I saw on TV that a coup was happening. The "reis" [President Erdoğan] called people to take to the streets, and I joined my parents and sister. We were planning to go to the governorate, but we couldn't because of barriers on the streets," she told AA. They walked to the Istanbul municipal building, and soldiers fired into the air to stop the crowd. "But people kept walking despite the fire and our numbers grew. Then they started firing on us. I was thinking they wouldn't shoot us, after all, they were soldiers of our army," she said. "I wouldn't care if they killed me because I would be a martyr [for democracy] anyway," she said.

İsmailoğlu took a bullet in the arm that went through her body before exiting her back. "It was shocking. I thought it was something like a rubber bullet that hit me. I knew it wasn't when I saw the blood," she said.

The teenager said she grew up in a patriotic family, and they would never hesitate to do the same again. "I don't have any regrets. I'm trying to recover as fast as possible so I can go to democracy rallies," İsmailoğlu said. She keeps the Turkish flag she was carrying when she was shot next to her hospital bed. The flag is stained with her blood. Her mother Sevim said that although she is the "more cautious one" in the family, she was caught up with the moment when she saw the "Çanakkale spirit at work," referring to Ottoman soldiers who despite being outnumbered by Allied Forces in World War I in the Battle of Gallipoli in Çanakkale managed to stave off the invading forces. "I was shocked when they fired on us, but it also encouraged us to march. We were there to defend the country. I would go there again if the same thing happened even if my child was killed. After all, we need a country for our children to live in peace and democracy," she told AA.
Last Update: Jul 24, 2016 11:16 pm
RELATED TOPICS