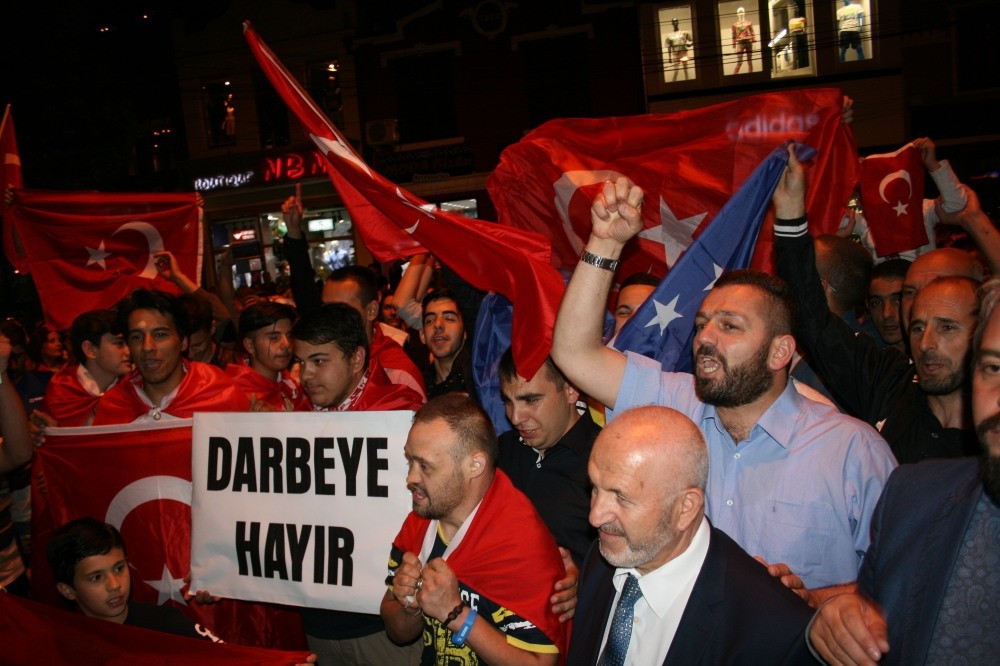 Turks and Albanians in Kosovo stage an anti-coup protest with Turkish flags.
by Daily Sabah with AA Jul 26, 2016 12:00 am
The coup attempt by the Gülenist junta has drawn reactions from heads of state and government, who have decried the attempt. In many countries with close links to Turkey, from Bosnia-Herzegovina to Azerbaijan, people joined Turkish expatriates to rally in support of Turkish democracy and the Turkish public who braved coup troops to foil a Gülenist junta on July 15.

Messages of support from Muslim community leaders have poured in to authorities in the aftermath of the coup attempt while a rally was held in Afghanistan yesterday for Turkey's coup fighters.

Husein Kavazovic, Grand Mufti of Muslims in Bosnia Herzegovina said in his message relayed to Mehmet Görmez, the head of Turkey's state-run religious authority, that the coup attempt night was "a night of challenges." Kavazovic said they were concerned with the developments on the night of the coup attempted and prayed for help to "our Turkish brothers and sisters."

In Afghanistan, people huddled in a conference hall in Maymana, the capital of the Afghan province Faryab to support Turkey.

Speaking at the rally, community leader Maulvi Asadullah Jamali, head of Loya Jirga (Peace Council) for Faryab, said the people of Turkey taught the world a lesson by endorsing democracy against the coup, and condemned the coup attempt.

Other speakers at the rally praised Erdoğan for garnering public support for democracy and said he was an important leader for the Muslim world because of his support for oppressed Muslims across the globe.

Naim Ternava, head of Kosovo's Muslim community, said Turkey have always been supporter and ally of Kosovo and they hoped to see a more stable, stronger and democratic Turkey as he condemned the coup and expressed his support for Turkish leaders. Usama ar-Rifai, head of the Syrian Islamic Council, the religious authority of the Syrian opposition, said Syrians congratulated the government and public for standing against the coup. "May Allah spare Turkey from the evil and plots of the oppressors," ar-Rifai said in his message. Saed al-Lafi, head of the Iraqi Association of Scholars and Imams said in his message that all Arabs and Muslims "could not sleep the night of the coup attempt against the elected leaders of dear Turkey." He extended his congratulations to the Turkish public and their leaders for their success in fighting the coup attempt.
RELATED TOPICS