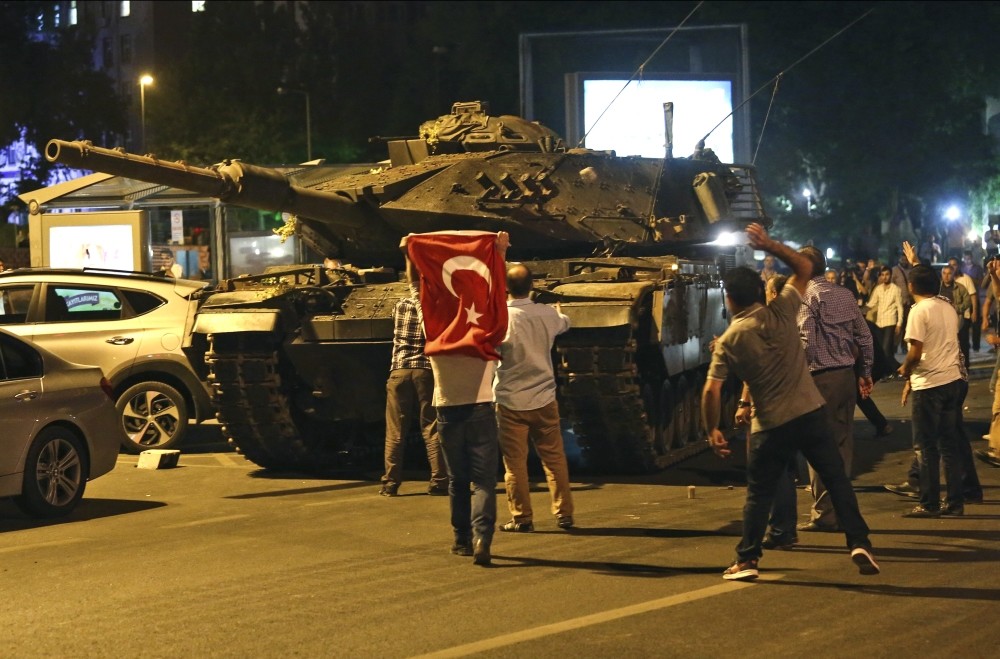 Coup troops killed 246 people, including 161 civilians, but resistance prevailed in the end with people seizing tanks and police capturing soldiers.
by Daily Sabah with AA Jul 29, 2016 12:00 am

The unprecedented resistance of the Turkish public against the Gülenist junta, which attempted to stage a coup on July 15, will be rewarded. Minister of Family and Social Policies Fatma Betül Sayan Kaya said in a televised interview to A Haber TV that the State Medal of Honor will be awarded to families of civilians killed by coup troops and those who survived but were injured.

The medal is part of a wider campaign reported by Turkish media outlets to honor coup victims whose families will be designated as "next of kin of martyrs," a definition allocated for victims of terrorism who are granted monetary compensation and a monthly allowance.

The golden medal is the highest decoration that is awarded to civilians by the state. It was awarded to former Chief of Staff Gen. Necdet Özel last year and is bestowed upon Turkish citizens and foreigners "exhibiting distinguished service, sacrifice, accomplishment for the Republic of Turkey's existence, integrity, peace and unity."

The minister said she visited families of those slain by pro-coup troops and people who survived gunfire while defying the coup attempt and all those who sought recognition for their efforts to resist the junta. "They don't ask for any monetary compensation. They only ask that 'martyrs' be recognized. Survivors told me they would be honored if they were recognized as veterans," she said. "It is our task to bestow medals upon those who acted as human shields to protect the nation's will against the coup attempt," the minister added.

It was the public who stopped the July 15 coup attempt by Gülenists, halting the advance of troops and tanks before police intervened to disrupt the coup attempt. The protestors were unarmed and their resistance was largely peaceful and at times, death-defying, as some lied down in front of tanks in order to force soldiers to stop. They eventually succeeded but some 246 people were killed when pro-coup troops indiscriminately fired upon crowds trying to block their advance to strategic locations such as the Presidential Palace.

The government already launched a charity campaign for victims of the coup attempt and the public is instructed to donate bank accounts for the charity that will be used to address the financial needs of coup victims and families of those killed by the junta. Civilians disabled during the coup attempt will be entitled to disability pay, while families of civilians killed by troops during the resistance will be offered employment and monthly salaries, the Turkish media reported. More than 1,500 people were injured in the incidents.

The coup attempt also inflicted material damages. Several businesses near locations in Ankara and Istanbul where the junta troops opened fire were damaged while dozens of cars were destroyed by tanks rolling on the streets.

Hospitals and nongovernmental organizations (NGOs) around Turkey are also offering psychological support to individuals affected by the failed coup, especially relatives of civilians killed in clashes or those who remain in intensive care at local hospitals. A psychological support unit, set up at the Ankara Numune Training and Research Hospital, helps both patients and their relatives overcome the psychological impact of the events as much as possible through emotional and spiritual support. Around 70 patients are being treated at hospitals, some of whom are receiving intensive care. Professor Nurullah Zengin of the Ankara Numune Training and Research Hospital said that patients' relatives are regularly informed about their loved one's health status. "They need to receive psychological treatment and support, however. The support unit tries to relieve their trauma. This is part of our responsibility," Zengin said.

Yeryüzü Doktorları (Doctors' Worldwide), an NGO that sends medical and humanitarian aid to dozens of countries around the world, also announced its psychological support services following the putsch attempt. People who need to receive emotional support can contact Doctors Worldwide about its service.
Last Update: Jul 29, 2016 1:05 am
RELATED TOPICS