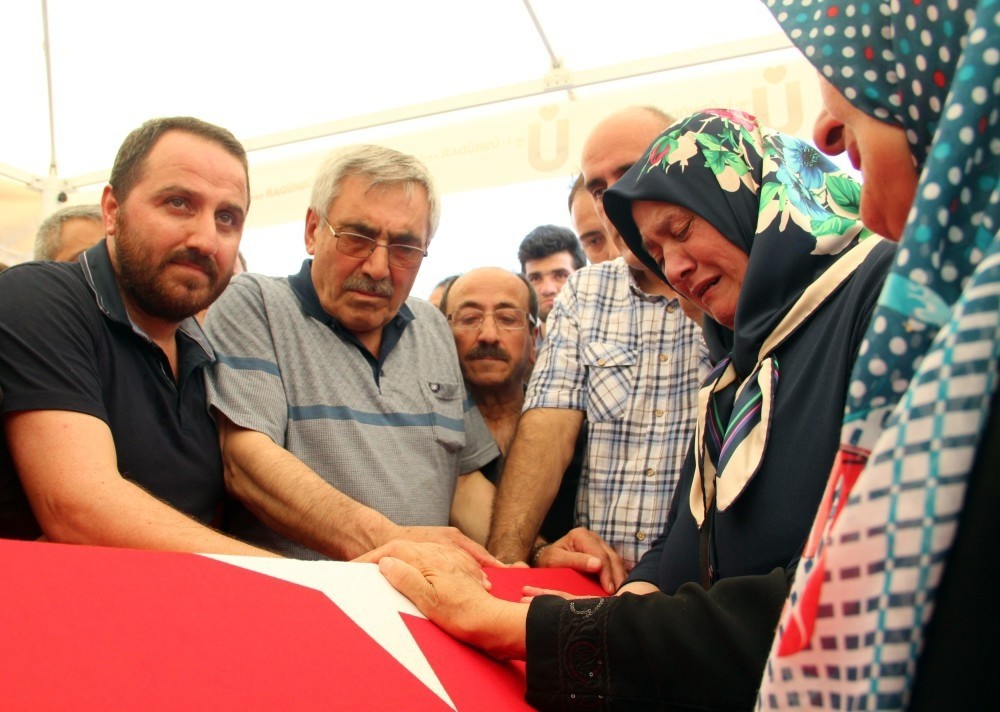 Cengiz Hasbalu2019s family mourn over his flag-draped coffin. (IHA Photo)
by Compiled from Wire Services Aug 06, 2016 12:00 am
Two men killed while confronting coup troops in Ankara and Istanbul were buried on Friday after funeral prayers with ministers and senior officials in attendance. Cengiz Hasbal and Oğuzhan Yaşar were injured when Gülenist junta troops opened fire on unarmed civilians opposing their takeover of public buildings. Both succumbed to their wounds on Thursday. Hasbal, 35, and Yaşar, 23, were among the 237 killed by junta troops and were hailed as heroes for their fatal attempt to stop the troops.

Cengiz Hasbal was on the Bosporus Bridge on the night of July 15 when pro-coup soldiers took over the iconic landmark connecting Istanbul's European and Asian sides, one of the first acts of the coup plotters. He joined a bunch of civilians trying to convince coup plotters to stop the putsch attempt. Soldiers in response opened fire on the crowd who refused to disperse, killing dozens. Hasbal was fighting for his life at an Istanbul hospital for 19 days. "We are happy to be the family of a martyr," his father Ahmet told reporters before the funeral. Energy and Natural Resources Minister Berat Albayrak, former president Abdullah Gül and other dignitaries attended funeral prayers on Friday for Hasbal in the city's Üsküdar district.

Oğuzhan Yaşar joined a crowd of civilian coup opponents when he heard coup troops were trying to take over the Presidential Palace in Ankara. While the group desperately tried to convince troops to stop and blocked the entrance to the compound, gunfire from helicopters mowed down Yaşar and others. He succumbed to his wounds in hospital and became the sixth victim of the attack on the Presidential Palace. His body was sent to his hometown in the eastern city of Erzurum. Health Minister Recep Akdağ was among high-ranking officials attending Yaşar's funeral. President Recep Tayyip Erdoğan rushed to the hospital where Yaşar was in intensive care when he learned of his death on Thursday night. Erdoğan offered his condolences to the young man's family.
RELATED TOPICS