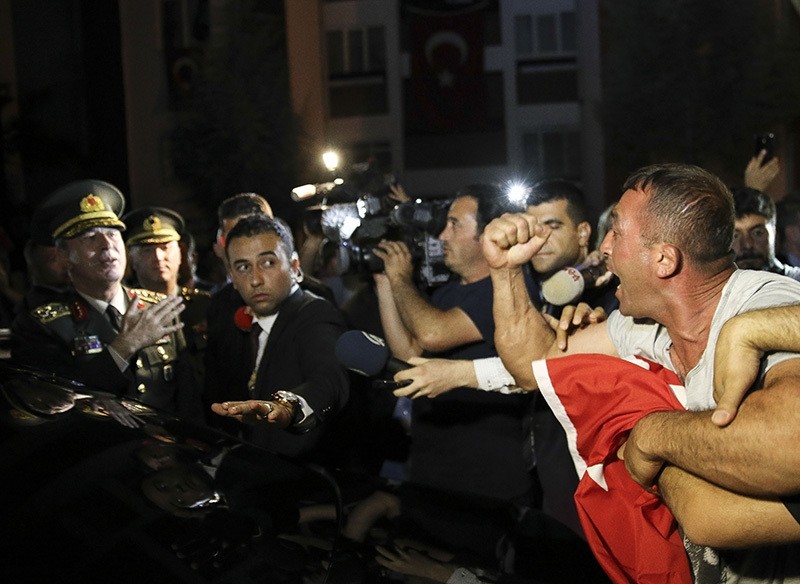 A citizen holding a magazine and a Turkish flag protests Gu00fclenist terror-cult leader Fetullah Gu00fclen as Chief of Staff Akar getting ready to leave in with his car, in Ankara, on August 9. (AA Photo)
by Daily Sabah Aug 09, 2016 12:00 am

Late on Monday, Chief of General Staff Hulusi Akar and force commanders paid a visit in Ankara to the home of the family of Sergeant Ömer Halisdemir, who fought the putschists and died at the Special Forces Command.

A crowd gathered near the home of the Halisdemir family greeting the commanders with applause and slogans.

The visit lasted around half an hour. After the visit, Akar said, "We are sorry for our loss and offer our condolences to our nation."

Aksakallı was not at the headquarters at the time, and managed to escape from the coup troops who sought to kill him. He later recounted how he ordered Halisdemir by phone to shoot Terzi, a senior junta leader who was assigned to take over the headquarters with the coup plotters. "This was my last order to him, and I told him it was a fatal task. He said only 'Yes, sir,'" Aksakallı told Turkish media after the coup attempt was foiled. Halisdemir, hiding behind a tree in the headquarters' courtyard, shot Terzi in the head while the latter was walking towards the entrance. Other coup-participating troops immediately slaughtered the sergeant following Terzi's death, in dramatic moments captured on security camera footage released on Thursday.

The killing of Terzi was a major blow to the putschists and their operation, who intended to bring more special forces to major cities during their attempted coup.