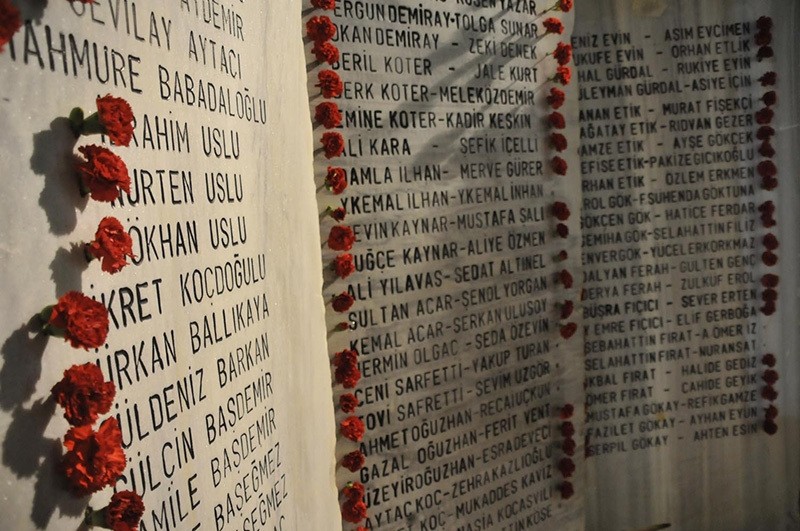 Names of the victims of Aug 17 earthquake are engraved on earthquake memorial in Yalova province. (DHA Photo)
by Daily Sabah with AA Aug 17, 2016 12:00 am

As questions linger for Turkey's preparedness for earthquakes despite all efforts, families and acquaintances of the victims of the deadly Aug. 17, 1999 earthquake commemorated their loved ones for the 16th time in ceremonies held in northwestern provinces. Meanwhile, scientists warn another large earthquake is certain to happen at some point in the future in the same region, although it is difficult to pinpoint exactly when.

Locals in Kocaeli, Sakarya, Yalova and Istanbul provinces gathered at dawn ceremonies to commemorate the some 17,000 victims of the temblor that also dealt a huge blow to the economy and infrastructure. People held prayers for the victims and threw carnations in the sea.

Sixteen years ago, a 7.4-magnitude earthquake rocked northwestern Turkey at 3:02 a.m. on Aug. 17. It was among the deadliest in modern Turkey, leveling thousands of homes in Turkey's industrial heartland and leaving hundreds of thousands of people homeless. Production was disrupted for weeks, main road and rail arteries connecting Istanbul to Ankara were unusable for days, telecommunication system collapsed and a fire broke out in Turkey's largest oil refinery, Tüpraş, which was not extinguished for four days.

In Gölcük, the closest town to the epicenter of the earthquake, 420 soldiers were killed in the barracks and facilities of the Navy's main base.

The 1999 earthquake was a turning point for many. For survivors, it meant lengthy trauma. For the larger public, it was a symbol of anger against the government, which had been slow to respond to one of the country's worst disasters in the past century. The then government officials arrived three days after the earthquake and public services to help the survivors remained ineffective. Roads leading to affected areas had been blocked for days. The Turkish Red Crescent, the country's main state-run aid organization responded poorly, delivering damaged tents that had decayed in warehouses to survivors whereas volunteer search and rescue organizations shone for their rescue efforts.

The earthquake also exposed the absence of measures against such a large-scale disaster. Many buildings were prone to be damaged easily in earthquakes and a lack of supervision and legal regulations for better building inspection in compliance with construction standards were nonexistent.

Experts attribute the large death toll to the weak buildings in a country sitting on multiple active fault lines, particularly those traversing the northwestern and western parts where the population is most heavily concentrated.

Years after the disaster, Turkey has seen an overhaul of measures to prevent damage from earthquakes such as compulsory earthquake insurance and campaigns to raise awareness and inform the public. More importantly, the government undertook the ambitious project of urban transformation. Old, crumbling buildings across the country are being demolished to make way for new, earthquake-proof buildings. Although it is difficult to entirely change the course of urbanization and housing that led to haphazard development especially in big cities decades ago, the country is gradually renewing its infrastructure. According to the Environment and Urban Planning Ministry, there are 42,000 at-risk buildings in the country that are to be "transformed" into contemporary, safe buildings.

Still, scientists have not ruled out "the big one," which is estimated to hit the Marmara region where Kocaeli, Istanbul and other regions affected by the 1999 earthquake are. Professor Haluk Özener, who heads the Kandilli Observatory and Earthquake Research Institute, the leading authority on earthquake projections, says a devastating earthquake remains a possibility and the only thing they do not know was when it will happen. Özener told a press conference yesterday that they estimate there will be an earthquake with a magnitude above 7 on the Richter scale in the future for the Marmara region.

Özener said about 92 percent of Turkey faces the risk of earthquakes and stressed that awareness of earthquakes significantly increased after the 1999 disaster.

"Scientists correctly predicted the location and magnitude of the 1999 earthquake but did not know when it would happen. Now we know to an extent the magnitude and location of the next big earthquake, but there is still no projection for its date. We have many scenarios and scientists invest all their resources and time to find out when and where it will happen. This is all scientists can do and it is now up to the decision makers and the public on how to act in the face of disaster. This is a natural disaster and we cannot prevent it, but we have the opportunity to minimize the damage it might inflict," he said.

He said they maintain an early-warning system in Istanbul that can provide warnings up to 16 seconds before the disaster. "This might seem like too late, but it is vital because automated systems have automatic shutdowns for natural gas flow, shutdown of bridges, tunnels et cetera," he said.