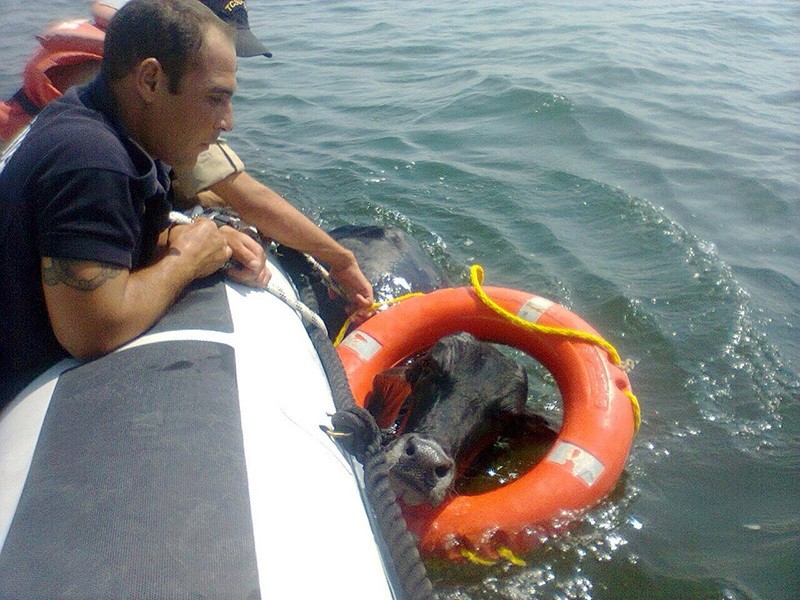 An Angus cattle has been rescued after it fell into the sea from a ship travelling from Singapore to Izmir. Search and rescue teams were immediately informed of the overboard cattle, and were quick to the scene to save it from drowning.

The unusual rescue operation took place in the Gulf of Izmir. Citizens travelling on a ferry from Karşıyaka to Konak were surprised to observe a cow in the sea, rather than the typical fish they might have expected. They immediately called the relevant departments for help, but when underwater teams arrived on their rescue boat in response to the call, they couldn't find the cattle near Alsancak, Karşıyaka or Konak districts. As they were heading back, personnel from a military tanker notified the searchers that the animal had been spotted near Bostanlı neighborhood.

The Angus was found struggling in water 300 meters from the Bostanlı Ferry Port. The underwater team put a robe around the animal's vest and a life vest around its neck, to allow it to rest for a while - the animal was so exhausted that it stayed this way for half an hour. The rescue team then brought it to the coast near the Bostanlı Fishing Port. However it proved quite a challenge to get the animal on land. Despite its exhaustion, the cow released itself of its rope and managed escaped, before being later caught by the team. Veterinarians then took care of the animal before it was brought to the Customs Office in order to be delivered to its owners.

Mesut Aytekin, a rescue diver of 17 years, and Özay Kökten, who were both members of the rescue team, stated that they had rescued cats, dogs and citizens in the sea before but it was the first time they had rescued an Angus cattle.

"It's a miracle the animal survived for that long without drowning. We learned that two other cows escaped from the ship but were caught later. This one probably fell into the sea while the ship was approaching the coast. We are pleased that out rescue mission had a happy ending."
Last Update: Aug 27, 2016 12:23 am
RELATED TOPICS