Turkey to provide Jarablus with electricity, water before Eid 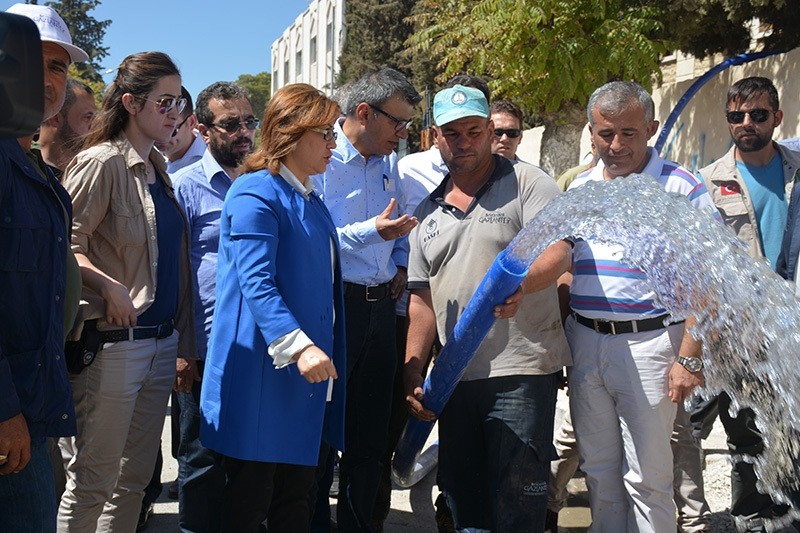 Gaziantep Mayor Fatma u015eahin (C) was briefed on the latest developments of reconstruction efforts in Jarablus. (AA Photo)
by Daily Sabah Sep 08, 2016 12:00 am

Following the clearance of Daesh from its borders and the securing of the northern Syrian town of Jarablus, in collaboration with the Free Syrian Army, Turkey is getting ready to provide the town with electricity and water before the Qurban Bayram (Feast of the Sacrifice), also known as Eid al-Adha.

"We will provide electricity to Jarablus this bayram, god willing," Energy and Natural Resources Minister Berat Albayrak said in a tweet on Thursday, noting that the town was now cleared of terrorists and the aim is to return life back to normal.

Last week, a local electricity distribution company launched efforts to link the grid in Jarablus with the Turkish border town of Karkamış. A three-kilometer underground power line from Karkamış will connect to Jarablus, with two kilometers located in Syrian soil and the remainder in Turkey.

"Having kicked Daesh out of Jarablus, our next goal is to help bring life back to normal in the area. With hundreds of Syrian refugees returning to recently-liberated areas across the Turkish-Syrian border, supplying electricity to Jarablus is a crucial step to accomplish that task," an official from the Ministry of Energy said.

Meanwhile, a delegation from the Gaziantep Metropolitan Municipality visited Jarablus to oversee reconstruction efforts and show solidarity with the locals.

Şahin said that there were ongoing efforts by the Gaziantep Municipality and other institutions to rebuild Jarablus, coordinated by the governorate. She said that technical units are trying to divert water from the city's wells to the water network with the help of power generators, hoping that the town will have water before bayram.

Şahin added that eight units equipped with heavy machinery are trying to clear rubble and trash from the city before bayram.