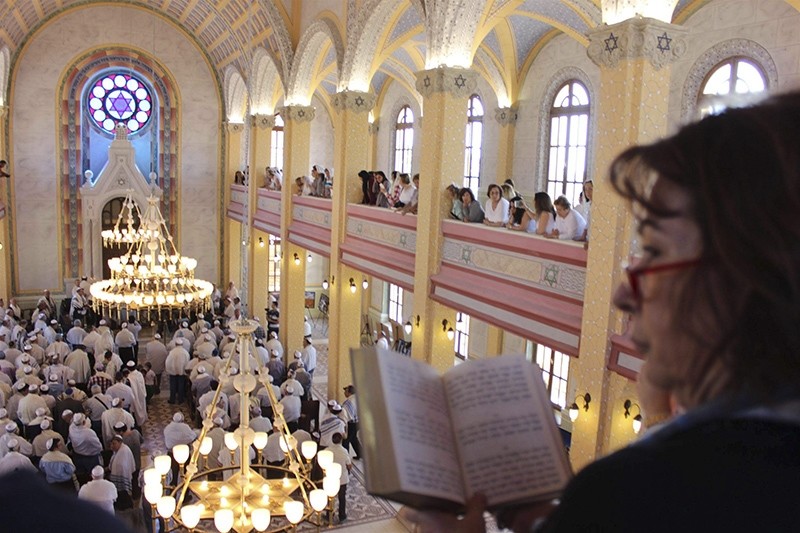 This year's Rosh Hashanah also coincides with Muslims' new hijri year, although the celebration of Rosh Hashanah, which literally means head of the year, started on Sunday evening.

The community's traditions for celebrating the New Year, 5777 according to the Jewish calendar, include traditional family dinners where symbolic foods and fruits such as pomegranate and challah bread are served as well as apples dipped in honey. The New Year's onset is also marked with blowing the shofar, a hollowed-out ram's horn. For two days, Jewish community members observed traditional rituals and prayers in synagogues and their homes, as no work is permitted, like the weekly Sabbath. The Jewish New Year observation concludes on Yom Kippur or Day of Atonement, which takes place eight days after Rosh Hashanah.

President Recep Tayyip Erdoğan issued a message to celebrate Rosh Hashanah for the country's Jewish community, which is mainly concentrated in Istanbul. Erdoğan said Rosh Hashanah was one of the most important religious holidays of the Jewish faith. "As representatives of a tradition seeing social, cultural and political diversity as a wealth, we attach importance to the coexistence of our citizens without discrimination based on their faith, religion, race and ethnicity and in peace. We believe it is one of the basic rights for all our citizens to observe their religious and cultural practices. This mindset we preserved for centuries and are determined to preserve for future generations is an insurance for our unity. I wish peace and health for all Jewish citizens on the occasion of Rosh Hashanah," he said in a written message to the community.

Turkey's Jewish population stands at 20,000, according to unconfirmed figures. Most are descendants of Sephardic Jews expelled from Spain during the Spanish Inquisition who settled in the Ottoman Empire.