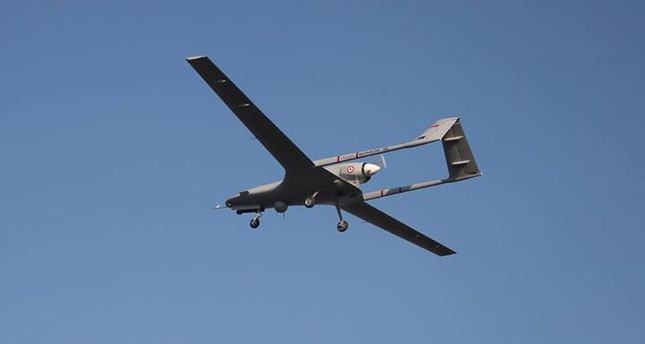 Bayraktar
by Daily Sabah Oct 04, 2016 12:00 am
A Turkish company is developing a telecommunications system specifically designed for domestically produced unmanned aerial vehicles that will expand their line of sight.

The Line of Sight Terminal that will be integrated into locally made drones such as Bayraktar and ANKA will enable the control of aerial vehicles for up to 150 kilometers, according to a report in Yeni Şafak daily.

Line of Sight will provide drones with a wider span of access which is crucial in the contect of the ongoing crossborder operations in Syria. The system is currently undergoing field tests.

SATCOM, specifically designed for ANKA-S drones, enables the use of unmanned aerial vehicles at any point across the globe with unlimited command and control abilities.

The Line of Sight system allows one terminal to control drone communications within a 150-kilometer radius and the company has plans to widen the capability to 200 kilometers in the future.

The system is an example of Turkey's campaign for national and domestic defense systems in recent years, aimed to curb dependence on foreign production and strengthen Turkey's defense sector.

The Bayraktar TB2 drone, manufactured by the pioneering Baykar company, is a locally produced, unmanned aerial vehicle considered a key component of modern warfare and reconnaissance missions. The domestic drone which has been used for surveillance purposes by the Turkish military since 2014, has proven its validity in military operations where it successfully located targets in recent counterterrorism operations in southeastern Turkey against the PKK terror organization.

President Recep Tayyip Erdoğan and the Justice and Development Party (AK Party) government champion a "national and domestic" initiative for the defense industry. Speaking at a science and technology event yesterday, President Erdoğan said that Turkey was not capable of "even producing a simple rifle" in the past and now has the capacity to develop its own warships. "We also have armed drones now. This is an accomplishment. We used to purchase [defense products] from the U.S. In the past, we faced obstruction by the U.S. Congress in the acquisition of drones from the U.S. repeatedly, even though Turkey is a strategic ally of the U.S. The last time we purchased drones, they were from Israel and we faced problems in their reparation here in case of malfunction," he noted.
RELATED TOPICS