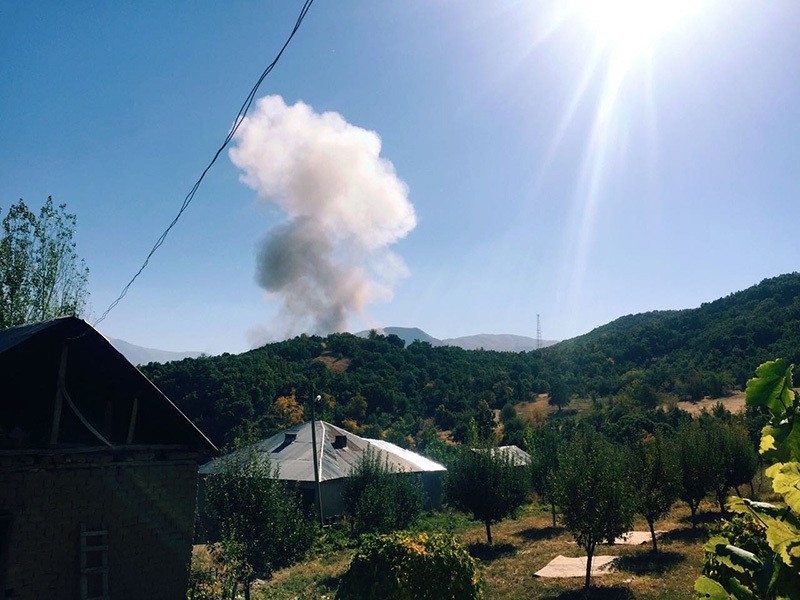 PKK terrorists killed 15 people and injured 27, in a bomb-laden vehicle attack on a gendarmerie checkpoint in the Şemdinli district of Turkey's southeastern Hakkari province yesterday.

The death toll was announced as 18 on the day of the attack, but was later updated as 15 - 10 soldiers, 5 civilians - the following day.

Prime Minister Binali Yıldırım said that the PKK terrorists used 5 tons of explosives in the attack. The explosion occurred during an identification check in front of the Durak gendarmerie station.

The blast initially killed six soldiers and wounded seven others, but some of the injured, including the civilians waiting at the checkpont, later succumbed to their wounds. Military sources said that although the checkpoint was targeted in the attack, the huge blast also affected the entrance of the station.

The gendarmerie station is located 20 kilometers away from the district center of Şemdinli. Military sources stated that the blast caused a pit measuring 10-to-15 meters in width and 6-to-7 meters in depth to form on the road.

President Recep Tayyip Erdoğan issued a statement condemning the attack, where he said the government is determined to disable the PKK terror group from carrying out further attacks.

"Our state, with all of its institutions and hand-in-hand with the people, will disable the terror group from carrying out any attacks," the president said.

"The terror group, after the launch of its attacks last year, has been pushed into isolation and exclusion by the people in the [eastern and southeastern] region.

As such, the members of the group, just like FETÖ and Daish, have been directed toward proving their existence through taking lives and shedding blood," he added.

The bombing comes a day after two suspects believed to have been preparing a car bomb attack blew themselves up in the outskirts of Ankara when police ordered them to surrender.

The government has ruled out reviving peace negotiations, with Deputy Prime Minister Numan Kurtulmuş tweeting Sunday: "Turkey will never capitulate to terrorist organizations." He said the perpetrators of Sunday's "abominable" attack would be called to account.

An air-backed operation was launched in the area after the attack. Şemdinli is a mountainous area near the border with Iraq and Iran in the province of Hakkari, where PKK terrorists are active and a large number of PKK terror attacks have been reported since the group resumed its armed campaign in July last year.