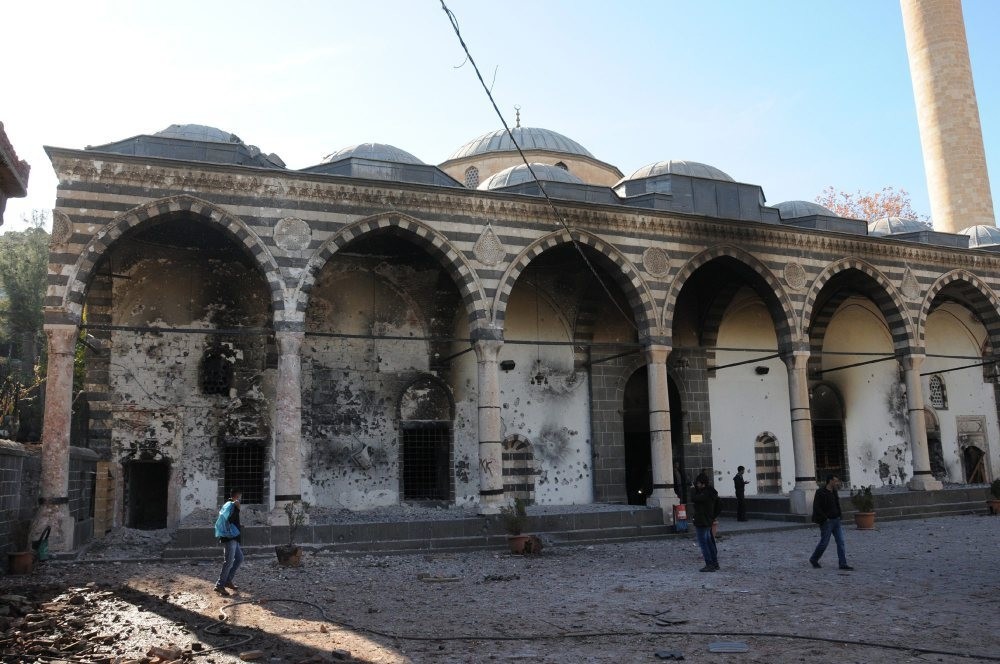 Fatih Pau015fa Mosque, also known as Kuru015funlu mosque for its lead-covered dome, is among the places of worship damaged in the PKK attacks.
by Hasan Ay Oct 13, 2016 12:00 am

Turkey's predominantly-Kurdish southeast now bears the scars of PKK attacks waged under the auspices of a campaign for "Kurdish self-rule" which resulted in bombings, clashes with security forces and destruction of entire neighborhoods in Diyarbakır last year.

As the Turkish government continues to provide financial compensation to the victims of PKK terror, Ankara now aims to restore heavily-damaged historical sites in the region, including mosques and churches.

The Diyarbakır province is at the heart of the government's restoration campaign which is being run by the Directorate General of Foundations. Locals living in many neighborhoods in the province have struggled to recover from the attacks since the PKK resumed their armed campaign in June 2015 following a brief cessation of hostilities. Many of the city's buildings are still riddled with bullet holes months after these intense clashes.

The restoration project includes the Fatih Paşa Mosque, also known as the Kurşunlu mosque, which was the first Ottoman-era religious building to be erected in Diyarbakır in the 16th century. The mosque's original doors and windows were burned in the attacks and its interior was seriously damaged. The state-run agency will also rebuild the pastor's lodge and the bell tower of the Armenian Catholic Church in the historic Suriçi district of Diyarbakır. The church, believed to have been rebuilt during the 18th century at the site of an older church, is one of the finest decorated churches in the region and also one of the most heavily damaged in the city. The government has launched an expropriation project in parallel with the restoration of historic sites as part of their recovery efforts. Rebuilding the church will include the reconstruction of the residential area of a temple owned by the Directorate General of Foundations. The church in Diyarbakır, still standing years after the Catholic-Armenian population migrated to other cities, was formerly used as a weaving workshop after undergoing initial restorations in 2013. Authorities expect reconstruction and restoration efforts there to be completed by 2018.

Officials have launched a similar project for reconstruction and restoration, including bidding, on construction at the site of the Diyarbakır Ulu Mosque, the Şeyh Mutahhar Mosque, the historic minarets of a historic mosque which is no longer standing and a Protestant Church.

President of the Directorate General of Foundations Adnan Ertem said once these buildings are restored they will not simply be left to their fate pledging that, "We have sped up the process in our work to preserve the historic legacy [of Diyarbakır]. We strive to keep these places as near to their original state as possible throughout the entire process."

It is not exactly known how many churches and mosques in Turkey's southeast were damaged at the hands of the PKK, which has not stopped its armed campaign against the Turkish state, but figures released in March revealed the terrorist group has torched at least 89 mosques there.

The government has earmarked a budget of TL 50 million ($17.26 million) to restore 13 historic buildings in southeastern Turkey that were damaged in the attacks.

Hundreds of officers and civilians have been killed in PKK attacks in Diyarbakır and other cities in the region.

Parts of Diyarbakır's Sur district are listed as UNESCO World Heritage sites and the government has pledged to restore those sites to their former state as well, reinvigorating the slow economy in the region that has struggled to grow since the PKK began its campaign back in the 1980s. Although the terrorist group largely ceased its blockade of neighborhoods in the city in the past months, it still maintains a presence and occasionally targets civilians, police and troops.
RELATED TOPICS