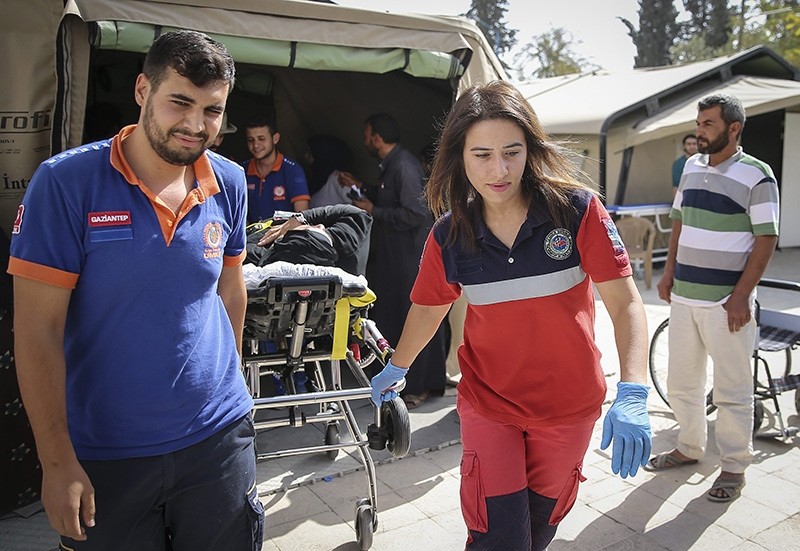 A Turkish emergency medical technician (EMT) known locally as the "first aid angel" of Jarablus, Syria races daily against time to save lives, braving the horrors of war to help Syrians in medical need.

For two weeks Sibel Öztürk, 30, has been working in Jarablus. Though this northern Syrian city was recently rid of the Daesh terrorist group by Turkey's Operation Euphrates Shield, clashes continue in surrounding areas, and the wounded are brought to Jarablus for treatment.

Öztürk, who also volunteers on the Turkish National Medical Rescue Team, spends most of her time at the hospital and on the road. Öztürk pushes the speed limit to rush injured people to a hospital in Jarablus set up with Turkey's support.

Öztürk told Anadolu Agency that before Jarablus, she worked at an emergency call center in the southeastern Gaziantep province. At first, Öztürk said, she was anxious about her work, but added, "Now I've gotten used to living in this area and do my job with love."

"When I first got here and set foot on the streets of Jarablus, I was worried. But now I can easily drive an ambulance and do my job."

The work is hard, said Öztürk. "Our mission is to save lives, and so we work deliberately to do our job whatever the conditions."

Öztürk said she sees difficult sights every day. "It was difficult for me in the beginning to see dismembered arms and legs, the tears of children who lost their fathers, but we shouldn't let our emotions get in the way of doing our jobs."

"I can also drive an ambulance if needed, as I have advanced driving skills training. Our jobs skills help us control our feelings and work quickly," said Öztürk, adding that although she is working in a war-torn region, she feels safe.