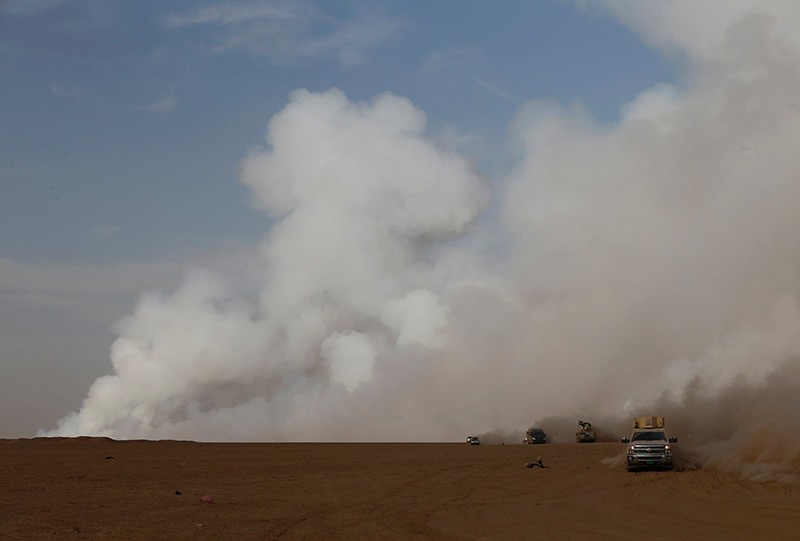 Smoke rises from a sulfur factory after Daesh terrorists set fire to it releasing toxic smoke over the area at south of Mosul, Iraq, October 21, 2016. (Reuters Photo)
by Daily Sabah Oct 26, 2016 12:00 am

The clouds of toxic sulfur dioxide which occurred after Daesh terrorists torched a sulfur plant south of Iraqi city of Mosul will soon arrive in Turkey and is expected to fall to the ground in the form of acid rain.

Daesh terrorists set massive sulfur deposits on fire when retreating from the Al-Mishraq sulfur plant located some 40 kilometers south of Mosul. The toxic smoke has already caused hundreds to seek medical help in one of Iraq's most populated regions due to breathing difficulties and nosebleeds up to 30 kilometers (18 miles) away. 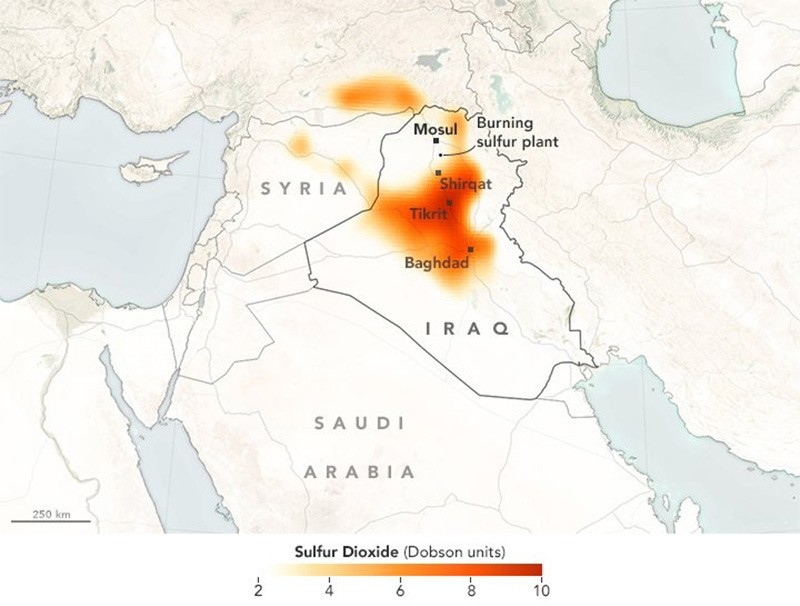 According to an image released by the National Aeronautics and Space Administration (NASA), the smoke of sulfur dioxide has already reached Turkey's southeastern parts, while covering much of Iraq's central parts, including large cities like Baghdad, Tikrit, Kirkuk and Mosul.

Gökhan Abur, the meteorology editor of Turkish broadcaster NTV, explained Wednesday that starting from Thursday evening, the winds will blow from the southeast and bring the toxic smoke along with rainclouds. "The rain will increase humidity in the area. Humidity is water vapor. When H2O merges with SO2 and water vapor, it will form H2SO4, the acid known as sulfuric acid. As the smoke gets closer to us, it will be completely inside our border on Friday and Saturday, when the downpours will be effective," Abur said.

"These raindrops will be loaded with acid. As NASA had stated, the most dangerous thing for us is that these acid rains will burn the plants in the region. Therefore it will both burn the plants on ground level and harm trees," he added.

Abur noted that a theory assumes that these toxic clouds loaded with SO2 would remain in the air for seven days, and a large part of clouds will enter this chemical reaction.

He added that as of Friday night, rain will only be effective in Şırnak and Mardin provinces, however, as of Saturday, strong downpours will affect the whole southeast. 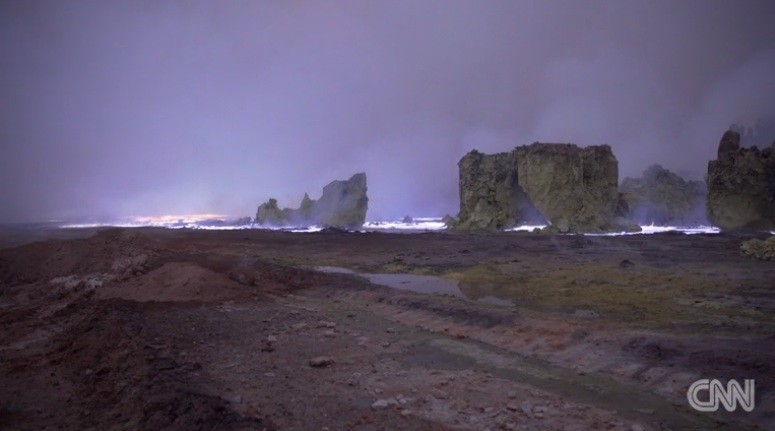 Speaking to Turkish broadcaster A Haber, Prof. Mikdat Kadıoğlu from the Istanbul Technical University (ITU) meteorology department said that these clouds do not arrive in very concentrated forms, and the rain will fall down in the form of sulfuric acid. "This type of rain can occur all the time. After all, this is an acid rain. It can cause damage to plants, metal objects and historical artifacts. If they rain on lakes, they would increase their acidity," Kadıoğlu said.

Professor Kadıoğlu said that these rains also cause breathing problems, and people should avoid sports and outdoor activities.