Istanbul event seeks to teach lessons on coup and resistance 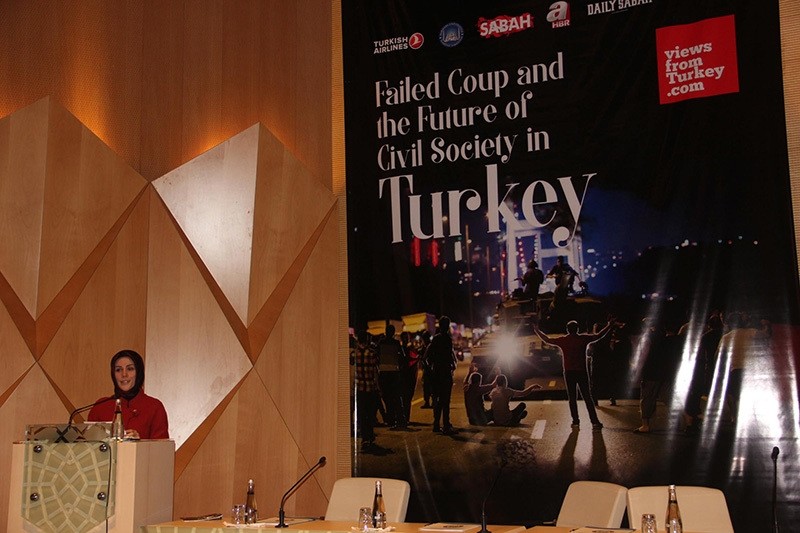 A two-day event titled "Failed Coup and the Future of Civil Society in Turkey" opened yesterday in Istanbul. Hosted by Marmara University's Faculty of Theology, the event seeks to analyze the foiled putsch attempt on July 15 by a small junta loyal to the Gülenist Terror Group (FETÖ) and offers views on how to prevent similar coups in other countries.

Representatives of over 60 nongovernmental organizations from Turkey and other countries will attend the event, which will also host an exhibition about the coup night and screenings of short films about the putsch foiled by strong public resistance. Turkish academics, journalists, lawmakers, intellectuals and political analysts will join foreign guests including prominent Malaysian intellectual Syed Farid Alatas, Iranian academic Seyed Javad Miri and Palestinian academic Abd al-Fettah al-Awaisi. 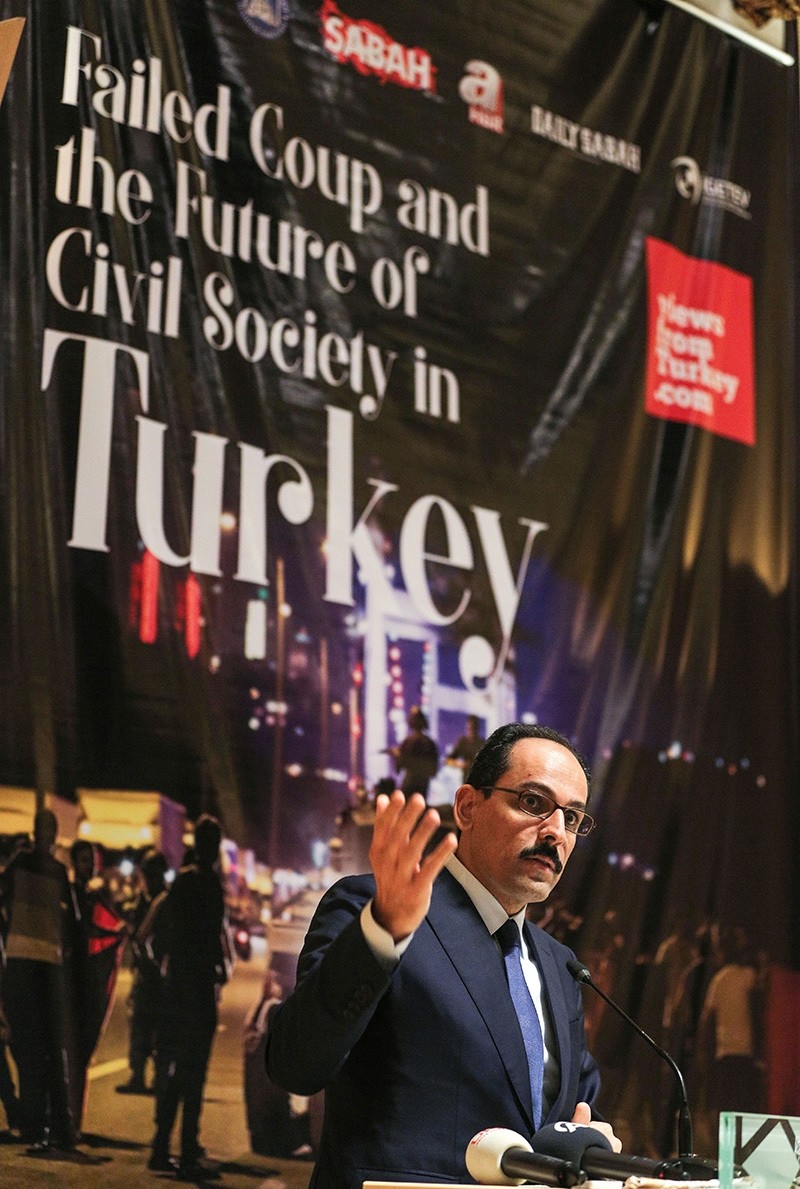 In a keynote speech on the first day of the event, presidential spokesman Ibrahim Kalın said it was important to see "the big picture" about the coup night and said it cannot be downplayed as the work of a small group. Kalın said those who stood against the coup plotters had nothing in their hands. "It is rare to witness such reaction in the name of freedom and democracy and indeed, it shows the might of Turkish civic society," Kalın said in reference to the public struggle against pro-coup troops that resulted in the deaths of hundreds by the gunfire of putschist troops. He said people had no "personal experience" to fight against a coup attempt. "They Googled how to stop a tank. They discovered you can stop a tank if you clog its exhaust pipe. They improvised their way to stop them. It was a sign of bravery for the part of the public, something that made us proud," he said.

He said FETÖ being behind the coup attempt initially emerged as followers of a Muslim scholar, Said Nursi and then adopted a "Messianic" mindset, believing Fetullah Gülen, leader of FETÖ, had "a special mission." "It is worth questioning why any religious group claiming to promote peace and interfaith dialogue would seek clout in bureaucracy, judiciary, and military and try to install its members into state institutions such as intelligence services. They waited to deal 'a final blow' after drafting plots (to seize power) for decades," Kalın said, noting that killing hundreds and bombing the parliament was the result of a bizarre belief. "Their attempts to promote themselves as peaceful turned out to be a lie in the end," he said. 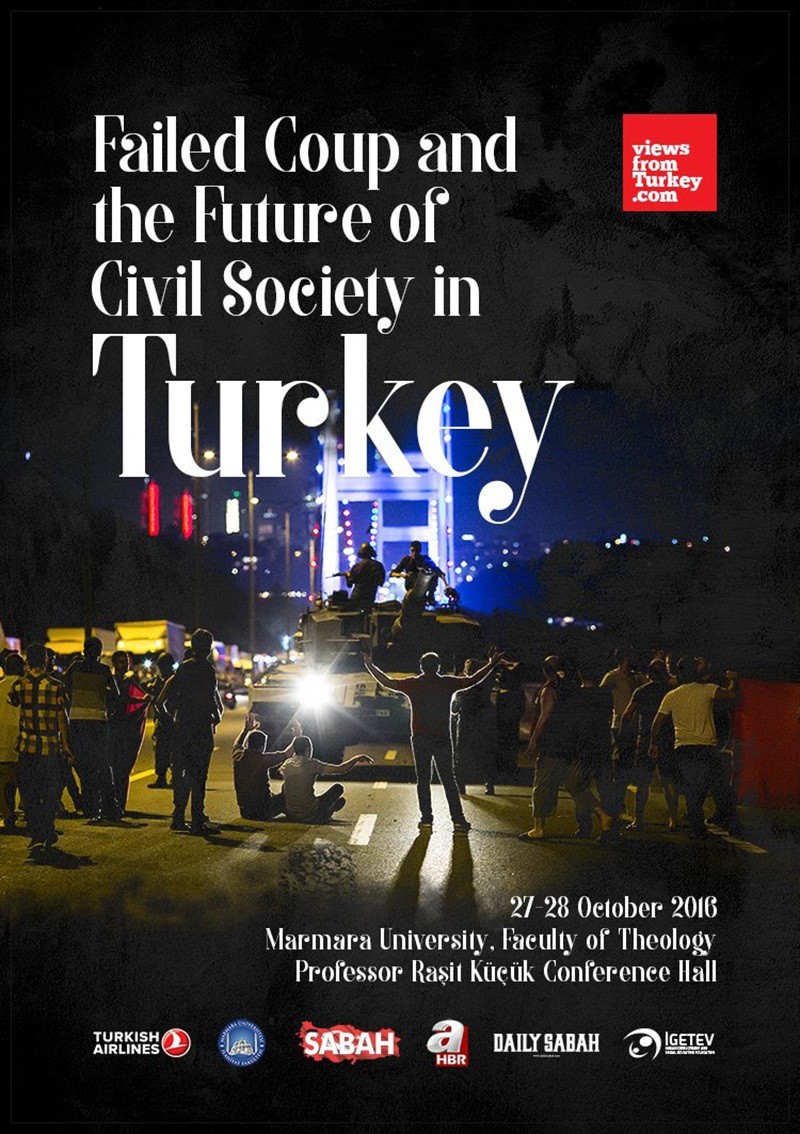 Kalın said Turkey was "a strong country" and such a coup attempt in another country would polarize the society.

The presidential spokesman also complained of the Western media's coverage of the coup attempt, especially in terms of women standing against the coup attempt. "Western media is known for wide coverage of female terrorists of the PKK and YPG [People's Protection Units] and portray them as freedom fighters. Whereas, they are not very interested in women who took to the streets against the coup plotters in July," Kalın said, in reference to two interconnected terrorist groups. "This is because the women on the streets that night did not fit their description of Turkish women. They did not think women in Turkey or any other Muslim country would defend democracy," he stated.

Kalın said Turkey did not combat only with FETÖ but also other terrorist groups from the PKK, YPG, Daesh and the Revolutionary People's Liberation Party-Front (DHKP-C) and was surrounded by countries struggling with problems such as Syria and Iraq. "Despite all these, if you have a strong public, a strong civic society and a strong leadership, you can overcome all of your problems," he said.

Addressing the event, Dr. Esra Albayrak, daughter of President Recep Tayyip Erdoğan, stating that Turkey has faced coup attempts in the past and been under the threat of terrorist groups said, "But the largest attack was by FETÖ on the night of the coup." Recalling the coup night on which she, her family and father were at a vacation resort in the southwest of Turkey, Albayrak said they were afraid due to the uncertainty of the situation. "However, my father looked determined. He believed he could defeat the coup with the help of the nation. He had complete faith in the people. They offered him a flight to Greece but he declined the offer. He was never desperate although he knew [coup troops] bombed the Parliament," she said.

Albayrak praised the public standing "unarmed" against fighter jets and tanks for "accomplishing the impossible." "We have 241 martyrs and more than 2,000 injured but we did it. I wonder how people in other countries, in Europe, in the United States, would act in the face of such a coup," she stated.

Albayrak also touched on FETÖ's being behind the coup attempt. "This group sought to inflict the heaviest damage to our democracy but they failed. They are responsible for the bloodshed during the coup attempt but international organizations fail to see it," she added.

The event's organizers say they aim for an analysis of causes, actors and consequences of the coup attempt and conveying Turkey's experience to representatives of civic society, academics and opinion leaders in order to prevent other attempts against democracy. They also seek to raise awareness on what Turkey went through on that fateful night on July 15 by focusing on the stories of "heroes" standing unarmed against pro-coup troops and correcting misconceptions about the coup attempt abroad.