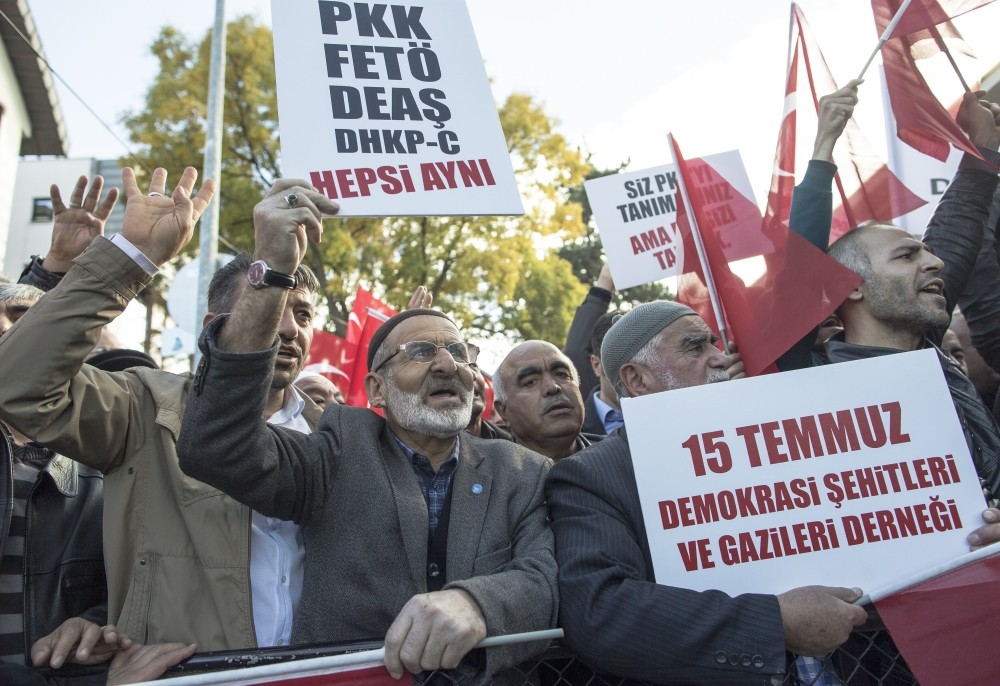 by Daily Sabah Nov 12, 2016 12:00 am
France was the most recent target of an angry crowd of terror victims and "village guards" - a civilian anti-terror force sponsored by the state - who denounced the European country's siding with lawmakers from the Peoples' Democratic Party (HDP) known for its links to the PKK terrorist group.

The group of veterans and families of those killed in terror attacks convened outside the French embassy in Ankara yesterday to protest the European country's "stance against Turkey and support for terrorism."

France was among the countries that criticized the arrest of the leaders of the HDP, who defied a court order to give testimony in terror-related cases, a charge that carries an arrest warrant. It is also criticized for allowing rallies by supporters of the PKK in Paris while hosting of a group of militants from a Syrian affiliate of the PKK by French President François Hollande last year has drawn the ire of Turkey. The HDP, known for intricate ties with the PKK, which has been responsible for hundreds of attacks against civilians and security forces for three decades, portrays the terrorist group's campaign as an armed struggle, earning sympathy from EU countries that condemn Turkey for what they view as a "crackdown" on human rights in the arrests of pro-PKK figures.

Speaking on behalf of the demonstrators, Ziya Sözen said France, their next stop in protests after similar rallies outside the German and Belgian embassies earlier this week, like Turkey, suffered from a series of terror attacks and they would support France's struggle against terrorism. "We expect the same from France when it comes to terror attacks targeting Turkey," he said. "Instead, France chose to support terrorists and like other European countries, exhibited hypocrisy," he added, referring to the designation of the PKK as a terrorist group by European Union member states.

"You call the PKK innocent but just the other day, they killed a district governor. You don't dare to raise your voice and you have blood on your hands because you protect the terrorists," Sözen said, referring to an attack in the southeastern province of Mardin blamed on the terrorist group. "You are a partner in crime if you protect terrorists," Sözen stated before he and others left a black wreath at the entrance of the embassy.
RELATED TOPICS