No news from trapped miners 5 days after disaster 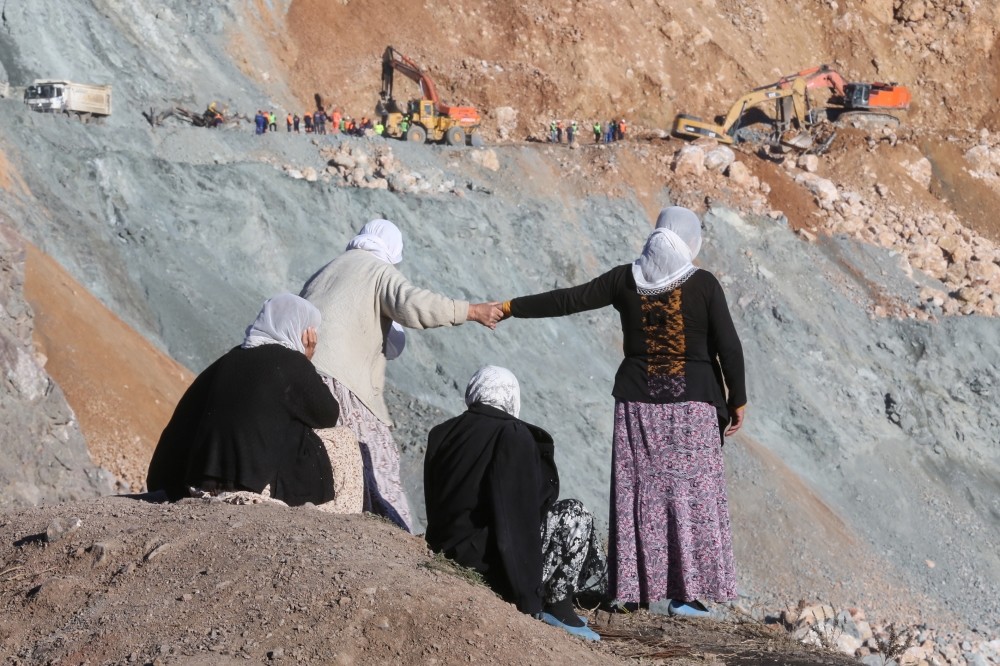 Families watch in anxiety as excavators dig the soil amassed on top of mine's entrance.
by Compiled from Wire Services Nov 22, 2016 12:00 am

On the fifth day of Turkey's latest mine disaster, chances are grim on the fate of ten workers trapped under a massive pile of soil. A resigned look on their faces, brothers, fathers

On the fifth day of Turkey's latest mining disaster, chances are looking grim for the ten workers still trapped under a massive pile of soil.

A resigned look on the faces of the miners' families is evident as they sit restlessly on plastic chairs on the brink of a large pit where a copper mine once stood, awaiting good news. On Thursday, tons of soil buried sixteen workers in the open-pit mine in Şirvan, a town in the eastern province of Siirt, following a landslide. Six bodies were recovered from the site.

Search and rescue crews comb the vast expanse of soil diligently with what one minister called "state-of-the-art technology and equipment" to detect a trace of vital signs from workers. Those in the know of the mine's operations, including workers who were not at the site at the time of the incident, are directing the crews to possible locations where the workers might have been trapped. Then, excavators take over and slowly scrap the surface for any signs of life.

By now, survival is a long shot for the families. Since he learned about the incident late Thursday, Ramazan Beyazalma has been waiting for the recovery of Nusret, his cousin, who was trapped underneath the rubble with his co-workers.

"We have no more hope and now wait only to take the corpses," he told reporters.

Nusret, a 48-year-old father of five, hails from the nearby city of Van. He left for work in the copper mine owned by private-run Park Elektrik. His relatives did not bring the children, the eldest at the age of 12, to the site where wailing of women accompany the rumble of bulldozers.

"What hope can we have about him? He is under a mountain," Beyazalma says, pointing out to the pit filled with soil.

Hayrettin Carık could have been among trapped miners if he did not leave the site minutes before the incident. Carık, a truck driver, had just left the site when a landslide occurred.

"We had a dinner with the others just two hours before it happened. We drank tea, made jokes, everyone was having fun. Then, I hopped into the truck to empty the soil we extracted in a nearby spot. Three other drivers were accompanying me. Just as we left the place, we felt that the ground was shaking," he told reporters at the site of the disaster. Overcoming "an intense fear," Carık and others ran back to the site.

"But we could not see anyone because it was pitch dark. We wouldn't be able to do anything anyway, they were buried hundreds of meters beneath," he said.

Since then, he did not leave the site where his friends and cousins have been buried by the tragic landslide.

Since then, he did not leave the site where his cousins are buried.

Yesterday, Health Minister Recep Akdağ visited the site and met with the families of the trapped miners. He was the latest high-ranking official to visit the mine and inspect rescue efforts after Energy and Natural Resources Minister Berat Albayrak spent last weekend with miners' families there.Speaking to reporters, Akdağ said search and rescue teams were doing "all they can" as efforts focused on the spots where workers were believed to be at the time of the incident rather than make a general scan of the area. He said they deployed 12 excavators, two bulldozers and 25 trucks to comb the area and remove the soil. "We are trying to reach our brothers there while being careful about the safety of the rescue crews," Akdağ said. He added that the government was closely monitoring the situation on the ground.The minister said they had teams of professionals "with true spirit" who have worked ceaselessly to remove "the burden of soil on the site," though he acknowledged the difficulty of deploying more teams to the area due to the rough terrain.
RELATED TOPICS