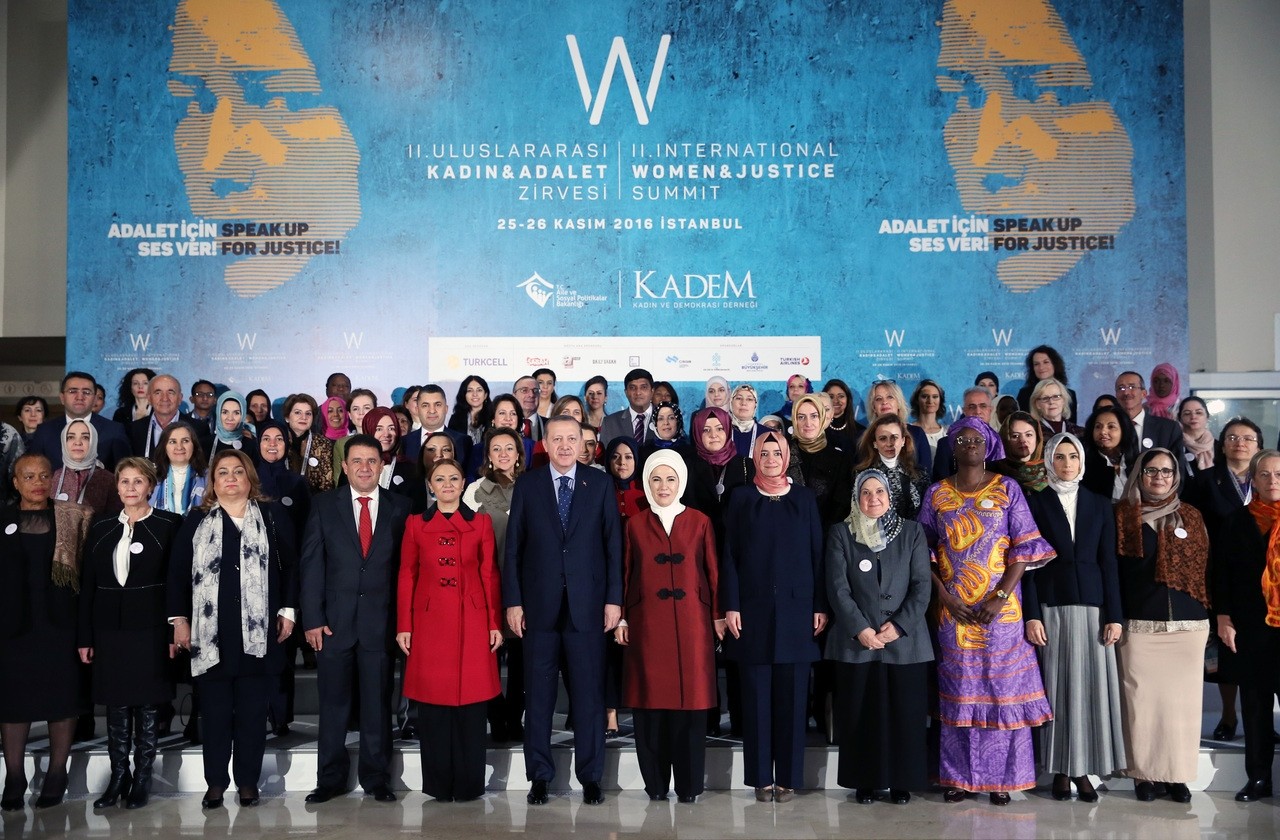 Erdou011fan and participants pose for a group photo during Fridayu2019s opening ceremony for the summit.
by daily sabah Nov 26, 2016 12:00 am
The 2nd International Women and Justice Summit held by the Turkish nongovernmental organization, Women and Democracy Association (KADEM), began in Istanbul on Friday, the start of a two-day event which focuses on the plight of female Syrian refugees and gives a platform to women's issues. Academics and activists specializing in women's issues have come together in Istanbul for the summit, which is hosted by KADEM and focuses on the challenges faced by women in their day-to-day lives, ranging from the gender gap issue to the portrayal of women in the media.

This year's summit will also focus on the challenges faced by female Syrian refugees, who make up a large portion of the refugees who have fled to foreign countries since the Syrian war began five years ago, displacing millions of people.

Turkish President Recep Tayyip Erdoğan and the U.N. Women's Regional Director for Europe and Central Asia and Representative to Turkey Ingibjörg Solrun Gisladottir are among the dignitaries attending the summit, along with ministers from several different countries.The first session of the summit, titled "Women in Peace Processes," will examine the opportunities available to women who seek to play a prominent role in the eradication of conflicts around the world; namely, violence which has a much more profound effect on women than men. It will be followed by a session on Syrian refugee women who faces the loss of their families, financial difficulties and abuse. Activists and academics will also discuss women in the workforce and workplace discrimination, a key issue that hinders the advancement and growth of women in the workplace. Low wages and maternity leave will also be issues addressed in the session. Other sessions including"Women's Role in Politics" "Decision Mechanisms," "Combating Violence Targeting Women," "Cultural Codes and Masculinity," as well as "The Portrayal of Women in Cinema, Television and Social Media," will also be held at the summit.

Addressing the event on Friday, President Recep Tayyip Erdoğan said in order to reach goals for a better world and for humanity, it is important to resolve the problems faced by women in society first and foremost, expressing his hope that summit discussions would, "Illuminate the path towards a better, more equal world for everyone." The president touched upon gender equality with reference to verses from the Quran, pointing out that according to Islamic belief, both females and males are equal. The president also stressed that Islam, as a religion, rejects a belittling mindset towards women, while saying that gender-related injustice has been a problem faced by women for centuries, asserting that women have suffered more greatly than men in terms of cruelty and injustice in society. "Women face discrimination in the workplace simply because of their gender and they are forced to adhere to an image carved for them by modern society. The exploitation of women has been almost institutionalized under the guise of customs," Erdoğan said. He noted that Turkey, under his tenure as prime minister, strived to relieve the burden of women with new regulations that encouraged their participation in the workplace.

U.N. Regional Director Gisladottir touched on the plight of female Syrian refugees while addressing the summit, pointing out that Turkey has hosted an estimated 697,000 Syrian women with urgent needs, praising Turkey for providing aid to these women. Gisladottir said many of these women were impoverished and has called upon the international community to assist these women.

Gisladottir also spoke about violence targeting women, saying that this is one of the most common and tragic violations of human rights in the world, stressing that people should be treated equally regardless of race, gender, religion or culture.
RELATED TOPICS