Museum dedicated to former President Gül opens in his hometown 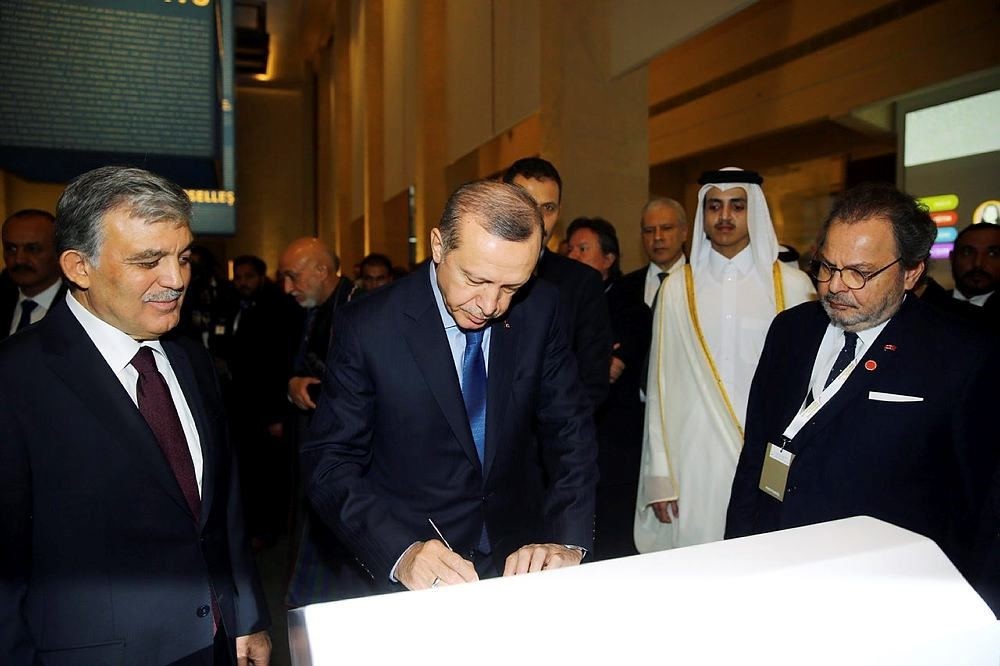 Former President Abdullah Gu00fcl (L) and President Erdou011fan (C)
by Daily Sabah Dec 05, 2016 12:00 am
Kayseri, a city in central Turkey, hosted the country's last two presidents, prime minister, ministers and an array of foreign leaders yesterday for the opening of a museum named after Abdullah Gül, the Republic's 11th president. Offering a window into the country's recent political past, Abdullah Gül Museum in the former president's hometown was inaugurated by Gül himself who accompanied his successor, incumbent Recep Tayyip Erdoğan. Prime Minister Binali Yıldırım and a group of foreign politicians who served during Gül's tenure between 2007 and 2014, including former Afghan President Hamid Karzai and former Serbian President Boris Tadic also attended the ceremony.

The museum located in the campus of Abdullah Gül University, exhibits the personal possessions of the 66-year-old politician, his previously unreleased photographs, the texts of his speeches, gifts he received during his presidency, awards, clothes he wore in each stage of his life from childhood to presidency and interactive presentations on the recent political history of Turkey. Items that made it into the annals of politics although they were not intended to will also be on display. One of them is the dress worn by former First Lady Hayrünnisa Gül, who shocked the country's secular elite by wearing a headscarf at an official dinner where women wearing the headscarf had long been shunned.

The museum, which also incorporates a library, is 7,000-square-meters large and is the fifth museum dedicated to a president in Turkey. It was originally scheduled to open on July 24 but was canceled after the July 15 coup attempt.

During the opening ceremony, Erdoğan heaped praise on Abdullah Gül who joined forces with him and other veteran politicians to found the Justice and Development Party (AK Party). "Mr. Gül has been a friend of mine since my university years and I recognize him as a well-informed man, almost a library himself. I think the library here will be a reflection of his knowledge and the museum here will also be a reflection of the development of democracy in Turkey," he said. Erdoğan, who first met Gül while they were both young activists in the 1970s, said Gül's election in 2007 for the presidency was a sign of countering attacks "against the national will and democracy," reminding the outrage of the opposition to Gül as president. Erdoğan said he maintained solidarity with Gül while the latter was president and while he was prime minister and extolled Gül for his cautious approach to the political, economic and social problems Turkey weathered during his tenure.

Gül said at the ceremony that the museum, although it bears his name, was actually a tribute to the memories of all. He said the museum was a testimony to the hard times they endured in politics during their stints in the now-defunct RP and Virtue Party (FP). "We did things we can be proud of. We improved Turkey's democracy and broke many taboos. We did good things in foreign policy and extraordinarily improved our ties with the East and the West," Gül said.
RELATED TOPICS