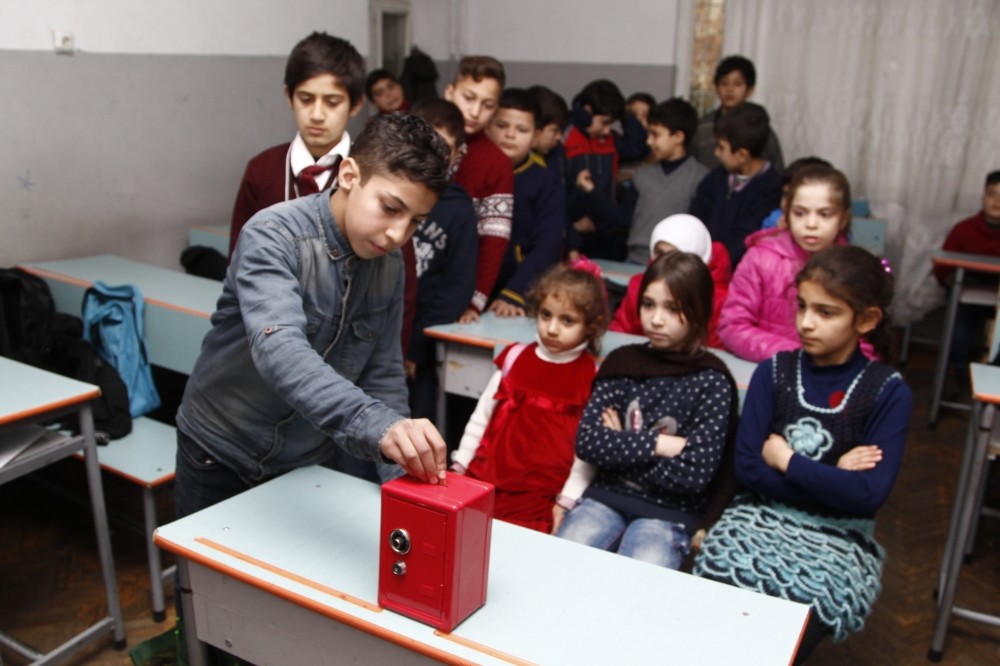 Young Syrian students putting their savings in a donation box in their classroom. Syrians in Turkey are concerned about well-being of their relatives and friends in Aleppo.
by Compiled from Wire Services Dec 15, 2016 12:00 am

Amid reports of the massacre of civilians by forces loyal to Bashar Assad, Syrians who took shelter in Turkey are expressing their emotions for those unable to flee the city to safer areas. A few brave Syrian children living in southern Turkey have decided to the donate what little money they have to the displaced civilians of Aleppo facing starvation

As the world turns a blind eye to the crisis unfolding in Aleppo, where civilians face massacre by forces loyal to Bashar Assad, Syrian refugees who took shelter in Turkey during the civil war are moving to help their country's own with the little they have.

Turkey is at the forefront of efforts for the safe evacuation of civilians from Aleppo and partly succeeded in providing it after a deal with Russia although the Iran-backed militia has hindered the process.

The country, which hosts nearly 3 million refugees from the war-torn lands of Syria, also mobilized for nationwide aid campaigns.

One such aid campaign in southern Turkey had some unlikely donors: Syrian children. Young students at a school run by a charity in the province of Kahramanmaraş, volunteered to donate the little money they had for an aid campaign for Aleppo's displaced civilians.

Saving a few Turkish liras their families gave them to buy food, the boys and girls who were forced to leave their homeland with their parents and relatives donated it to those less lucky than them.

Young Hassan Ukla is one of them. Speaking as he slips a few coins into a donation box in his classroom, he said he decided to donate when he saw photos of people dying in Aleppo.

His family also donated with what they have, from clothes to food.

"People there are hungry. We ask people to help them. Babies, mothers and fathers die. (Killers) have no mercy," the boy told local reporters.

Ibrahim Najjar echoes him and said they decided to donate "all they have" for the people in Syria.

"There is a big war in Syria. People are dying. They have no food and nowhere to go," he says.

Abdallah Ijle, another young boy, said he lost almost all his relatives, "from his cousins to father" in Syria.

"Our families give us money to buy simit (a popular Turkish bagel) but we give them to help Syrians. We do what we can for them. We watch on the news and see people dying there every day," he said.

Elsewhere in Turkey, Syrian refugees who hail from Aleppo anxiously await the safe evacuation of civilians from the city. Gathered in front of TVs or scrolling down the news feeds on social media websites, they hope to get a glimpse of the situation on the ground.

The Beydağı refugee camp in the province of Malatya hosts more than 10,000 refugees who managed to make it into Turkey a few years ago when the conflict aggravated.

Muhammad Gumaa arrived about one and a half years ago with his wife and four children but his parents are still in Aleppo.

"Most of my relatives in Aleppo died. I am able to contact my parents by the phone every day but things get worse," he said, adding that a humanitarian crisis is happening in Aleppo.

"We are worried. Aleppo is destroyed. There is no life, no peace. We only hope the war will end," he told reporters, aspiring to return home once the conflict is over.

Foreign assistance to regime forces and lack of initiatives to end the conflict may dash the hopes of Gumaa, who keeps his spirits high after learning a fragile ceasefire was achieved in eastern Aleppo.

Unfortunately, the ceasefire more or less collapsed as fighter jets resumed lethal air raids later on Wednesday, dealing a blow to plans to evacuate tens of thousands of civilians out of harm's way.

Muhammad Harouf, another Aleppo local who took shelter in Turkey about four years ago, has not heard from his relatives in the city for two years. He said he prays for his two uncles every day.

"Our heart is with Aleppo. We watch the news, go online every day to hear some good news from the city," he said.

In Adana, a southern city near the border, a group of refugees gathered for a rally to denounce the attacks on civilians and pray for them.

In statements in Turkish, Arabic and English, refugees sought to raise awareness to the Aleppo drama, carrying photos of massacres in the Syrian city.

"The international community, Arab states are silent in the face of massacres. We don't want the world to remain silent. Allah will not abandon Aleppo," Rami Suhta, a refugee who read the press statement of the demonstrators, said at the rally.
RELATED TOPICS