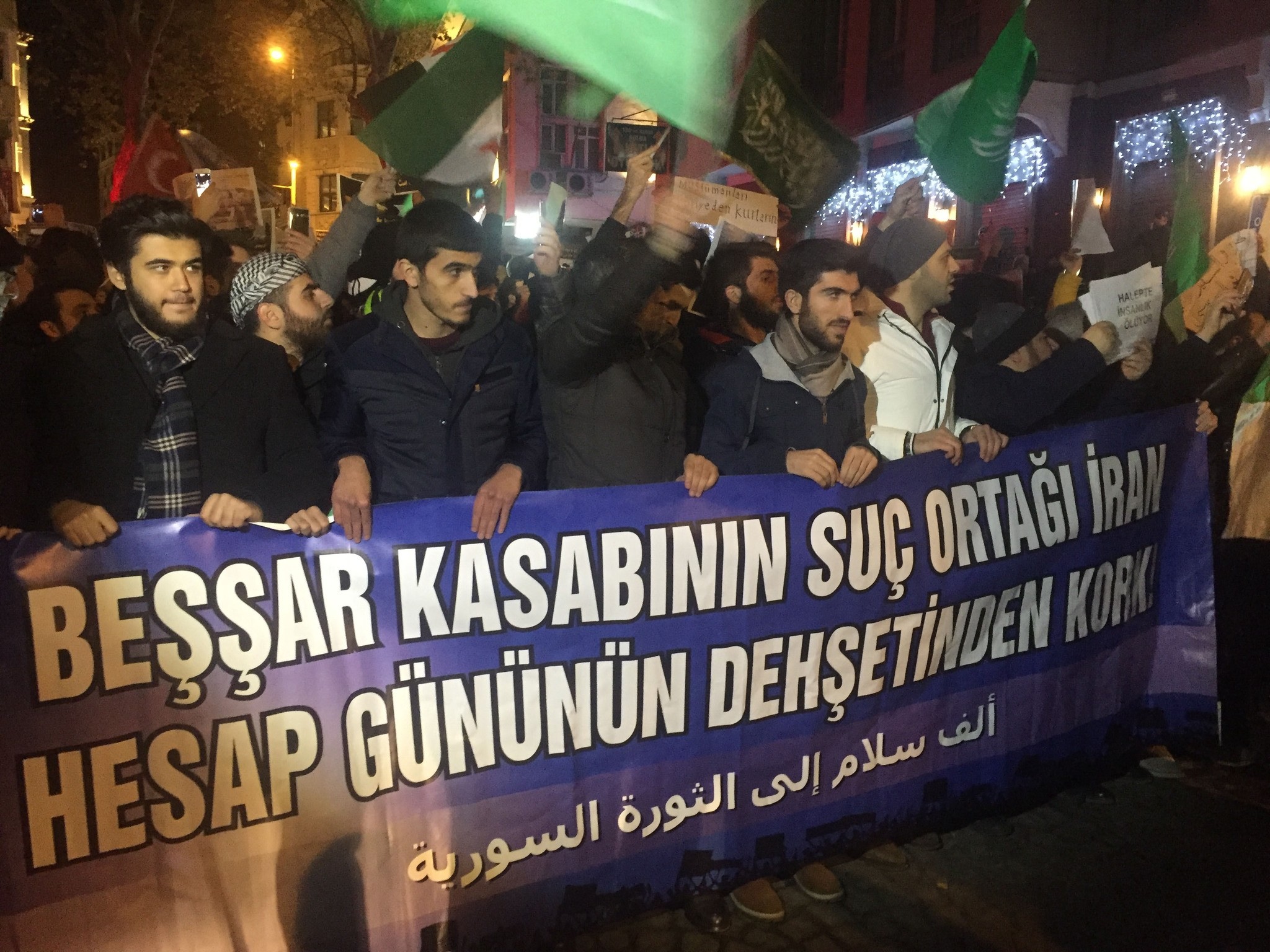 People gathered outside Istanbul consulate of Iran hold a banner reading u201cIran, accomplice of Bashar the Butcher, fear the horror of day of reckoning.u201d
by Daily Sabah Dec 16, 2016 12:00 am

The Iran-backed militia's disruption of the evacuation of civilians from Syria's Aleppo has drawn anger from the Turkish public, who staged protests in front of the Iranian missions on Wednesday and Thursday

Two days of protests in Ankara and Istanbul have targeted Iran, as Turkey's eastern neighbor faces outrage over the killing of civilians in Syria's Aleppo by militias backed by Tehran.

Iran's involvement in the Syrian conflict aggravates atrocities committed on civilians and, in turn, the country now faces a public backlash in Turkey. Turkey has maintained historic ties with Syria and hosts about 3 million migrants who fled the assaults by the Assad regime that targeted civilians. Hence as the Iranian-backed militia moved to block the evacuation of civilians from Aleppo, a city besieged by the Assad forces that indiscriminately target civilians, the Turkish public lashed out against Iran as an"accessory to murder," as some banners in an anti-Iranian protest in Turkey read. The militia is accused of firing at civilians trying to flee conflict-ridden areas.

On Wednesday night, hundreds of people from several Turkish-nongovernmental organizations, accompanied by Syrian students living in Turkey, convened outside the Iranian embassy in the capital of Ankara to protest the killing of civilians in Aleppo, where a fragile cease-fire occasionally collapses amid evacuation efforts.

The crowd was angry at the airstrikes and shelling on some 100,000 civilians who are trapped by the Iranian-backed Shiite militia and regime forces in a small swath of land in the largely-ruined city. The protest followed earlier rallies outside the Russian embassy and Iran's Istanbul consulate, where demonstrators memorialized civilians killed in the attacks that are targeting residential areas of Aleppo. Protesters chanted, "Killer Iran, Get out of Syria" and "Aleppo is shameful for the whole world." In a joint statement, demonstrators said although mankind's history was stained with massacres and genocides, Aleppo was different. "It has been happening before the very eyes of the international community and is being broadcast live," they said. "We have witnessed human rights and humanitarian values promoted by the West being trampled," the demonstrators said. The joint statement acknowledges that merely protesting Iran would not achieve any success, but they aimed to raise awareness among states and governments. "Iran is a killer in this region, and this should be acknowledged by more people. Iran helped the United States during the occupation of Afghanistan and Iraq. Today, it is the architect of massacres in Aleppo," the statement says.

Similar protests were held in several Turkish cities on Wednesday and Thursday, with people condemning the killings of civilians trapped in Aleppo.

Russia, one of the few allies of Syria's Assad, also incurred public outrage in Turkey. Demonstrators staged rallies outside the Russian consulate and embassy over the past two days for the country's support for Assad.

Turkey and Iran enjoy good relations, but the escalating conflict in Syria risks straining the ties, as Ankara is one of the staunchest opponents of the Assad regime, a key ally of Iran. Turkey was also critical of the Iran-backed militia operating in Iraq, another neighbor of Turkey, where efforts are underway to liberate Mosul from Daesh.

Officially, Turkey is pursuing diplomatic efforts to put an end to the conflict through talks with Iran and Russia. Authorities announced multiple phone calls between Turkish, Russian and Iranian officials to maintain a cease-fire in Aleppo, and the continuing evacuation of civilians. Turkey plans to further expand the cease-fire across Syria in talks scheduled for Dec. 27 in Moscow between officials from the three countries.

Syria has been entangled in a civil war since 2011, after the Assad regime cracked down on pro-democracy protests. Iran, which maintained close ties both with President Assad and his father Hafez Assad, the previous ruler of the country, was among the first countries to offer assistance in crushing the opposition that later took up arms and formed the Free Syrian Army in the face of increasing violence by the Assad forces. Members of Iran's Revolutionary Guards have been reported as fighting in Syria, while Hezbollah, the Lebanese faction supported by Tehran, also sent its fighters to aid in Assad's crackdown on rebels. Hundreds of thousands of people are believed to have been killed, and millions more displaced by the conflict.

"You have the blood of the innocent on your hands," demonstrators said in their joint statement against Iran's involvement in Syria.
RELATED TOPICS