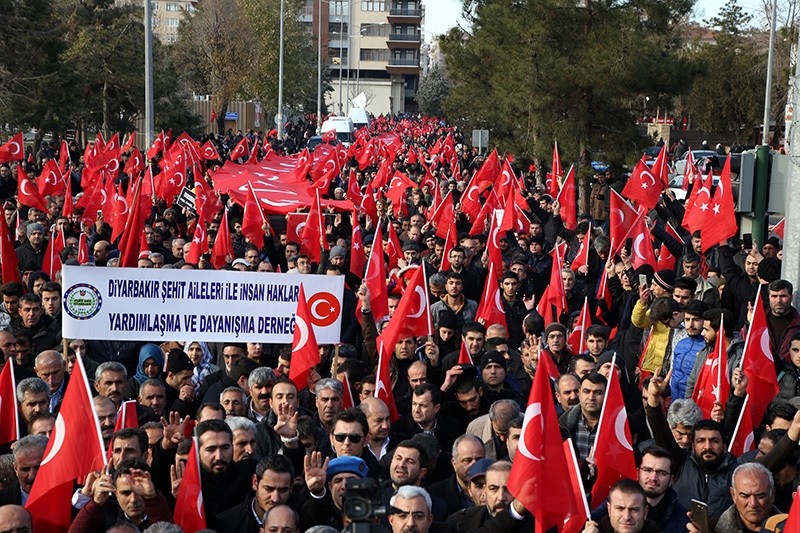 Thousands of people gathered in rallies in cities and towns in Turkey's predominantly-Kurdish southeast on Sunday to condemn the latest PKK terrorist attacks, which come amid a campaign of terror by different terror groups including Daesh, Gülenist Terror Group (FETÖ) and the Revolutionary People's Liberation Party-Front (DHKP-C).

Led by Turkey's largest civil servants' union, Memur-Sen, the rallies brought together thousands in their condemnation of the PKK, which uses the pretext of fighting for Kurds' rights despite an all-time-high opposition from locals due to its tactics which devastate entire neighborhoods, disrupt daily life and economic activity, and drag the youth to the streets, and indiscriminate attacks killing civilians.

People in Diyarbakır, the largest city in the southeast, gathered in the central Yenişehir district despite the cold weather and marched in the streets carrying a very long Turkish flag and chanting anti-PKK slogans. One of the most used slogans during the rally was "Turks and Kurds are brothers, the ones who separate them are traitors."

"Turkey hosted people from Iraq and Syria. If something happens to us, there aren't any countries to host us," Veysi Dönmezdil, a citizen attending the rally, told Anadolu Agency, while condemning the PKK and its attacks.

Another rally was held in the town of Cizre bordering Syria, where locals were joined by others from adjacent tows of Silopi, İdil and provincial center Şırnak.

Located in a strategic position ordering both Iraq and Syria, Şırnak and its district centers were heavily damaged during the months-long clashes between security forces and PKK terrorists in late 2015 and early 2016 amid efforts by the terror group to create strongholds in urban locations.

Some 3,000 people gathered in the town of Yüksekova in Hakkari province despite freezing weather. "We are all the children of this land. We have no separation, no discrimination with anyone, and we won't have them anymore. We hope there would be no martyrs from now on," Tahir Öztepe, a local village headman (muhtar) told Anadolu Agency.

Hundreds came together in a rally in Hakkari's Çukurca district bordering Iraq, an area that usually makes the news with intense clashes between security forces and PKK terrorists since the PKK uses the region to cross the Turkish border from its camps in northern Iraq.

The rally ended as the mufti of the town made prayers for those who were killed in the attacks.