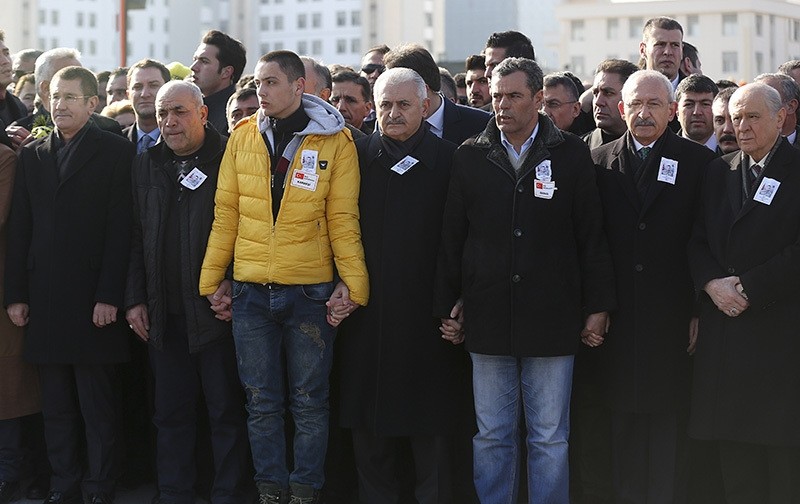 The funerals of some of the 14 soldiers who were killed in Saturday's terrorist attack by the PKK in the central Anatolian city of Kayseri were laid to rest on Sunday, with the rest of the funerals expected to take place in the coming days.

All 14 were in their early twenties and doing their compulsory military service when they were killed. The bodies of the fallen soldiers were sent to their hometowns after a ceremony at a military airbase in Kayseri.

A vehicle carrying explosives was detonated by a suicide bomber early Saturday morning as the bus carrying the soldiers on weekend leave was traveling to the city center. The explosion occurred when the bus stopped at a bus stop near the Erciyes University Faculty of Medicine Gevser Nesibe Hospital. The attack killed 14 soldiers and injured 55 more, 12 of whom are said to have suffered serious injuries.

Authorities said the car used in the attack was reported stolen on Thursday and was driven to Kayseri after its license plates were replaced.

The police arrested 15 suspects after the explosion, including one believed to have directly assisted the suicide bomber. The owner of the car used in the attack is helping with the inquiry, said the police.

Soon after the attack, a counterterrorism summit was held at the Presidential Palace in Ankara under the chairmanship of President Recep Tayyip Erdoğan.

Erdoğan, speaking after the meeting, said all state resources would be mobilized to destroy the sources of terrorism, noting that the whole country was distraught by the attack, coming a week after two synchronized attacks by the PKK in Beşiktaş, Istanbul, killed 44 people, including 36 police officers.

"These attacks are not mutually exclusive from what is happening in Iraq and Syria, or even the fluctuations in the economy. Now is the time to unite, not argue," Erdoğan said.

Prime Minister Binali Yıldırım, speaking on Saturday, said the PKK had lost its ability to take on the military and was resorting to suicide attacks.

The attack was directed at the special commando unit of the military that has carried out operations against the PKK in the southeast. The unit was responsible for killing 710 PKK members in the last five months, reports said.

PKK leaders had ordered its militants to carry out lone wolf attacks, said Yıldırım, adding that the urban infrastructure of the group was largely destroyed.

Yıldırım also said that the government will be assessing whether there were any coordination and communication problems between the National Intelligence Organization (MİT) and the Police intelligence.
Last Update: Dec 18, 2016 5:57 pm
RELATED TOPICS