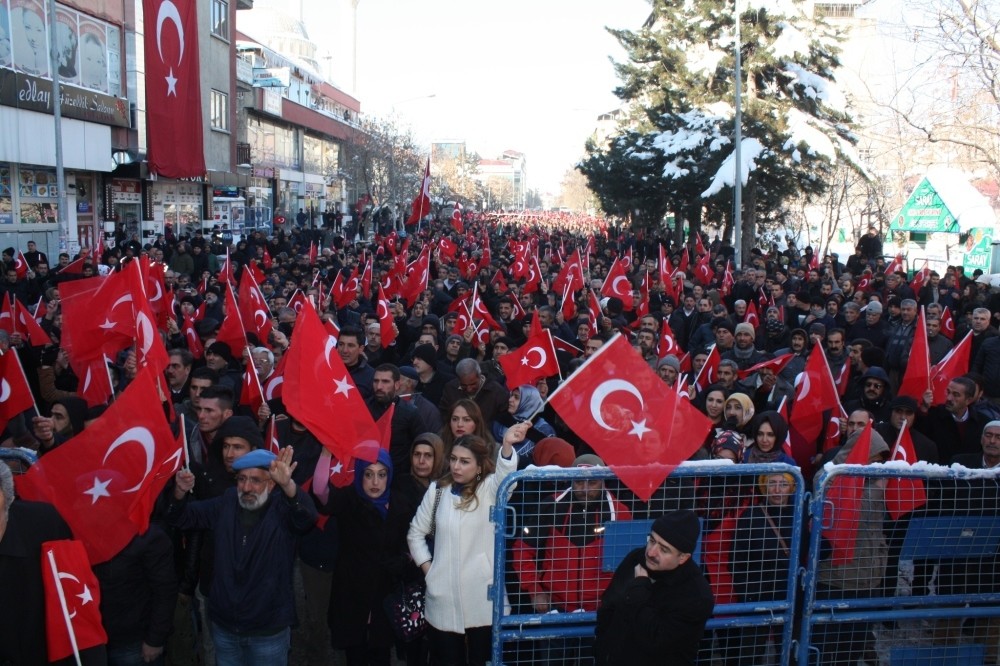 Thousands poured into the streets in Bingu00f6l to denounce the terror attacks blamed on the PKK.
by Daily Sabah with AA Dec 20, 2016 12:00 am

Public outrage over the second major terror attack in a week grows with thousands taking to the streets to denounce the attack in the central city of Kayseri, blamed on a Syria-trained militant linked to the PKK, while people continue paying tributes to the 14 victims

Two major terror attacks last Saturday and this Saturday drove protests against terrorism as thousands took to the streets on Sunday and yesterday across the country.

Fourteen soldiers on weekend leave were killed and 55 others were injured in the central city of Kayseri on Saturday when a car bomb exploded next to the bus carrying them. Media reports yesterday said the perpetrator of the attack was a suspect who received training in Syria at the militant camps of an affiliate of the terrorist group the PKK, which is also blamed for the Dec. 10 terror attacks in Istanbul that killed 44 people.

In the eastern province of Bingöl, where the PKK occasionally carried out terror attacks and also maintained hideouts, thousands took to the streets yesterday, unfurling giant Turkish flags. The patriotic march held by nongovernmental organizations was a culmination of the outrage against the terrorist group. The crowd, gathered at Martyrs' Square in the province, chanted slogans against the PKK, which seeks to recruit militants from the region with a predominantly Kurdish population. Reading a statement on behalf of the crowd, Naim Tan, the head of a local NGO, said the terror attacks were a continuation of the July 15 coup attempt - which was blamed on the Gülenist Terror Group (FETÖ) - and FETÖ, the PKK and other terrorist groups were "the products of the same powers" trying to destabilize Turkey. "We have to stick to our common sense instead of losing it because of our anger and act in unity without losing our temper," he said. "The terrorist groups are doomed to fail in their efforts to divide us and we will support our state's anti-terrorism efforts," Tan added.

In Kayseri, locals rushed to help the survivors. Authorities announced that Kayseri residents flooded them with requests to provide accommodation for the families of soldiers killed and injured in the attack. Over the last three days, people flocked to the site of the blast to leave flowers in memory of the victims.

Turkish media outlets reported yesterday that the unidentified suspect of the attack received training at the PKK's Syrian offshoot the Democratic Union Party (PYD) camps in Syria's Kobani and entered Turkey from Syria through unlawful means.

According to reports, the suspect traveled to the southeastern Diyarbakır province's Lice district after entering Turkey through the rural Suruç district.

Intelligence sources claimed that the suspect received bomb and weapons training at the PYD's camps in Kobani, similar to the perpetrator of Istanbul terror attack. Foreign Minister Mevlüt Çavuşoğlu had said following the Istanbul twin blasts that one of the suspects entered Turkey from Syria a week before the attack.

The perpetrator of the Kayseri attack reportedly picked up the bomb-laden vehicle, containing 200 kilograms of explosives from Lice and headed to Kayseri. The vehicle had been stolen two days before the attack in Şanlıurfa and was brought to Lice to load it with explosives.

A total of 15 people, including the driver of the public transportation bus carrying off-duty soldiers, have been detained as part of the probe launched following the attack, the Kayseri Governor said yesterday. He added that more detentions could take place to catch the suspects involved in the attack.

DNA procedures are still ongoing to identify the perpetrator of the terrorist attack.

The PYD/PKK has aimed at establishing a self-declared autonomous canton from Syria's northwestern Afrin to Kobani and Jazeera cantons in the northeast, which moderate opposition groups they have opposed as it threatens Syria's territorial integrity.

Due to organic organizational links between the PKK and the PYD, Turkey sees the PYD as a terrorist establishment in its borders, which Ankara has said numerous times it will not allow.

Meanwhile, the Turkish Interior Ministry announced yesterday that over 920 suspects have been held on terror charges as part of an anti-terror sweep in the latest operations in 45 provinces against those accused of aiding and abetting the PKK.

Separately, the ministry said the Turkish police and army had carried out 213 operations since last week.

A ministry statement said two PKK terrorists were killed and five others were injured during the anti-terror operations, but no further details were given.
Last Update: Dec 20, 2016 2:00 am
RELATED TOPICS