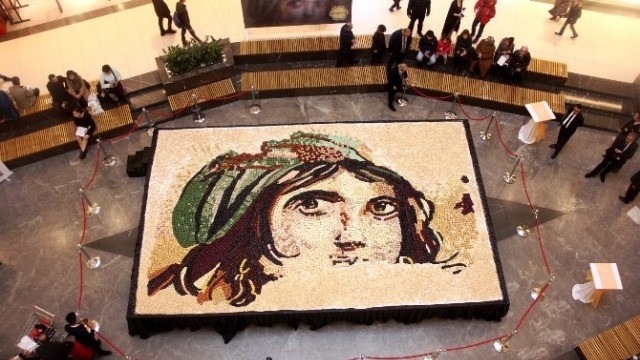 by Daily Sabah with AA Dec 26, 2016 12:00 am
Turkey's traditional and authentic dessert "baklava" got a creative touch from artists, chefs and children who broke a world record on Sunday in the southeastern Gaziantep province, by making a giant figure of the world-renowned "Gypsy Girl" mosaic from Turkish baklava. Prepared in 10 months, the large figure was made from 750 kilograms of baklava, equivalent to 6,160 baklava slices as part of World Children Records. Amazingly, the mosaic baklava extends around 39 square meters.

Fifteen mosaic artists, 60 baklava chefs and 100 children gathered for the record bid to mark the 95th anniversary of the liberation of Gaziantep with the initiatives of the International Mosaic Artists Association (UMOSAD).

Having presented to locals at a shopping mall in Gaziantep, the record attempt was affirmed by a delegate from the World Children Records. Overseeing the record-breaking ceremony, Gaziantep Mayor Fatma Şahin said, "Our city stands out with its archaeological richness and civilizations that flourished on this territory. We are heading to the future by gaining strength from the past."

Housing the famous "Gypsy Girl" mosaic, the Zeugma Mosaic Museum, described as the world's biggest mosaic museum, has been drawing thousands of people from Turkey and the world. The ancient city of Zeugma in the Nizip town in Gaziantep was founded by Alexander the Great's generals in 300 B.C. Carrying traces of prosperity and magnificent periods of history, the mosaics that can be found in the museum were once in the lavishly decorated houses of wealthy traders and military officials of the Roman Empire.In the 1980s, the Gaziantep Archaeology Museum conducted the first excavation of the city and uncovered graves and statues. Another excavation conducted in 1992 unveiled beautiful mosaics and brought Zeugma to the archaeological scene.
RELATED TOPICS