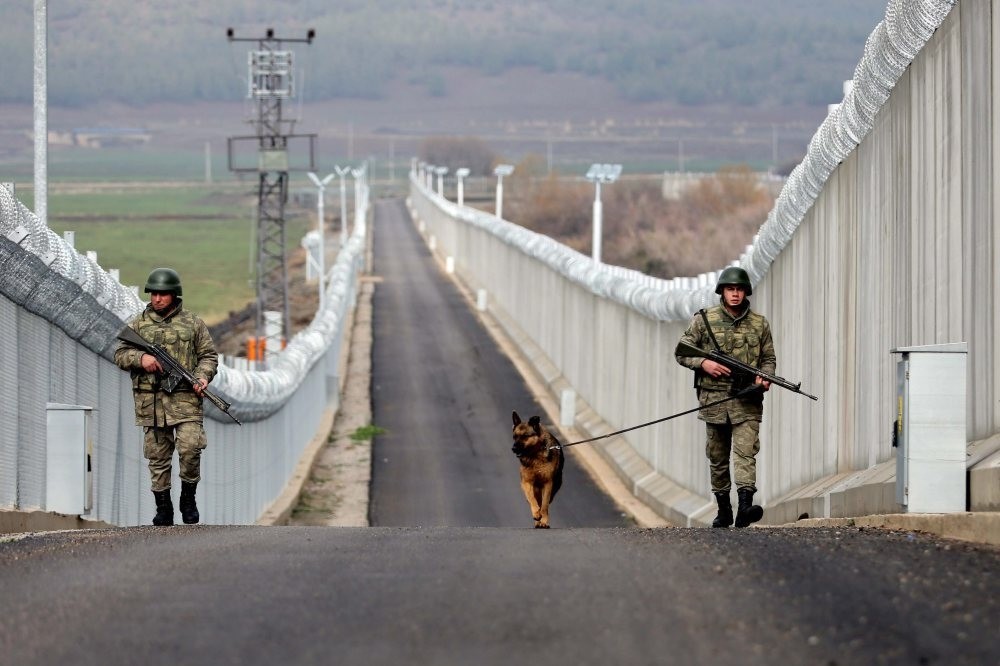 Troops patrol a completed part of the wall that stretches along the border.
by Uğur Yıldırım
Jan 03, 2017 12:00 am
One of the longest in the world, a wall encompassing Turkey's volatile border with its southern neighbor Syria will be extended as the country helps Syrian rebels to liberate more border towns from the Daesh terrorist group.

Dubbed the "Turkish Wall" by local media drawing comparisons to the Great Wall of China, the concrete blocks that straddle the 900-kilometer (559-mile) long border will be manned by troops.

A 77-kilometer section of the 105-kilometer-long wall between Azaz and Jarablus, two previously Daesh-controlled Syrian towns cleared by the Free Syrian Army (FSA), has already been completed. Turkish authorities have announced that the wall will be finished in the first half of 2017.

The concrete blocks, which are 2 meters wide, 3 meters high and weigh 7 tons, are being installed on the border where Turkey faces the threat of infiltration and attacks both by the Daesh and a Syrian-affiliate of the PKK, the Democratic Union Party (PYD).

The wall's construction was hampered at times by the spillover of violence from Syria, which is torn by an ongoing conflict with multiple actors including forces loyal to Bashar Assad, Daesh and the PYD. In an effort to protect itself from the Daesh threat, Turkey launched Operation Euphrates Shield on Aug. 24 in Syria to help the FSA save towns held by the Daesh. The operation proved successful so far despite casualties with rebels accomplishing the liberation of Azaz, Jarablus and Manbij, among other smaller settlements in areas near Turkish border.

The wall is being built behind minefields, deep ditches and is reinforced with barbed wire and steel fences. On watch towers along the border wall, soldiers monitor the security while armored military vehicles patrol around the clock.

Military sources say the wall has already significantly curbed smuggling and "irregular crossings." In an area covering Gaziantep and Kilis, two Turkish cities used as major gateways into Turkey by smugglers from Syria, only 76 cases of smuggling were detected in 2016 while it was 2,044 in 2015.

The wall will now be further extended to the country's border with Iraq, where both the Daesh and the PKK have hideouts.
Last Update: Jan 03, 2017 1:08 am