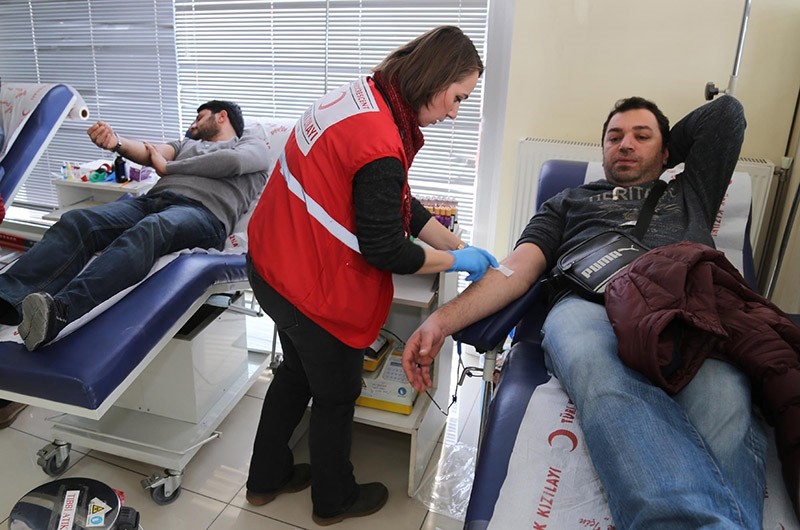 Daily blood donations reached a record high of 13,241 units on Wednesday after Turkish Red Crescent (Kızılay) called on people to replenish its depleted stocks during the winter season.

Kınık notified people through his Twitter account on Jan. 3 that the charity's blood stocks were running low due to winter. He explained that when stocks fell to under 20,000 units they issued a "red alarm," and when their stocks were at 17,000 they called on people to mobilize for blood donations.

As of Thursday, Kızılay's stocks have reached 23,082 units. Kınık stated that the number should be increased to 40,000 for Kızılay to be prepared for all disasters in a worst-case scenario.

Kınık added that although the donations stood at 13,241 after applications were assessed based on the health conditions of the donor, the number of applications to blood donation centers were much higher. He also said that if their capacity was sufficient, the number of donations on Thursday could have easily reached the 30,000 – 40,000 mark.

The previous record for Kızılay was set on April 27 2016 with 10,966 units, Kınık said, expressing his gratitude for media outlets, press employees, NGO's, fan groups, companies, universities, youth organizations and all citizens who were sensitive to the issue.

Kızılay provides up to 11,000 units of blood a day to 1,300 hospitals throughout Turkey, which peak on Tuesdays, Wednesdays and Thursday, when most surgeries are carried out. The average need for blood on the rest of the days of the week stands between 7,000 to 10,000 units a day.
Last Update: Jan 05, 2017 4:10 pm
RELATED TOPICS