Nation walks in memory of fallen World War I soldiers 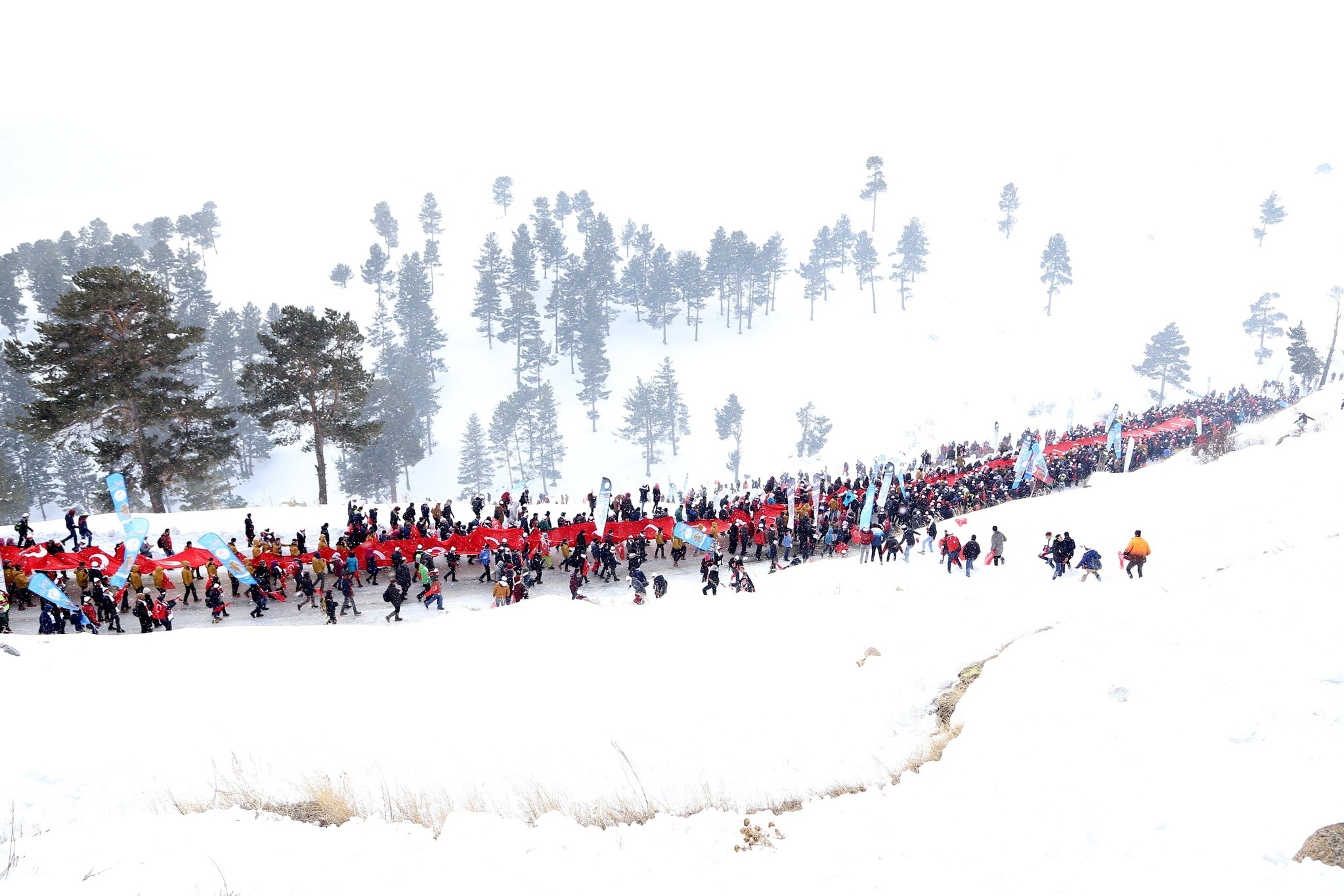 In freezing weather, thousands marched along the road lined with pine trees in Saru0131kamu0131u015f.
by Compiled from Wire Services Jan 09, 2017 12:00 am
Thousands of people across the country hit the streets on Sunday to commemorate the disastrous Sarıkamış campaign of World War I during which 90,000 soldiers froze to death in eastern Turkey.

Patriotic rallies were held amid heavy snowfall in almost all cities across the country but the focal point of commemorations was in Sarıkamış, now a district of the easternmost Turkish province of Kars.

On the 102nd anniversary of the deaths, some 25,000 people, including the Youth and Sports Minister Akif Çağatay Kılıç and Transportation and Telecommunications Minister Ahmet Arslan, a native of Kars, walked a 4.5-kilometer route where the soldiers are believed to have frozen to death in cold weather while walking to liberate the Russian-occupied eastern territories of the ailing Ottoman Empire.

Families of those killed in terror attacks and veterans of Turkey's counterterrorism campaigns also joined the march under tight security measures.

The crowd convened on a summit of the mountain range that was the sole obstacle before Ottoman troops commanded by Enver Pasha. Braving temperatures dropping to minus 6 degrees Celsius and snowfall, the crowd marched with Turkish flags, chanting Allahu Akbar (God is the greatest), an Islamic chant that was commonly used by the Ottoman army.

The Ottoman military band, Mehter, accompanied the march that ended at a cemetery for the fallen troops.

Large-scale commemoration ceremonies have been held every year since 2003 when it was confined only to a bunch of climbers and activists.

The Sarıkamış offensive undertaken by the Ottoman high command was the first military operation of the empire in World War I.

The offensive that began late in December 1914 in the dead of winter quickly bowed down due to adverse weather conditions, with units lost in the blizzard. Only a few units reached the destination of Sarıkamış, which was under Russian occupation at the time, and were repulsed.

Most of the troops froze to death even before they reached the Russian lines.

Despite the Ottoman defeat, Russian command was alarmed enough to call for help from its allies, which initiated the famous Gallipoli campaign where Ottoman forces emerged victorious.

People marching in Sarıkamış on Sunday left soil brought in from Gallipoli to the cemetery of the fallen soldiers.

Speaking at the commemoration ceremony, Ahmet Arslan said the fallen soldiers have traveled to Sarıkamış from all across the imperial territories, from Yemen to Syria and Iraq.

"Today, we have people from all across the country here to remember them with respect. We want to remember the past and how people were united to defend Turkey. Soldiers as young as 15-year-old were martyred here, just like our youth, as young as them, took to the streets on July 15 to defend the homeland," he said, referring to foiled coup attempt last summer that was staved off thanks to strong public resistance.

Minister Kılıç said it was the first Sarıkamış commemoration since the July 15 coup attempt that was a repeat of victory for the nation.

"We know what our ancestors sacrificed for this country and we are determined to make sacrifices like them for our country," he said.
RELATED TOPICS