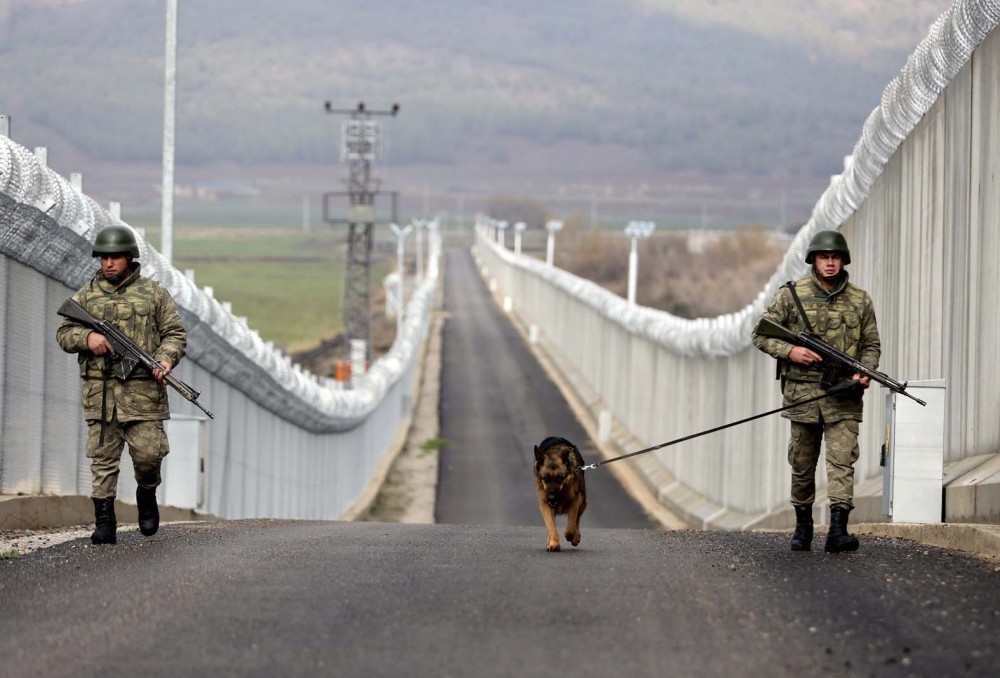 by Daily Sabah with AA
Jan 10, 2017 12:00 am
A security barrier dubbed third longest border wall represents respite from a spillover of violence from Syria for residents of Turkey's border towns. The wall stretching through the country's lengthy border with its war-torn neighbor is the ultimate in Turkey's measures against attacks from Syria, which hosts multiple terrorist groups bent on striking the country in cross-border operations. A local who lost relatives in rocket attacks from Syria praised the wall for providing safety to thousands living near the border while others believe it might foil further attacks through the border that killed dozens since the conflict erupted in Syria six years ago.

The wall encompassing the volatile border comes at a time when the country helps Syrian rebels to liberate more border towns from the Daesh terrorist group. Dubbed the "Turkish Wall" by local media drawing comparisons to the Great Wall of China and Mexican-United States border, the concrete blocks that straddle the 900-kilometer (559-mile) border will be manned by troops. A 77-kilometer section of the 105-kilometer-long wall between Azaz and Jarablus, two previously Daesh-controlled Syrian towns cleared by the Free Syrian Army (FSA), has already been completed. Turkish authorities have announced that the wall will be finished in the first half of 2017. The concrete blocks, which are 2 meters wide, 3 meters high and weigh 7 tons, are being installed on the border where Turkey faces the threat of infiltration and attacks both by the Daesh and a Syrian-affiliate of the PKK, the Democratic Union Party (PYD).

The wall's construction was hampered at times by the spillover of violence from Syria, which is torn by an ongoing conflict with multiple actors including forces loyal to Bashar Assad, Daesh and the PYD. In an effort to protect itself from the Daesh threat, Turkey launched Operation Euphrates Shield on Aug. 24 in Syria to help the FSA save towns held by the Daesh. The operation proved successful so far despite casualties with rebels accomplishing the liberation of Azaz, Jarablus and Manbij, among other smaller settlements in areas near Turkish border.

The wall is being built behind minefields, deep ditches and is reinforced with barbed wire and steel fences. On watch towers along the border wall, soldiers monitor the security while armored military vehicles patrol around the clock. İsmail Özer lost his wife and sister five years ago when artillery shelling from the Syrian side hit his town Akçakale in Turkey's Şanlıurfa province. He is pleased with the ongoing construction. "It will prevent greater suffering and will make us feel safer again," he told Anadolu Agency. Hadi Asrak, an administrator of the Hürriyet neighborhood located a few meters away from the Syrian side, says they have been going through ordeals for years because of the ongoing war in Syria. Apart from deaths from shelling, the local population has been traumatized by damage to their houses and children are "scared," Asrak told Anadolu Agency. Aziz Dal resides in a house only 100 meters away from the Syrian side. "We used to live under daily shelling. Shrapnel, bullets used to break our windows and riddle the walls. My family, children were very afraid before. Now we feel safer," he says. Abdülhakim Ayhan, the mayor of Akçakale, says more than half of the Syrian side of the border is under the control of terrorist groups and the wall would also prevent the smuggling of explosives and weapons into Turkey from Syria. Daesh and the People's Protection Units (YPG), two terrorist groups active in Syria have sent militants into Turkey in the past to carry out a string of deadly attacks.