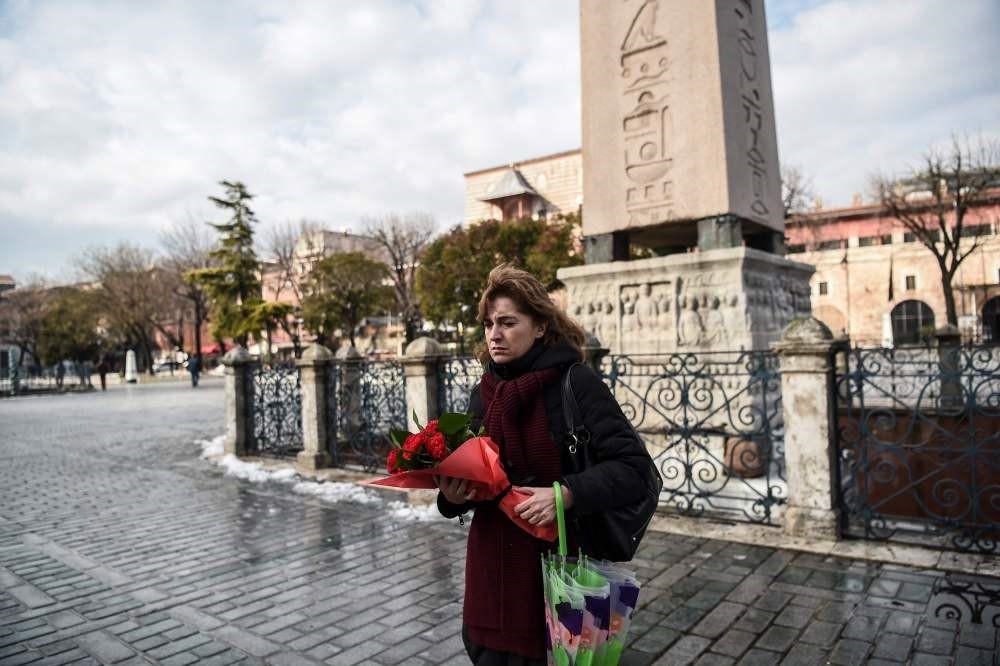 Sibel u015eatu0131rou011flu, Turkish tour guide who survived the attack, stood alone at the blast site yesterday before laying flowers in memory of victims.
by Daily Sabah with AFP
Jan 13, 2017 12:00 am
On an unusually warm day in January one year ago, Istanbul was rocked by a terror attack that killed 12 German tourists visiting the city's popular landmarks. Yesterday marked the anniversary of the attack blamed on Daesh. Apart from a short message, German diplomatic missions in the country apparently chose not to remember victims as no commemoration ceremony was held, to the chagrin of Sibel Şatıroğlu.

Şatıroğlu was one of the few people visiting the ancient obelisk at Istanbul's Sultanahmet Square. The Turkish woman was the tour guide for the slain German tourists and was taking them to the Blue Mosque and the Hagia Sophia museum when she noticed a man with a bulky coat approaching them. As he attempted to blow himself up, Şatıroğlu shouted "lauft weg" in German, which means "run away," and saved more lives as the crowd around her managed to run away in time. She herself was injured in the attack.

She arrived at the square alone yesterday, leaving flowers at the scene, which was largely empty due to the cold weather. Still haunted by the attack, Şatıroğlu told AFP that she was there to show her respect to her friends. "I still see them here. Everyone was so happy that day. We were even behind schedule because people were enjoying the nice weather and I had talked too much," she remembers. Şatıroğlu voiced her anger at the perpetrators of the attack and was critical of the German consulate for not commemorating the victims. Social media accounts of German embassy released a brief message stating that they remember the victims.

Since the Sultanahmet bombing, Turkey has been rocked by a string of terror attacks blamed on Daesh and the PKK. Two months after the Sultanahmet bombing, another suicide bomber killed Israeli tourists on the popular İstiklal Avenue in Istanbul. During New Year's celebrations, 39 people, mostly tourists, were killed in a nightclub on the Bosporus shore by a gunman linked to Daesh.