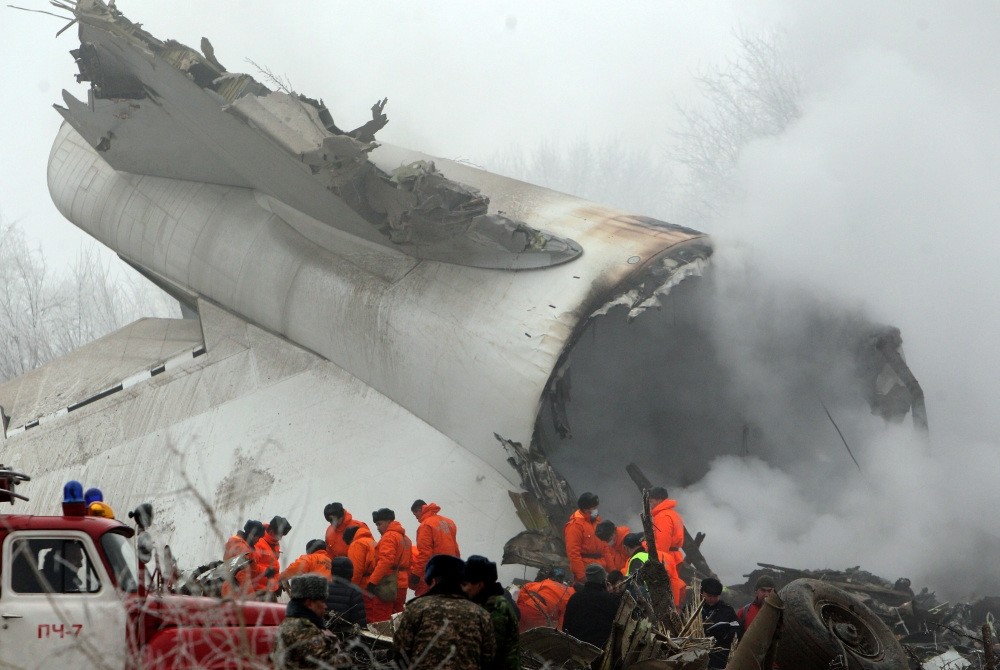 Crews at the scene of the plane crash inspect the debris of the fuselage.
by Compiled from Wire Services Jan 17, 2017 12:00 am
A cargo plane operated by the Turkish-Chinese aviation company MyCargo crashed in the Central Asian country of Kyrgyzstan on Monday, killing at least 37 people including crew members and local residents of a small village where the plane crashed in an accident being blamed on pilot error, according to Kyrgyz authorities.

The Boeing 747 was attempting to land in dense fog at the Manas Airport south of the capital city of Bishkek when it crashed into a nearby village. The accident has initially been blamed on thick fog covering the area at the time of the accident.

The cargo plane had been en route from Hong Kong to Istanbul and was attempting to land at the Manas Airport when the crash occurred. Kyrgyz authorities have reported that 15 buildings in the village were damaged and that six children are among the dead as well as the two pilots, the Turkish flight crew and two workers.

The Kyrgyz government is considering pilot error as a possible cause, though it is still too early to draw a conclusion, Deputy Prime Minister Mukhammetkaly Abulgaziyev said in comments to the state news agency Kabar.

Turkish Airlines (THY) released a statement shortly after the incident, saying that neither the aircraft nor the crew were members of THY.

"A cargo flight with TC-MCL registration number, operated by ACT Airlines, departed from Hong Kong International Airport (HKG) to the Manas International Airport (FRU) in Bishkek where an accident occurred near Bishkek at around 1:40 p.m.," Yahya Üstün, the senior vice president of media relations at Turkish Airlines said.

The airlines also offered condolences to the families of those who were killed in the crash.

Before revising its story, BBC World initially reported that at least 16 people were killed after a THY cargo plane crashed near the Kyrgyz capital of Bishkek, to the chagrin of Turkish social media users who stormed the British broadcaster's social media account urging it to correct its mistake, accusing the BBC of "manipulating" reports and spreading "false news."

MyCargo released a statement late Monday saying it is "clear" that technical faults or overloading did not cause the crash and that an investigation would reveal the real cause of the incident.

MyCargo changed its name from ACT after China's HNA Group acquired 49 percent of its shares in 2011. More than 50 percent of its shares belong to Dağlar Çizmeci, the son of Yavuz Çizmeci, a prominent aviation tycoon who was convicted in a 2007 plane crash in the western Turkish city of Isparta where 57 people were killed when an Atlas Jet plane leased by Çizmeci senior's World Focus carrier crashed.

The Turkish Ministry of Transportation, Maritime Affairs and Communication said in a statement that two experts will be sent to Kyrgyzstan in order to investigate the crash, while Foreign Minister Mevlüt Çavuşoğlu called his Kyrgyz counterpart to offer Turkey's assistance in the aftermath of the crash.
RELATED TOPICS