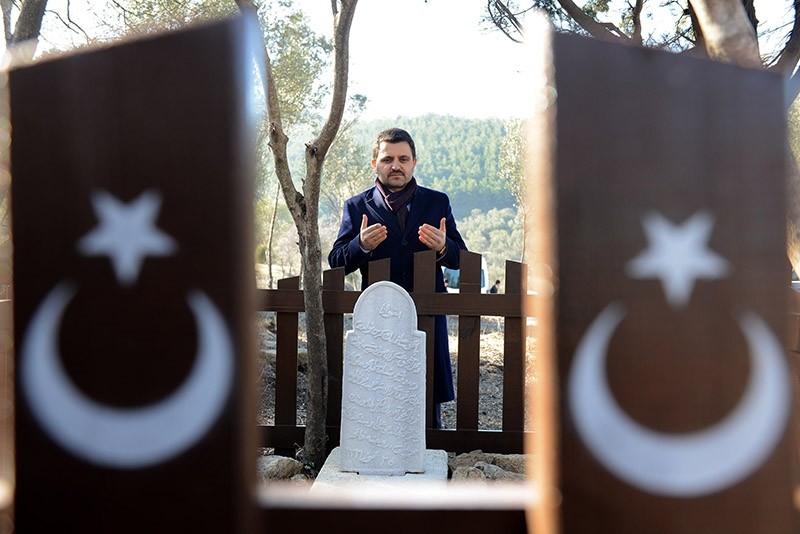 The Gallipoli Site Management Directorate has found the corpse of a Turkish soldier, who died 102 years ago, during landscaping and cleaning works.

Subsequent investigations revealed that the tomb contains the corpse of a Turkish Ottoman soldier, named Sergeant Mehment, who came from the Safranbolu district of the northern Turkish city of Karabük.

Sergeant Mehmet was killed during the fierce Gallipoli battle of the First World War, in 1915, which was fought between the Ottoman Empire, backed by Germany, and the Allied Powers, including Britain and France.

Involving more than half a million servicemen from all sides, the battle ended with an Ottoman victory at a cost of tens of thousands of casualties.

The site management directorate discovered the lost tomb near the Kilitbahir village of the Çanakkale province's Eceabat district, during landscaping and site cleaning works.

Sergeant Mehmet's tomb was covered by ground and vegetables, which had grown over the tomb over time, which had kept it hidden for such a long time.

The corpse was identified after the tombstone, marked with Arabic letters, was translated into modern Turkish.

Site Director Ismail Kaşdemir, who head the team which discovered the long-lost tomb, said that the tomb had been discovered near a site which was used as a military hospital and graveyard during the Gallipoli Battle.

Kaşdemir also indicated that they undertook the restoration and maintenance of the tomb.

''Brothers, do not believe I am dead, I just reached the highest grade any soldier can reach. In order to save our homeland and our religion, this is the most honorable death of the Turk. Sergeant Mehmet, son of Moulder Ali from Safranbolu, from the second battalion of the 42nd regiment,'' the tombstone read, Kaşdemir also noted.

Kaşdemir added that their work and investigations are ongoing into the battle site.