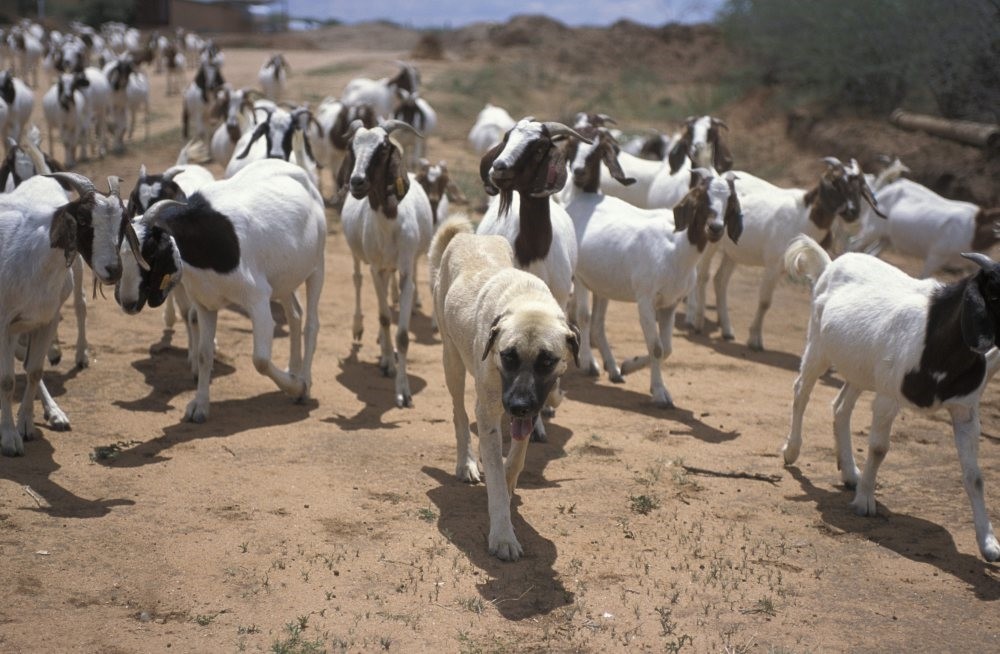 Kangal dogs serve as an intimidating force against cheetahs preying on livestock. (Courtesy of TIKA)
by Compiled from Wire Services Feb 09, 2017 12:00 am

Kangal, a guard dog native to Turkey and dubbed the ‘Anatolian lion,' helps farmers in Namibia by protecting herds from cheetah attacks and preventing slaughter of endangered cheetah. State-run agency TİKA provides aid to a local fund to protect cheetahs and care for kangals

The kangal, a canine breed native to Turkey, nowadays helps farmers in the southwestern African country of Namibia where farmers receive the strong guard dogs courtesy of a local fund. The Turkish Cooperation and Coordination Agency (TİKA) helps the fund to transport dogs and protect cheetahs by donating a shelter and a vehicle.

Deployed to deter cheetahs from attacking livestock, a means of living for many farmers in the country, the kangal also helps maintain the natural cycle by preserving endangered cheetahs, which otherwise face the danger of being slaughtered.

TİKA officials recently donated a shelter and enclosure for the kangal cubs, which are being held at a center run by the Cheetah Conservation Fund. Speaking during a visit to the African country, TİKA President Serdar Çam said his agency previously donated a vehicle to the center for transportation between different farms where kangals are deployed. Çam told Anadolu Agency that the kangals were not the only aid from the agency to Namibian farmers and they would provide workshops for livestock breeding to train more people in the agriculture sector.

The cheetah, the world's fastest mammal, which can run about 120 kilometers per hour, preys on livestock and is an endangered species according to the Cheetah Conservation Fund. The fund focuses its work in Namibia, which is believed to have the largest population of the animal. Desperate farmers, whose sole income is livestock breeding, often turn their guns against cheetahs, worrying conservationists, while poaching of the animals for their valuable fur add to their woes. The number of cheetahs was around 100,000 a few decades ago and has now dropped to below 10,000. Kangals are the preferred choice of herdsmen all across the globe for effectively blocking any attack, often without doing any harm to animals preying on herds. Cheetahs, for their part, often avoid contact with other predators due to their fragile bones, providing a downside in any confrontation with other mammals. The Cheetah Conservation Fund had been employing kangals for years, and nearly 600 cubs have been delivered to farmers. TİKA's vehicle assistance helps the fund reach out to farmers to transport dogs as well as for their training and health checks.

The center, where cheetahs are held separately from kangals, currently hosts 15 guard dogs and more than 30 cubs.

Dogs native to Turkey, such as the kangal and akbaş, another "Anatolian shepherd dog," are mainly used as guard dogs for livestock in Turkey and are also popular among farmers across the globe. Recently, they were sent to Yellowstone National Park in the U.S. to protect wildlife.

Aside from their protective skills, Anatolian shepherd dogs are also used for psychological therapy for children, especially those with autism, and for those recovering from drug addiction. A large and powerful animal, the origin of the Anatolian shepherd dog dates back more than 6,000 years. They are capable of enduring Turkey's harsh climate in winter and the nomadic lifestyle of shepherds.

TİKA, a previously little-known state apparatus founded to help former Soviet republics, rebranded itself in the past decade as a major agency reaching out to the far corners of the globe for humanitarian and development aid. From the restoration of historical sites to hospitals and the training of farmers in impoverished countries, it runs hundreds of projects on all continents.
Last Update: Feb 09, 2017 11:26 am
RELATED TOPICS