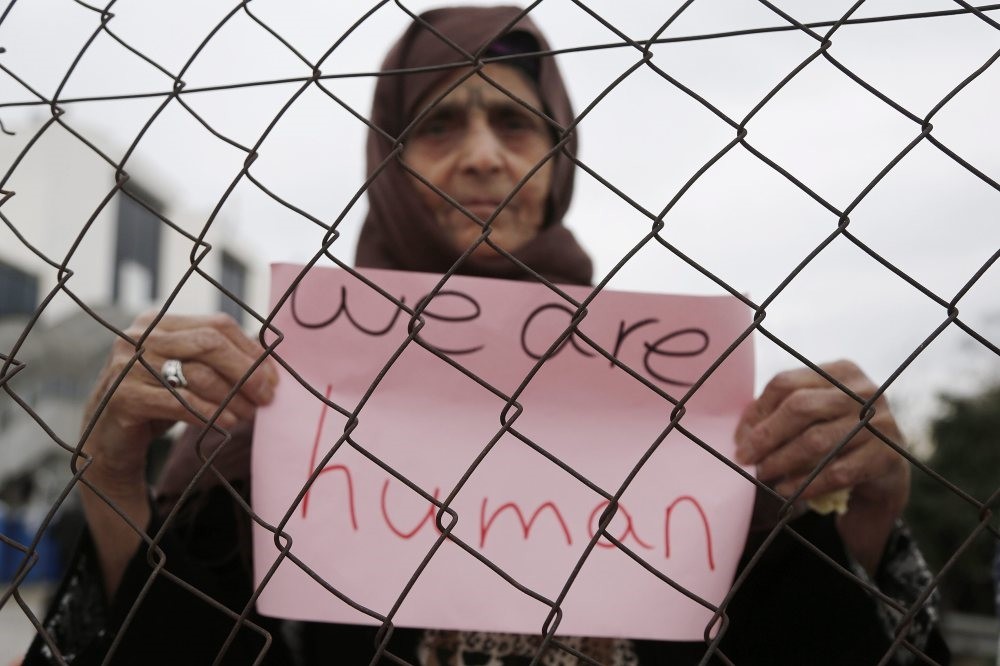 A refugee woman holds a placard during a protest demanding better living conditions at a makeshift refugee camp inside a former airport in Athens on Feb.5.
by Compiled from Wire Services
Feb 10, 2017 12:00 am

Once a popular gateway for illegal immigrants into Europe, Greece's tolerant attitude has slowly changed into something mean as it ‘pushes back' more migrants to Turkey after beating and torturing them

Greece has long been the first destination for illegal immigrants setting out on a journey to Europe via Turkey, be them Syrians or nationals of remote Asian countries. Though it embraced refugees seeking permission to cross into other European countries, particularly Germany for the past two years, Greece has slowly become an unfavorable place for migrants due to its worsening attitude and horrid living conditions that are forcing migrants to return to Turkey.

Over the past weeks, some 40 migrants who snuck into Greece with the hope of seeking asylum were illegally deported after they were allegedly beaten by Greek security forces who then towed the refugee boats back to Turkish waters.

This practice, illegal under international conventions, continued late Wednesday as well. Fourteen Syrians and one Afghan migrant were forced to return to Turkey after they were beaten by Greek officers, they claimed.

Taken aboard a boat on Evros (Meriç) river between Greece and Turkey, they were forced to travel back to Turkey at gunpoint. Migrants, including children, who were trying to reach Germany via Greece, were assisted by Turkish border patrol in the province of Edirne. Muhammad Abdou, a Syrian man traveling with his family to Germany where his relatives live, told local reporters that Greeks forced him, his wife and children to get aboard the boat.

Iman Maskoudi, another Syrian, said Greek police left them starving for two days during their detention there.

"They did not treat us well. They were supposed to take us to a center for those to be deported but they did not. They never registered us (as illegal immigrants). Then, we were forced to walk for hours in an unknown area near the border. They told us to get aboard the boats and anyone refusing was beaten. They took our cell phones and dumped them into the river. It was Turkish soldiers who helped us and cared for us when we crossed back into Turkey," he told reporters.

Turkish media outlets say Greece has "pushed back" some 4,000 illegal immigrants in the past three months. Based on the accounts of the illegally deported migrants, Greek police officers are accused of confiscating valuable possessions of migrants and torturing migrants.

Edirne Governor Günay Özdemir told reporters earlier this week that they had evidence of Greece's constant "violation of international agreements on the humane treatment of refugees" by pushing them back to the Turkish border after torturing them.

"We have accounts of both migrants and border officials and we conveyed our concerns about it to the international community," Governor Özdemir had said.

Migrants have claimed that Greek police intimidated them with dogs and weapons and beat them before being sent back to Turkey. They have also claimed that police confiscated their cellphones and money before their forced deportation by boat. Supporting these claims, Turkish officials said most migrants illegally deported back to Turkey were injured, with a number of bruises and dog bites.

If reaching Greece is one challenge for migrants, staying there is another, as two migrants trying to return to Turkey from Greece showed. Two men, a 32-year-old Syrian and a 28-year-old Egyptian, were captured as they were heading back to Turkey after they stole a boat on the Greek island of Chios early Thursday.

Frontex, the border security force for the European Union that patrols the sea, discovered the duo as they were leaving the island and seized them. The two men are being charged with theft and have been handed over to Greek police. They were apparently not pleased with the living conditions in Greece though many endure difficulties for months, in the hope of being allowed into other European Union countries.

Some 60,000 asylum seekers are trapped in Greece after European countries, one by one, started closing their borders in the face of the rising refugee influx, especially from war-torn Syria, a neighbor of Turkey. In the decrepit camps, migrants struggle with winter conditions, facing illnesses while living in makeshift tents in chilling weather. Nongovernmental organizations criticize Greece for not offering suitable living conditions for refugees.