Turkish women rally behind democracy ahead of constitutional referendum 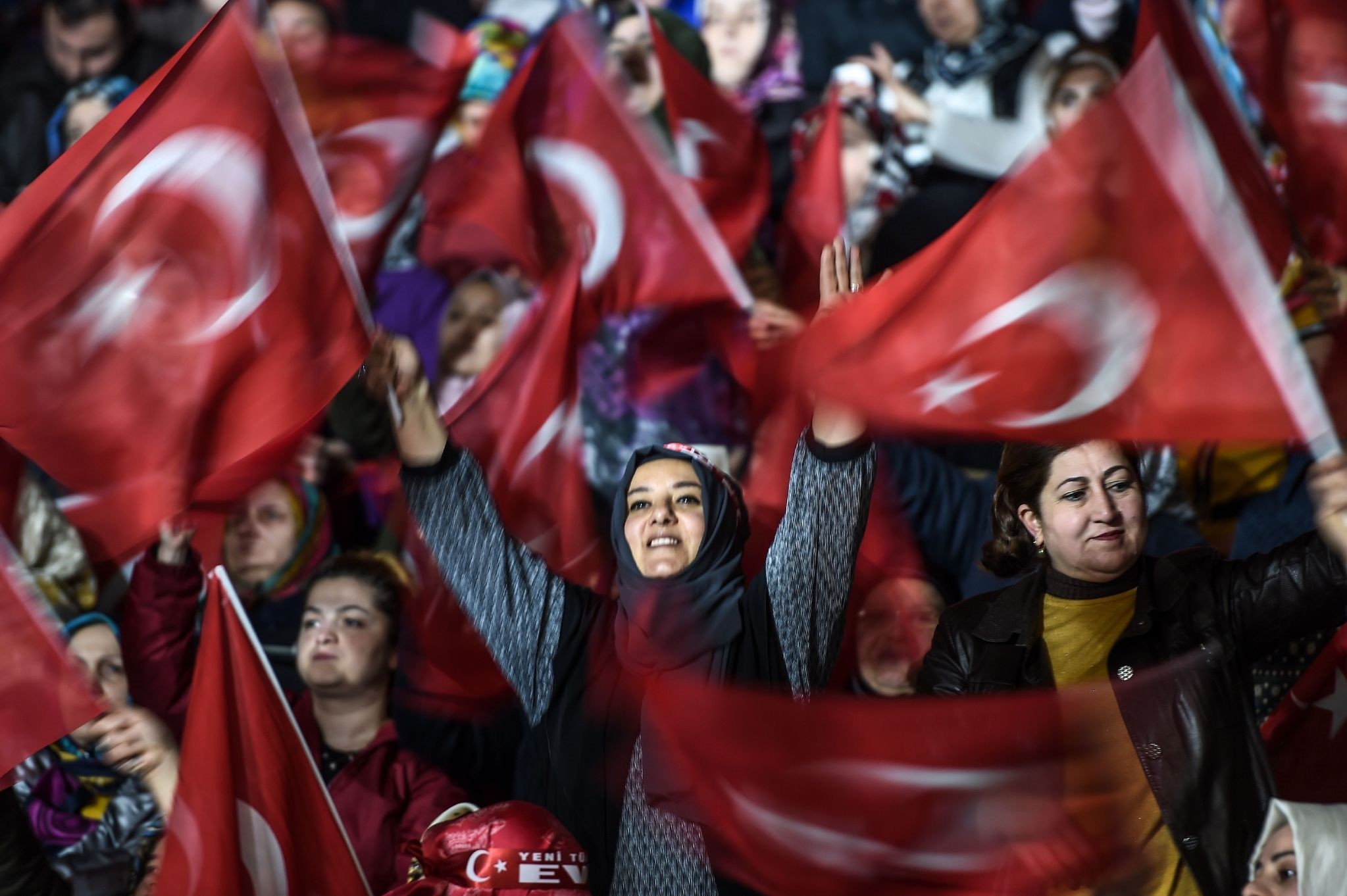 Women wave Turkish flags at the event which was also attended by Erdou011fan and prominent womenu2019s NGOs representatives.
by Daily Sabah with AFP Mar 06, 2017 12:00 am

Thousands of women from around the country gathered in a sports hall in Istanbul on Sunday for perhaps the largest gathering of its kind, the Women and Democracy Meeting. The event, first held in 2014, is the brainchild of the Women and Democracy Association (KADEM) and aims to make women's voices heard for democratic progress in the country as Turkey counts down to a significant referendum in April for constitutional changes. The event is co-sponsored by the Ministry of Family and Social Policies and the Istanbul municipality, and some 200 women's nongovernmental organizations sent representatives to the convention; which highlights the increasing role of women in civic society and politics.

With the motto: "Yes! Democracy Exists If There Are Women," the event hosted panels and speeches on the stories of women who fought for the country and democracy. It also gives a platform for women to show their support for democracy in the upcoming referendum that will change the governance system in the country.

President Recep Tayyip Erdoğan said at the event that democracy without the participation of women and the youth cannot be sustainable.

"The secret of my political success is accomplishing the goal to include more women in the democratic process and politics," the president said.

The president gave examples of women fighting for democracy and how they became heroes.

"Our 11 sisters martyred on July 15. They had faith, and their faith did not daunt them (in their struggle for democracy)," Erdoğan said, referring to women who died while confronting pro-coup troops during the foiled putsch bid last year.

"Mother Khadija became a companion to the Prophet in his cause and did not abandon him. Women gathered here follow her example, and I believe your determination, your fight for democracy will contribute a lot to Turkey's struggle to expand its democracy," Erdoğan stated, referring to the upcoming referendum that is promoted to give more say to the president in state affairs; therefore, giving a boost to the power of the electorate who are set to elect him or her.

Erdoğan said women's issues could be solved only if women are treated as human beings.

"Look at the countries speaking a lot about women's rights. They all have a dark history when it comes to women. They did not treat women as human beings and viewed them in a level lower than animals. Today, they passionately advocate women's rights, in a bid of redemption for their dark past," he said.

"Women were not regarded as human beings in the past, but today, they are objectified, and they face modern slavery," he said, referring to women's sexual objectification.

He said Turkey does not adopt a foreign model to boost women's rights, as it already has an ancient philosophy for women's rights.

Erdoğan also criticized viewing domestic violence as something to do with the faith and culture.

"If a woman is subject to violence, you cannot blame the religion or culture for it. In our faith and culture, women are in an esteemed position. She is not equal to men; she is in a far higher place. We even call our country our motherland, not the fatherland," he stated.

Erdoğan added that women have a say in everyday affairs and "a determining factor" in social life. He said "the mistakes of a few psychopaths" couldn't be linked to Turkey's faith and traditions, in reference to domestic violence perpetrators.

"The state certainly punishes them, and society weeds them out through social pressure," he said.

Erdoğan said it was a humanitarian task to side with women facing discrimination and injustice.

"Men create crises, and women pay for it all across the world. For instance, in Syria, a humanitarian crisis is in its sixth year. Women lost their husbands, their homes and they suffered more than anyone. Women have a great burden when they work in factories and farms and while doing household chores and rearing their children, and our task is to ease their burden," he stated.

Director of KADEM Sare Aydın Yılmaz in a speech said, a struggle for democracy "without participation of women" is doomed to fail and an underrepresentation of women in politics and governance was a shortcoming for any country aiming for development and prosperity.

She said that they gathered as women of "seven regions of Turkey" who "overcame their differences for their common respect of human rights."

Yılmaz said that they convened to "make the right decision" in the upcoming referendum.

"Our decision is obvious and we believe a new presidential system will empower democracy, will pave the way for bringing peace between the nation and the state again. It will make the public unconditional owner of sovereignty, which has previously been under the tutelages of others," she said, referring to the powerful, secular elite made up of military, judiciary and other actors that have been behind the coup attempts in the past.

Speaking to reporters during the event, Ayşe Gürcan, a participant who traveled from the eastern province of Erzurum for the event, said, "For the survival of our country, it is a very important decision. We must make our choice in a healthy way, and I believe that everyone will say 'Yes'."

Another woman, Zehra Ferahtay, said the approval of constitutional changes would unify Turkey, especially after the failed coup attempt in July to topple the government.

"Yes, I support the presidential system, and especially after July 15, we must be more united and together for this country," she said.

Saliha Mantar said women had been granted more rights since Erdoğan came to power as prime minister in 2003 and as president in 2014.

"We, women, promise to always be behind our leader," she said, referring to Erdoğan.
RELATED TOPICS