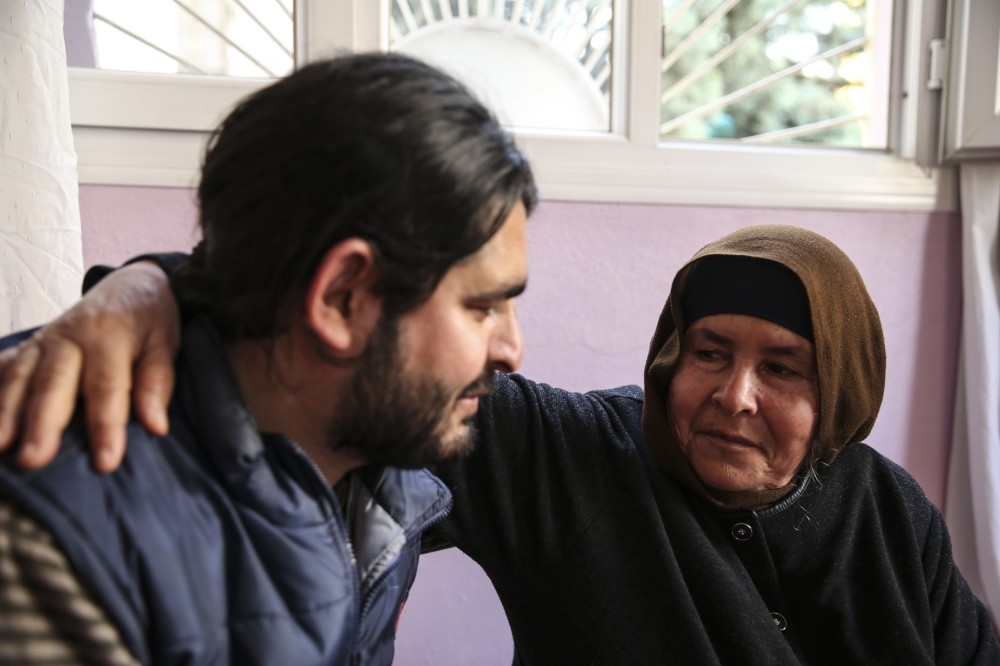 by Daily Sabah with AA Mar 11, 2017 12:00 am
Most families forced to flee their homes in Syria have a dramatic story to tell, either from the loss of a parent, child or sibling. For Abdurrahman Dede, 32, a Syrian Turkmen, it was how he ended up in Turkey three years ago, leaving behind a mother in his war-torn country. The mother and son were finally reunited in Turkey when she managed to flee her hometown in Turkey. Dede, who lives in Turkey with his relatives, long believed his 62-year-old mother likely died during the conflict that has torn apart families and killed thousands since it broke out six years ago. On the other side of the border, his mother Nazo was clinging to the hope that Abdurrahman was still alive, after her two other sons were killed in the conflict.

Three years on, with the help of a relative, Nazo managed to flee her hometown of Raqqa and reach Turkey. Tracing her relatives, she finally reunited with her son in Reyhanlı, a small Turkish town on the border with Syria that houses thousands who fled to Turkey.

"I thank God thousands of times for having my son again. I still can't believe how I survived in Syria. In Raqqa, there were bombings, attacks every day," she told Anadolu Agency (AA). "I will never forget what I went through in Syria. I saw many people dying next to me," she recalls. "[Abdurrahman] was my only reason to keep my hope to survive," she said. The elderly woman remembers a few nights she did not sleep because she was so overwhelmed with joy to learn her son was alive and in Turkey.

Abdurrahman Dede said he lost contact with his parents who were living in another quarter of Raqqa while in Syria and decided to leave when he was unable to find them as the raging war threatened their lives. Neither he nor his mother know where his father is after he went missing one day at the height of the attacks in the city where the terrorist group, Daesh, long maintained control. "I was very surprised when I found out that my mother is alive. May Allah not take her away again and I pray for all mothers who died in the war," he said.
Last Update: Mar 12, 2017 2:48 am
RELATED TOPICS