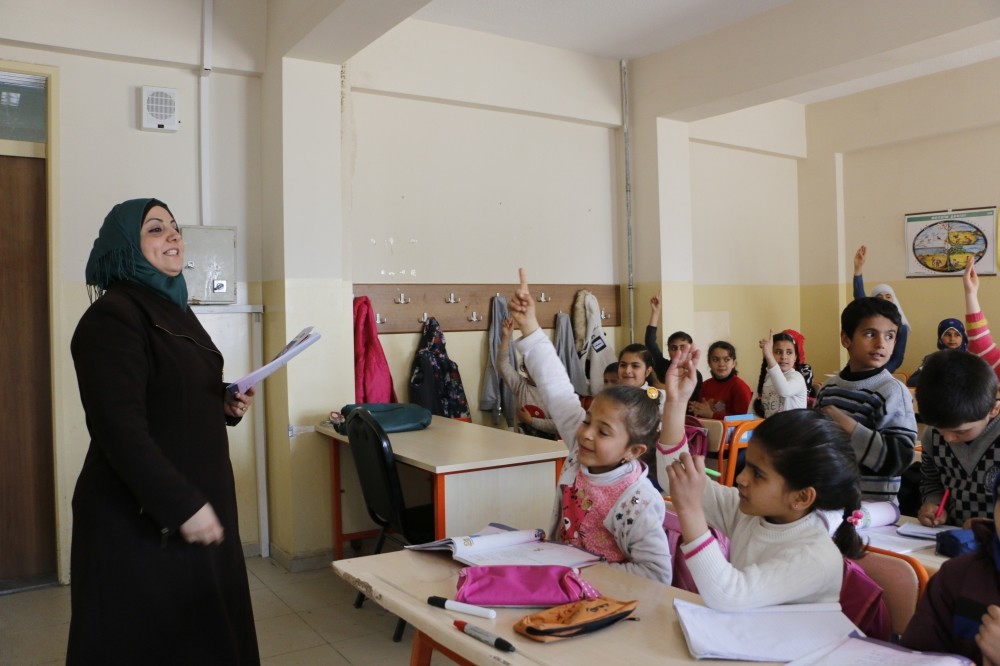 A Syrian female teacher teaches a group of refugee children in u015eanlu0131urfa. Most refugees are women and children who are viewed as most vulnerable members of the refugee community.
by Buğra Olaç Mar 18, 2017 12:00 am

The latest figures show 72 percent of Syrian refugees who took shelter in Turkey are women, children and the elderly, as the country strives to address their humanitarian needs with little help from outside

At a time of heightened hateful debate by the opposition about refugees, the latest figures by Turkey's migration authority shows that women, children and the elderly make up about 3 million Syrian refugees who have taken shelter in the country.

Ankara strives to offer humanitarian services to refugees who fled the ongoing civil war in neighboring Syria but the opposition repeatedly calls on Syrians to "return to their country to fight for it."

Figures based on biometric data collected from Syrians by the Directorate General of Migration indicate that 2.1 million refugees are women, children and people of a senior age, showing they are not exactly ideal recruits for Syrian rebels who already struggle to gain an upper hand in their battle with pro-Assad forces outgunning them. Men between the ages of 19 and 60 only consist of 27 percent of the total number of refugees while children make up almost half.

The exact number of refugees was announced as 2,956,454 people and slightly more than 1.5 million are males, the figures, as of March 9, show.

The total number of refugees surpasses the population of Bursa, Turkey's fourth largest city, but only a tiny fraction of refugees live in modern refugee camps set up in cities near the border. Only 264,089 refugees from Syria live in 22 refugee camps run by the Disaster and Emergency Management Authority (AFAD).

The figures show a total number of 356,337 children from infants up to boys and girls at the age of four are among the refugees while 4,047 octogenarians and nonagenarians also took shelter in Turkey.

Syria this month marks the sixth year since the start of the uprising against the Assad regime that, in time, evolved into an all-out civil war as the Assad forces have been violently crushing the opposition. The number of Syrians taking shelter in Turkey, the only country in the region able to accommodate the huge influx of refugees, peaked in 2014, the figures by the migration authority indicate. While only 14,237 Syrians arrived in Turkey from Syria in 2011-2012, it rapidly rose in the subsequent years and reached 1.5 million between 2013 and 2014. The number increased to 2.5 million in 2015 and more than 300,000 were added to the figures last year.

With no end in sight to the conflict where new actors such as the terrorist group Daesh emerged, more Syrian refugees can be expected to head to Turkey. Turkey repeatedly calls on the international community to further help address the humanitarian needs of the refugees but Ankara complains the calls often fall on deaf ears. Turkish authorities say they have spent billions of dollars on the refugees while the sum of international donations remain way below the money it spent alone for the refugees. To end the refugee influx, the country advocates for the formation of a safe zone within Syria while it supports rebels fighting Daesh.

Speaking to the media on Friday, Deputy Prime Minister Veysi Kaynak, who oversees agencies helping refugees, said they continue to work to make Syria safe for refugees to return. A small number of refugees have already returned to Jarablus, a town liberated from Daesh, while rebels make further territorial gains across Syria in Turkey's Operation Euphrates Shield. "Security restored in an area of 2,000 square meters in Syria by the Free Syria Army backed by [the Turkish] army. Our priority is humanitarian aid to people in those areas," he said. Kaynak added that they desire to see Syrians living in Turkey return to their lives before the conflict. "We also hope that refugees living in difficult conditions across the world will be able to return to their country," he said.

Turkey also plans on giving citizenship to Syrians. Government officials said that citizenship is not currently on agenda but can be implemented after next month's constitutional referendum.

Sensing that the refugees are here to stay for a longer period, Turkey also is also working for their integration. Beginning last year, Syrian refugees are being given work permits. The country also plans to end the disturbing phenomenon of the "lost generation," the children who had to skip education or lost parents during the war, and continues to work towards enrolling more Syrians in schools.
RELATED TOPICS