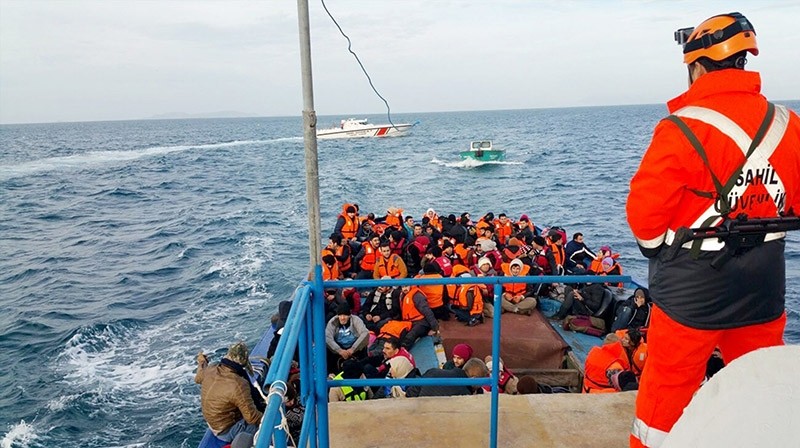 The number of asylum seekers caught crossing the Aegean Sea between Turkey and Greece has fallen by 85 percent since a deal was signed with EU last year, according to data compiled from the Turkish Coast Guard Command Tuesday.

March marks the first anniversary of the refugee deal between the EU and Turkey.

According to official data, 16,627 refugees were intercepted in the Aegean after the Turkey-EU deal while this figure was 111,133 a year before the agreement.

The data shows that between April 2015 and March 2016, 437 people drowned while attempting to reach Greece. This figure fell by 95 percent to 20 since the deal was signed between Ankara and Brussels.

The data seems to reflect the success of the EU-Turkey readmission deal that came into effect last March to cut illegal migration and clamp down on human trafficking.

Tens of thousands have attempted the short but dangerous journey across the Aegean before heading to northern and western Europe.

The International Organization for Migration estimated there were more than 363,000 arrivals in Europe by sea last year.

Under the deal with the EU, Turkey has stepped up its efforts to prevent migrants from reaching EU member Greece via illegal routes and has agreed to take back those who land in Greece in return for the resettlement of Syrian refugees in Europe.

The March 2016 EU-Turkey statement envisaged a "one-for-one" formula under which failed asylum seekers in Europe would be returned to Turkey while Syrian refugees would be resettled in EU states under a quota system.

However, a report published by the European Commission earlier this month revealed the numbers promised in the EU-Turkey statement have not been realized.

Turkey also remains unhappy over the failure to introduce visa liberalization for its citizens, plus a lack of delivery on funding commitments by Europe for the welfare of refugees.