One year on, EU fails to stick to migrant deal with Turkey 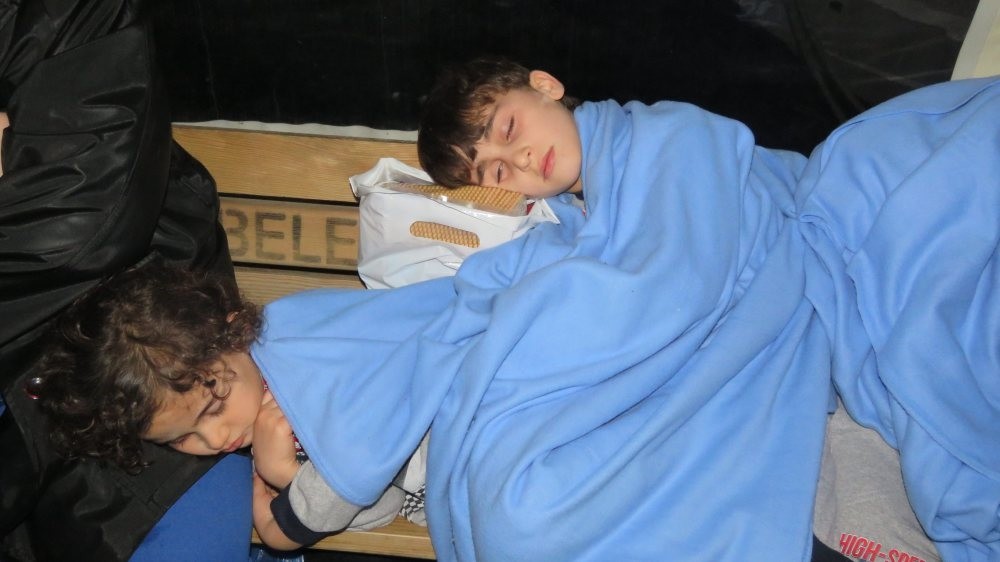 Two children rescued from a migrant boat that sank off the Turkish coast sleep on a bench at the Ku00fcu00e7u00fckkuyu port they were taken to in February.
by Daily Sabah with AA
Mar 21, 2017 12:00 am

Yesterday was the first anniversary of an agreement between the EU and Turkey to curb the influx of migrants to the bloc. The EU has so far admitted only a small fraction of refugees per its deal with Turkey while it has not fulfilled Turkey's conditions that include the visa-free travel agreement

Once teeming with refugees waiting to board the first boat heading to the nearby Greek islands, western Turkey's Aegean shores are nowadays calm, save for the occasional group of illegal immigrants.

This is, in large part, thanks to an agreement between Turkey and the European Union. The agreement, implemented one year ago, resulted in tighter control of the refugee influx to nearby Greece from Turkey.

Nevertheless, Turkey laments that EU countries, the favorite destination of immigrants and refugees from the Middle East and Asia, failed to do its part of the deal.

The EU, which foresaw admitting 72,000 refugees from Turkey in line with the agreement, agreed to settle only 3,565 migrants in European countries so far. It did not, meanwhile, fulfill its pledge to Turkey for the visa-free travel of Turkish citizens.

More importantly, only 750 million euros were allocated so far for the care of refugees in Turkey, far below the pledged three billion euros for the country that hosts nearly three million refugees from Syria.

Turkish politicians have repeatedly accused Europe of dragging its feet to undertake the deal while EU officials apparently are acting reluctantly amid ongoing, politically-charged tensions with Turkey.

Despite the failure of the agreement, figures show that the number of illegal immigrants who sought to reach to the Greek islands closest to the Turkish shores on dinghies has significantly dropped.

For instance, 845,000 migrants had crossed into European territories between April and December 2015 via Turkey while that number dropped some 97 percent in the same period last year.

As part of the agreement, the two sides had devised a "one for one" formula that would settle one Syrian refugee from Turkey in a European country, in exchange of the readmission of one Syrian who arrived in the Greek islands via Turkey.

The exchange started on April 4, 2016 and its ultimate goal was to stop the refugee influx at the gateway of Europe as more and more were looking to reach Germany, which is viewed as a Western haven for refugees fleeing war and poverty.

A quota of 72,000 was set and Turkey also planned to sign bilateral agreements with EU countries willing to take more refugees from Turkey.

A recent report by the European Commission shows only 3,565 Syrians were taken from Turkey while 1,487 refugees who reached the Greek islands were sent back to the country. This raises concerns in Turkey, which is still a developing country that has suddenly found itself burdened with a hefty migrant flow after civil war broke out in Syria six years ago.

The EU had also promised to Turkey visa-free travel in exchange for the implementation of the refugee deal but the issue, critical for Turkey which has been seeking accession to the EU for decades, was constantly pushed back due to political bickering.

The EU put forward several excuses, especially what it called Turkey's lack of adapting laws in line with EU standards, while Ankara rejected stopping its anti-terror efforts that would be harmed by the adaptation process.

On the financial side, the EU had pledged 3 billion euros to address the needs of Syrian refugees in Turkey. According to the deal, the first tranche of the aid would be followed by an additional three billion euros by the end of 2018. Yet, a European Commission report shows the monetary pledge dropped down to 2.2 billion euros and only 750 million euros have been transferred to Turkey.

Turkey, meanwhile, is looking on the bright side as the number of illegal immigrants has significantly dropped.

Only 23,650 migrants managed to sneak into the Greek islands through Turkish waters since the implementation of the EU-Turkey deal. In the past months, the number was 2,900, a sizable drop compared to the past two years when sometimes tens of thousands crossed into Greece monthly.