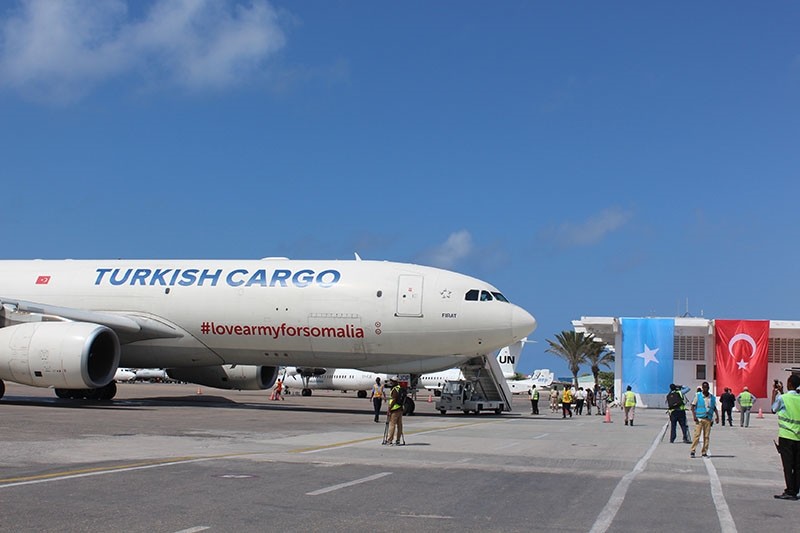 An international campaign calling on Turkish Airlines to send planes loaded with aid to drought-hit Somalia achieved its goal, as a plane carrying 65 tons of baby formula for the African country landed in Mogadishu

A Turkish Airlines (THY) cargo plane carrying over 60 tons of food aid and medical supplies arrived in Somalia's capital city, Mogadishu, on Tuesday as part of a global aid campaign by Turkey's flagship carrier.

The use of the plane, emblazoned with the campaign's twitter hashtag #LoveArmyForSomalia, was donated by Turkish Airlines.

The plane's cargo was delivered to the needy yesterday. Humanitarian aid was collected thanks to a campaign initiated by social media phenomenon Jerome Jarre and soon received an endorsement from actor Ben Stiller and social media celebrities who helped attract more donors, ultimately collecting more than $2 million in less than a day. Some 80,000 donors from 125 countries contributed to the campaign. THY pledged that 200 tons of aid will be flown to Somalia in the next six months as part of the campaign.

Baby formula for malnourished Somalian infants was brought to the Mogadishu airport by a THY Airbus and Somalian government ministers were among those welcoming the plane. In a ceremony after the flight landed, Turkey's Somalia Ambassador Olgan Bekar said they were proud that THY has taken part in the aid campaign for Somalia. He noted that the Turkish carrier has been the only airline with direct flights to the African country since 2012 and Turkey has always been a donor to Somalia. "All Turkish institutions and agencies work to help the Somalian people," he said.

Seda Kalyoncu, THY's corporate communications manager, said Turkey and Somalia have developed closer ties in recent years and Turkish leaders have been frequent visitors to the country. "THY, the Turkish Red Crescent and government agencies have long been active in Somalia in terms of humanitarian assistance. Turkish companies also played a role in developing infrastructure in the country. THY heeded the call for aid and pledged to carry everything collected in this campaign to Somalia. We are grateful to Jerome Jarre and all donors making this flight possible," she said.

An unprecedented drought in the African country has threatened the lives of millions, and Turkey, which has established the closest relations in its history with the war-weary country in the past decade, mobilized both humanitarian and development aid to address Somalians' needs.

The International Committee of the Red Cross warned recently that the international community had four months at most to save millions of people in Somalia from starvation.

Turkey is among the donors supplying food to Somalia and 380 tons of food aid supplied by the Turkish Cooperation and Coordination Agency (TİKA) and Disaster and Emergency Management Authority (AFAD) of Turkey were delivered to drought-hit regions on Sunday. The food aid will benefit 12,000 families in Baidoa, Galkayo, Mogadishu, Kismayo and Laascaanood, and Turkey plans to send a ship loaded with 11,000 tons of food aid to the country next month.

Since 2011, the Turkish Red Crescent has provided humanitarian aid amounting to $38 million, from food to tents and beds. Adding aid from other state-run Turkish aid agencies, Somalia received humanitarian aid worth $121.9 million from Turkey in the past six years.

The country was the second-largest donor of humanitarian aid to Somalia last year.

TİKA, Turkey's development agency, also provides help to Somalia to improve the income of locals. Somalian farmers are major recipients in TİKA projects, which included the donation of tractors and training for farmers and fishermen. TİKA had also helped with the construction of a modern hospital in Mogadishu, which opened two years ago.