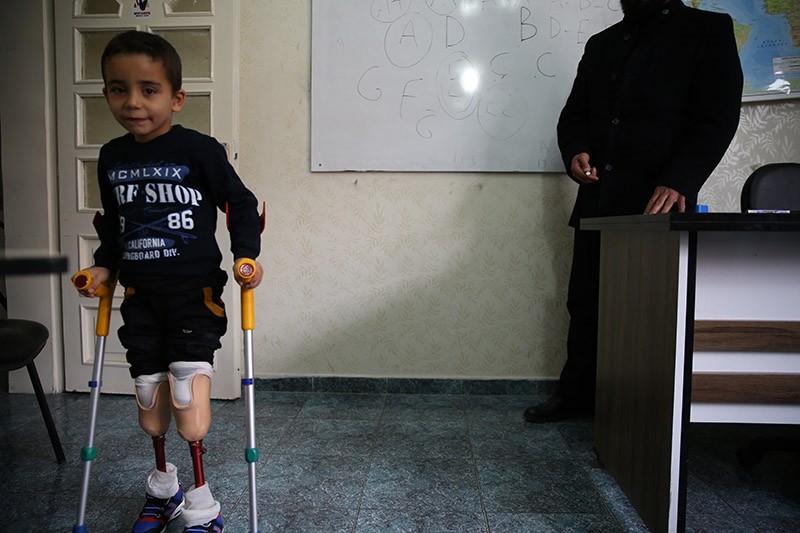 Six-year-old Muhammed Amut lost his father and both of his legs during a regime airstrike in Syria's Idlib, but he holds the hope that one day he will be able to play football again with the use of prosthetics.

Muhammed's father, Usame, died during an Assad regime airstrike that hit the family's home five months ago. Muhammed was seriously injured under the wreckage, and had to have both of his legs amputated below the knee. Along with his mother, Gadi, and his older brother and sister, Muhammed traveled to Turkey where he was recently discharged from the hospital after months of treatment in Gaziantep.

Last month, Muhammed received temporary prostheses thanks to the Darul İhsan Association, and is now able to take steps with the use of crutches after physical therapy. The six-year-old wants to be healthy and his biggest dream is to play football, which could be a possibility with the help of electronic prosthetic technology.

Ali Kırmızı of the Darul İhsan Association said that the organization did their best to help Syrians who came to Turkey and to assist them in the healing process.

Explaining the organization's training activities for Syrians, Kırmızı said, "We teach those who are here reading and writing and then we send them where they want to go."

There are about 60 injured Syrians in the care of the association, Kırmızı said, but little Muhammed has affected everyone at the organization.

"We had a temporary prosthesis on little Muhammed. This works for now, but he cannot walk very well. At this point we are going to apply electronic prosthetics. Even though it's not like having a real foot, we will see how useful it is," he added.

Kırmızı explained that the new prosthetics are quite expensive, and that the organization was still looking for financial support from benefactors.

Turkey now hosts some three million Syrian refugees, who have been fleeing violence in their home country since 2011. The conflict has left more than 320,000 people dead, according to the Syrian Observatory for Human Rights.