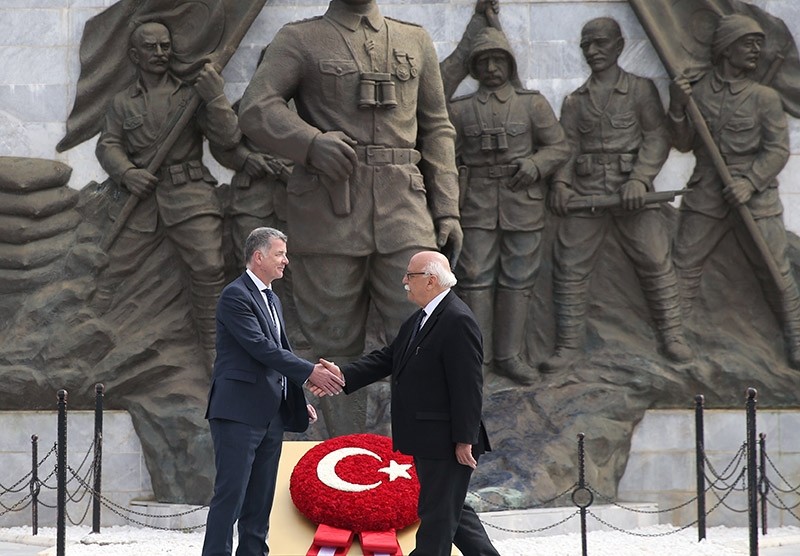 The 1915 battle that changed the course of World War I at the cost of thousands of lives from the Allied forces and the Ottoman army was remembered in Çanakkale, the Turkish city where it was fought, in ceremonies attended by Turkish, British, Australian and New Zealander officials

The "martyrs" of the Çanakkale battle, where thousands of Ottoman Turkish troops and Allied soldiers were killed during World War I, were remembered in ceremonies yesterday. The ceremonies were also attended by representatives of the countries that dispatched soldiers to fight Turkish troops 102 years ago.

One day before a traditional remembrance ceremony for the Australian and New Zealander troops killed in the fateful battle that stopped the Allied forces' invasion of modern-day Turkey, those who fell on the Ottoman side were commemorated near the battlefield. Poems and prayers were recited in memory of the soldiers during the ceremonies attended by Turkish Culture and Tourism Minister Nabi Avcı, Australian Foreign Minister Julie Bishop, New Zealand's Justice Minister Amy Adams and British Ambassador to Ankara Richard Moore. The Ottoman janissary band, Mehter, performed a concert while Turkish troops, troops from the then-Allied countries and veterans attended a parade for the occasion. Solotürk, an aerial stunt team from the Turkish military, also performed at the ceremonies.

"The Çanakkale battle was not only about defending people's lives. It was also about defending the honor of a country through young troops. All of the generations that have come after those who died in 1915 should embrace the spiritual heritage left behind by the fallen. It is our nation's duty to preserve this victory which was full of examples of guarding with honor," Avcı said. Çanakkale hosts the eponymous straits, also known as Dardanelles, and was a vital waterway for the Allied troops to reach Istanbul, the capital of the Ottoman Empire. After a naval campaign failed to stave off the outnumbered Ottoman troops, the Allies launched an amphibious landing which decimated the majority of the Ottoman troops stationed there. However, the Ottomans managed to cling to this relatively small patch of land for months before the Allies finally evacuated the area in December 1915.

Making a speech in Turkish at the ceremony, British Ambassador Richard Moore said Çanakkale was a place where "half a million soldiers, young men, fathers, husbands, sons and brothers died" during a nine-month period. "Here, great statesmen, like [Winston] Churchill, were humbled and new national heroes, like Mustafa Kemal Atatürk, rose," Moore added, referring to the then First Lord of Admiralty who proposed the disastrous naval campaign in Çanakkale. Atatürk, an Ottoman military commander credited with the victory of the Çanakkale campaign went on to become the founder and first president of the Republic of Turkey, a country built on the ashes of the Ottoman Empire. Churchill later made a successful comeback as the prime minister who successfully navigated the British through World War II. "One-hundred-and-two years ago, our nations fought against one another in a bloody conflict, yet today, we meet here as friends, in mutual respect and admiration. Perhaps, this is the most optimistic lesson that we can draw from our remembrance," Moore added.

The ceremonies were wrapped up with visitors laying wreaths and flowers on the graves of the Ottoman troops and Allied soldiers that died during the land campaign.

In separate events, visitors from Australia and New Zealand whose Australian and New Zealand Army Corps (ANZAC) troops fought in the Çanakkale campaign, will attend remembrance ceremonies for the fallen early Tuesday.