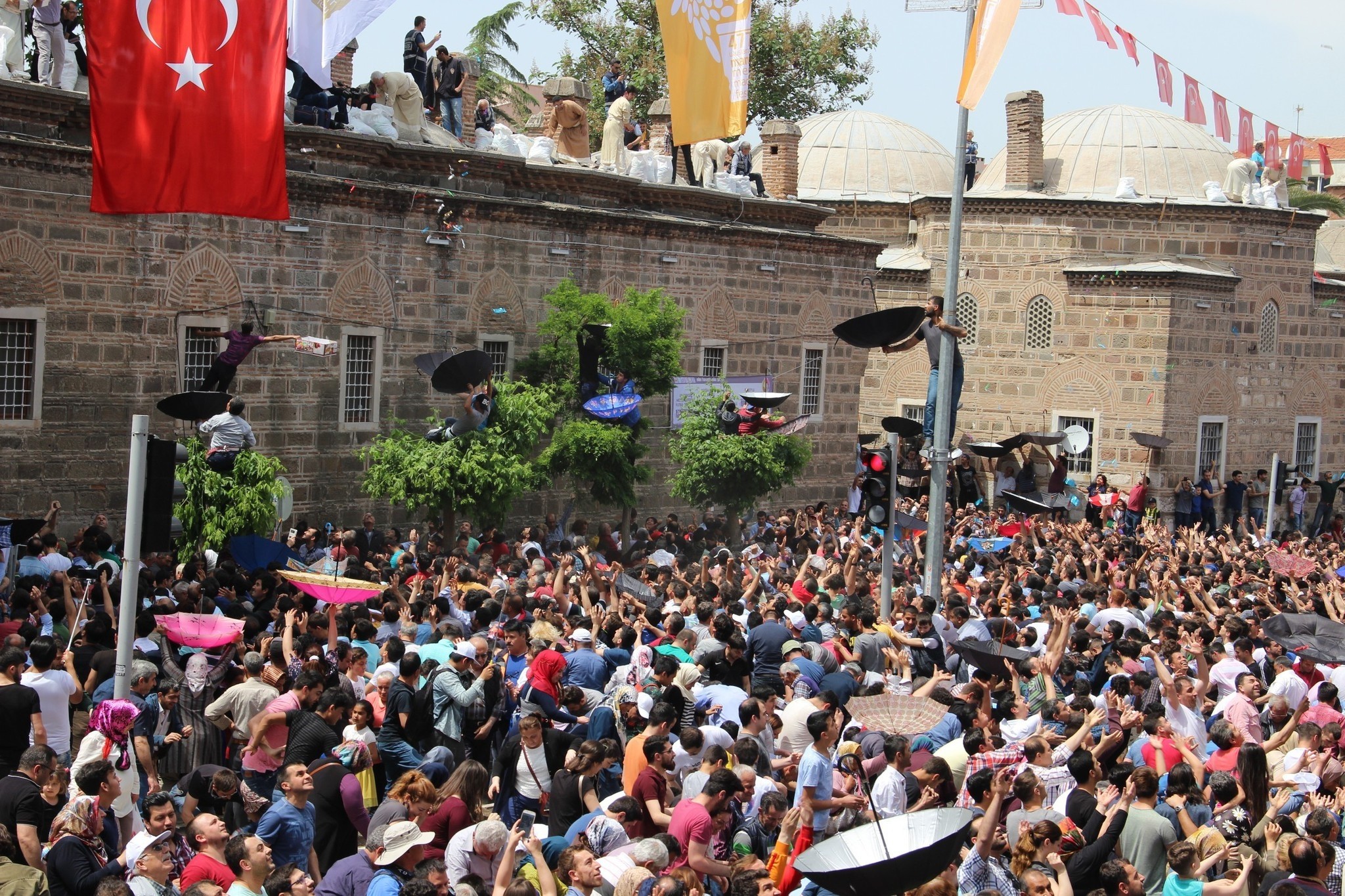 A large crowd gathered to grab a piece of mesir outside the Sultan Mosque and other locations where the paste was delivered to thousands.
by Daily Sabah May 01, 2017 12:00 am

Mesir, a sweet paste with a history dating back nearly 500 years, continues to attract those who believe in its therapeutic effects. Thousands of people gathered in western Turkey yesterday to grab the sweets delivered for free in an annual festival dedicated to the Ottoman delicacy

Turkey's second oldest festival, the Mesir Festival in Manisa, a western city, which was the favorite destination of heirs to the Ottoman throne, once again attracted thousands of people yesterday. Visitors gathered outside a mosque, where colorful and slender packages of mesir, a sweet paste believed to have therapeutic effects, were tossed on the crowd from minarets and domes. Some six tons of the paste were delivered for free to the crowd celebrating the 477-year-old festival.

The handout of mesir is a culmination of the weeklong festival, observed with concerts, exhibitions and several public events as probably the most anticipated time of the festival to celebrate the paste that made it into the prestigious UNESCO list of Intangible Cultural Heritage.

Mesir would not be as famous as it is today if it were not for an Ottoman queen and a local physician. Ayşe Hafsa Sultan, the mother of Suleiman the Magnificent, contacted Merkez Efendi when she caught an incurable disease. Merkez Efendi, who was working as a custodian at Sultan Mosque in Manisa as well as a physician, went on to prepare the fabled paste with 41 different spices and managed to heal the queen. She was so pleased with finding the treatment that she ordered free delivery of the paste to the public, a tradition that in time, evolved into a festival.

According to common belief, a person who eats mesir paste will not get stung or bitten by a venomous animal during the year, and if seriously ill people eat mesir paste on the day of Nevruz (a day marked as a spring festival by Turks and Turkic communities) their health will get better. Also, it is believed that any woman at the age of marriage who eats mesir paste will get married within the year. Additionally, it is said to increase sexual stamina, helping childless couples to conceive, and it is good for childhood diseases.

The festival is also unique for the role of women. For this year's festival, 15 women sponsored by a tourism board set up to promote the paste prepared five tons of the paste in accordance with the original recipe.

"Our mesir paste is produced entirely with the help of 15 female workers, without the hands of men touching it. Only the marketing department has male workers," Özlem Erdem, the general secretary of the association promoting mesir, told Anadolu Agency (AA). Proud to be using the same technique for centuries, Erdem said, "We are very careful to produce it in the most proper way, while adhering to the tradition. We use absolutely no technology in producing the mesir paste." Erdem expressed that the paste is consumed not only in Turkey, but also enjoyed by people living abroad, "Exports continue to go to Germany and Russia. In addition, this year we received a request for a large amount of mesir paste from Dubai and our negotiations continue." After the paste has been prepared, the team of women wrapped the spicy candies into small pieces of paper. The mesir paste was then blessed by 28 imams per tradition before being delivered to the public.
RELATED TOPICS