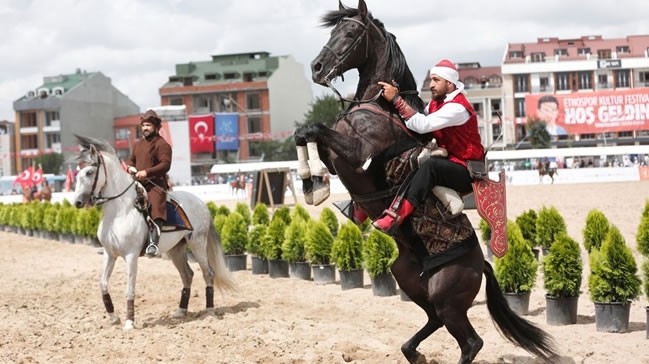 The latest edition of the Ethnosports Culture Festival is set to start on Thursday. Organizers expect nearly 1 million visitors and plan to make future events for traditional Turkic sports ‘a competition of an Olympic scale'

Horseback archers, wrestlers and javelin throwers will mingle with mangala board game players while visitors sample Turkic cuisine in another corner. This is what the Ethnosports Culture Festival to be held on Istanbul's Marmara coast on Thursday will look like. The second edition of the four-day festival is currently limited to Turkey but organizers are ambitious and say they plan to expand it further in the future to "a competition of Olympic scale."

Speaking to Anadolu Agency, Hakan Kazancı, deputy chairman of the World Ethnosports Confederation that organizes the event, says they expect up to 1 million visitors to this year's event that was relocated this year from the Küçükçekmece district to the sprawling Yenikapı Square.

Kazancı said organizers are working around the clock to "make the festival a memorable event for visitors."

"We hope to make it a global event in the next five years, to promote the sports our ancestors favored, to turn the festival in to a kind of Olympiad," he said. Kazancı added that their federation aims to revive forgotten sports from ancient times around the world.

"This year, we have guest competitors from Kyrgyzstan but it will be a more international event, on a global scale, in the following years," Kazancı said.

In Yenikapı, cranes and workers put the final touches on tracks and venues where archers, wrestlers and players of several obscure sports mainly from the Turkic world will compete while stands that will house samples of Turkic cuisine and handicrafts are being installed. The square, best remembered for last year's democracy rally where thousands gathered to voice their opposition to the July 15 coup attempt, will likely attract more visitors than last year's festival held immediately after the foiled putsch bid, Kazancı says. "We had some 150,000 registered visitors last year and we saw a growing interest in the festival this year," Kazancı says about his turnout projection for this year's event.

Forty-three yurts are installed at the square in the tradition of nomadic Turks who wandered to present-day Turkey and Iran to Eastern Europe centuries ago. Representatives of 14 Turkic communities from mostly ex-Soviet republics will showcase their culture in the stands inside the yurts. Yurts will also house workshops to introduce the ancient culture to visitors and playgrounds for children, who will have the opportunity to ride ponies in line with the equestrian theme of the festival.

The festival, which will be free of charge, will also include traditional oil wrestling for the first time this year. Overall, athletes will compete in 12 sports.

As many as 843 participants will compete in the festival in many different categories this year. The festival will also include a section dedicated to children who will get the opportunity to learn about 26 games that children in ancient times played. Another segment is dedicated to handicapped athletes in mas, a type of wrestling, in mangala, a board game competition, and in traditional archery events.